[dropcap]Tucked[/dropcap] into the woods in north Bentonville, Crystal Bridges Museum of American Art has delighted guests from around the world wishing to see the fine art displayed in its galleries. And this month, a new museum is opening its doors with the goal of expanding young minds to think about and focus solely on the creative process of making.

The Scott Family Amazeum, the newest addition to the Arkansas Discovery Network of science-based museums, broke ground in June of 2014, but key staff and board members were hard at work for several years before any shovels hit dirt. Resources were tapped, talent was hired, and partnerships were made to bring the grand idea of a children’s museum in northwest Arkansas to life.

Sam Dean, Amazeum’s founding executive director, relocated to northwest Arkansas in 2013 from San Francisco’s world-renowned Exploratorium. He is confident the Amazeum will be one more reason that northwest Arkansas will be added to anyone’s short list of places to visit or raise a family.

“When looking at all of the amazing things that are happening in northwest Arkansas, we are so thrilled to be a part of that exciting, creative energy,” Dean said. “There is a fantastic ecosystem of educational and cultural institutions already in the area that we are honored to join.”

Originally called “The Children’s Museum of Northwest Arkansas,” then just “The Amazeum,” the museum announced the addition of “Scott Family” to the name this year, honoring the contributions of the Lee and Linda Scott family. Their son, Eric, and his wife, Elda, have been dedicated supporters of the museum since its inception.

The Amazeum is located at the corner of NE J Street and Museum Way. Its striking architecture gives passersby a clear idea of the kind of environments to be found inside the 50,000-square-foot structure. Glass walls and expansive windows provide natural light, and Arkansas-harvested wood beams soar along the ceiling in the main activity area. Surrounding the building, an acre of native plantings and open lawn invite families to bring a picnic and enjoy their stay. 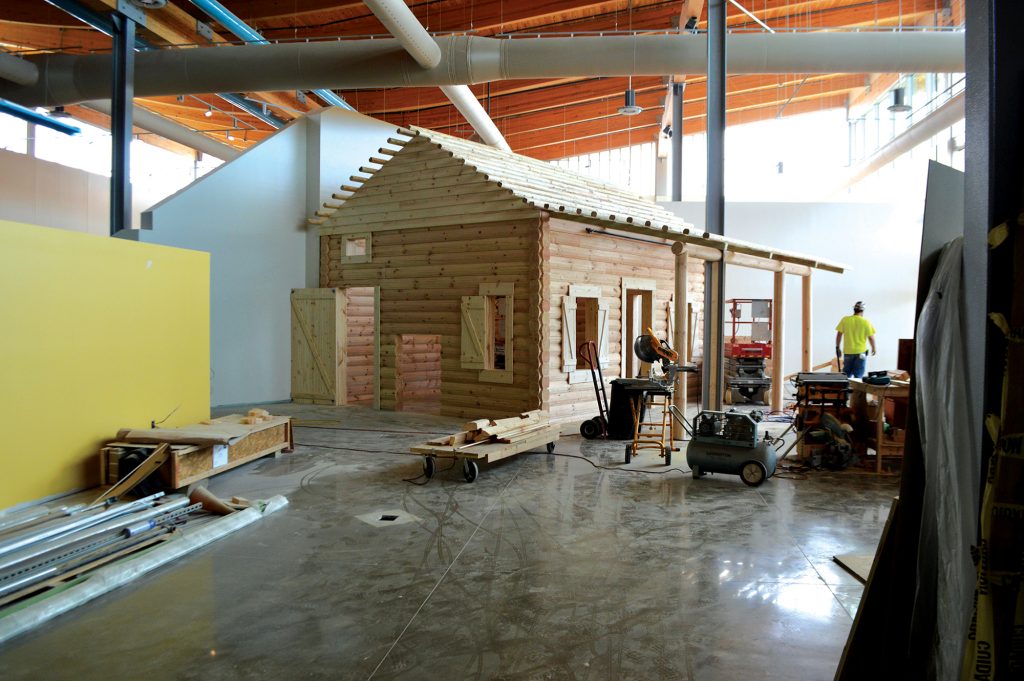 The Homestead Cabin and Farm, shown in progress here, is dedicated to honoring the long history of agricultural and creative heritages in Arkansas. The exhibit will include a faux sow and piglets, in addition to other farm animals, and will be the site of demonstrations by various “makers” or crafters, including quilters and felters.

Interior spaces are filled with exhibits and environments geared toward children of all ages, with the majority of spaces designed for children between ages 4 and 8. There will also be spaces, however, dedicated to toddlers and their parents, and older elementary- and middle-school-aged children will enjoy the learning spaces in Innovation Alley, which include the 3M Tinkering Hub, the Art Studio and Hershey’s Lab.

“When we look at the different exhibition and program spaces in the museum, I can see how kids with different interests and talents will get excited and engaged in each,” Dean said. “For example, in the Water Amazements exhibition, I can see the active, frenetic and exploratory nature of play and learning [happening] there. Inside our Cave, though, the nature of exploring is much more immersive and focused.”

Activities throughout the facility will incorporate the concepts of STEAM — science, technology, engineering, arts and math — to provide learning opportunities and to build confidence in creative thinking skills. Dana Engelbert, marketing manager for the museum, said the museum staff is looking forward to integrating northwest Arkansas’ growing community of creatives and innovators into its programming as well. 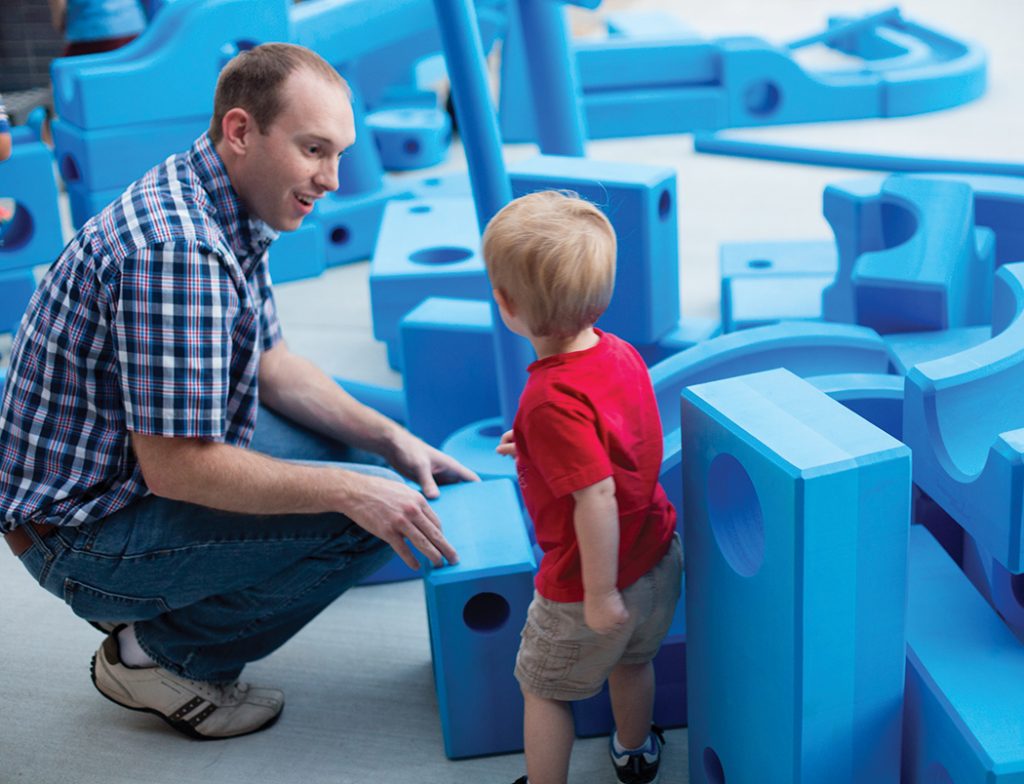 This activity was called the Imagination Playground. Children used large construction blocks, tubs and ramps to make structures based on their imaginations.

It’s all about creativity in the Tinkering Hub, she said. “Children will be encouraged to think less about the finished product — especially since very little will actually go home with guests — and more about the creative process. It’s about the hands-on, tactile work required to figure things out.”

In addition to permanent activities and environments, the Amazeum will also host temporary and traveling exhibits. The first installation was developed with a National Science Foundation grant, in collaboration with the Children’s Discovery Museum. Titled “Secrets of the Circles,” it is a tri-lingual exhibit that incorporates English, Spanish and Vietnamese languages.

“It’s very exciting,” Engelbert said. “This is a great opportunity for us to do some outreach into some of those communities that don’t always have opportunities [to visit science museums].”

In an area called The Market, visitors will learn more about where their food comes from. The Market learning environment is, perhaps not surprisingly, sponsored by Wal-Mart, but its support did not end with the writing of a check. When museum staff approached the company for assistance locating a truck for the planned exhibit, officials at the company asked if they could take on the project. Transportation team members sourced and prepared a truck cab, then cut openings in the cab and trailer and installed windows and doors to provide access and visibility. Wal-Mart employees were even seen polishing the truck after it was installed. 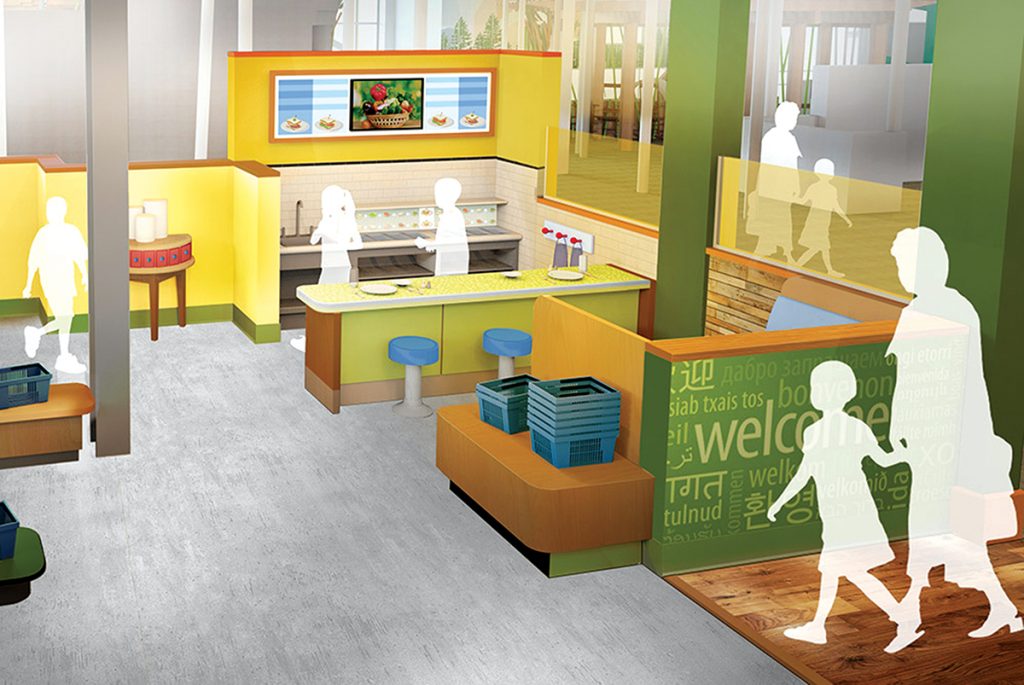 Artist’s rendering of the entrance to the Scott Family Amazeum café.

And thanks to a donation from The Miller McNeil Woodruff Foundation, The Market will be more accessible to children with physical disabilities. The foundation provided a gift to help fund installation of a wheelchair lift to allow children access to portions of the exhibit that are located on a raised platform.

The museum has also considered the needs of children with other challenges. While children’s museums are meant to stimulate, it can all be too much at times for some kids. A space called The Cloud Theater will provide children with stimulation-anxiety issues to take a quiet, protected break from activity. According to Engelbert, potential future plans include special days for children who have sensory processing and related difficulties.

Several rooms overlooking activity spaces on the main floor will be available for reservation for gatherings, productions and special events at the Amazeum. Outreach programs will also be offered for, and sometimes in, the community.

For more information about the Scott Family Amazeum, including details on membership, museum hours and location, and its current schedule and admission rates, log on to the museum’s website amazeum.org.