Not Running ‘Afowl’: Hopeful Hunters Look Ahead at Duck Season Amid a Pandemic 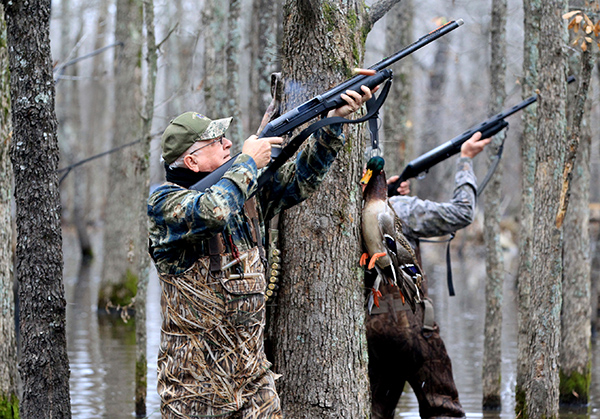 As waterfowl season approaches, migration patterns have hunters hopeful for a successful duck season in Arkansas. Due to travel restrictions in Canada, few American hunters were allowed to travel north and participate in the typical waterfowl season there. This inability to travel has left hunters eager to start their delayed seasons, and possibly means that fewer birds have been hunted so far this year. Now, as the birds travel down the Mississippi Flyway to Arkansas, hunters can expect an especially exciting season.

“People haven’t been able to go north of the border, so pressure’s not going to be on the birds,” says Jason Stewart, state chairman with Ducks Unlimited. “As long as the weather cooperates, I think we’re in for a pretty good season.”

Although the season appears to be promising, some business owners from around the state are anxiously waiting to see how the coronavirus pandemic will affect traveling hunters. Many officials, like Spencer Griffith with the Arkansas Game and Fish Commission (AGFC), hope that this year’s increased interest in outdoor activities will extend to duck season, which begins on November 21.

Many Arkansans, facing an endless quarantine, found that their only refuge in the outdoors this summer, and the AGFC noted a sharp increase in fishing license sales from previous years. In 2019, the Commission sold 313,037 fishing licenses to in-state residents. This year, the AGFC recorded 363,829 fishing licenses sold to Arkansans. That increase of more than 50,000 licenses is much larger than the general year-to-year variation prior to 2020. The AGFC has not seen the same astronomical increases in hunting licenses and duck stamps in 2020, but the numbers are still generally trending upward. Griffith expects the increase in fishing to indicate that people are prepared to embrace the outdoors during the coronavirus, and hunting should be no exception.

Although Arkansans might be ready and willing to hunt, nearly half of the AGFC’s annual duck stamp sales go to nonresident hunters. State-to-state travel is not restricted in the same way that Canada’s borders are closed to American hunters, but hunters might not be as comfortable traveling to Arkansas as they would in a typical year. Griffith and the Commission are hoping that the duck stamps continue to trend upward this year and that people recognize waterfowl hunting can be a safe outdoor activity while still following social distancing guidelines.

“Waterfowl hunting is a more social sport than, for example, deer hunting, which is more solitary. People can take the time to chat, drink some coffee and just have some camaraderie,” Griffith says. “This year, people may need to think more about taking personal precautions that might change what the season normally looks like.” 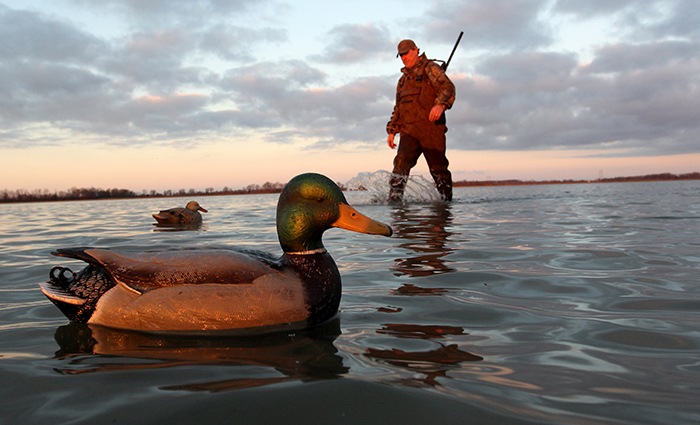 These precautions may not be dramatic, but they could alter what a typical duck season looks like for many hunters. Griffith’s suggestions include limiting how many people get in a boat and traveling to destinations in separate vehicles. Most safety precautions are realistic for both in-state and out-of-state hunters and will simply keep all parties safer during this unconventional year.

Other safety measures have already been planned by outfitters across the state. Waterfowl season is only 60 days long, and any kind of outbreak could be catastrophic to their operation; the recommended quarantine of 14 days, plus recovery time if someone contracts the disease, would take up a large percentage of the season. As a result, many outfitters, guides and camps are carefully planning their seasons to guarantee facilities are as safe as possible.

Duxmen Outfitters in Jonesboro generally leads about 800 hunts a year and manages 7,000 private acres of land for its hunts. Zach Fahlberg, owner of Duxmen, has been cautiously preparing for the season. The outfitter has limited overall capacity by scheduling two fewer groups a day throughout the entire season. The business has limited lodging to just three people per room, although Fahlberg notes that this will be a permanent change for guests’ comfort in the future. The Arkansas Department of Health has also visited Duxmen to make sure the facility has taken proper precautions, from installing plexiglass to providing hand sanitizer stations. Fahlberg, like Stewart with Ducks Unlimited, expects the season to be good due to the lack of travel to Canada this year, and his patrons appear to agree.

“Normally, we’re booking until the end of October, but we were booked solid in August,” Fahlberg says. “Demand for duck hunting has never been higher. We’ve had to turn down hundreds of hunts since August. ”

While the season may appear to be promising, many communities that traditionally receive an economic boost from traveling hunters face an uncertain fall and winter. Outfitters may be expecting lodgers as normal, but those travelers may be less likely to stop at businesses that are not necessary to their hunting — like restaurants or gift shops. Bethany Hildebrand, the executive director and CEO of the Stuttgart Chamber of Commerce, explains how she and other business owners are approaching duck season.

“We’ve spoken to some of the camps, and people are booking as normal,” she says. “People are taking precautions seriously and making accommodations, whether that’s adding duck blinds or limiting parties. As for the community impact, we’re not sure how many people will come into town and shop here, or stop in our restaurants. Obviously, the lack of tourism, in general, has been an economic blow to the community.”

Precautions taken due to the novel coronavirus have already dramatically changed the typical expectations for Stuttgart. The World’s Championship Duck Calling Contest and Wings Over the Prairie Festival, held annually in Stuttgart, was canceled due to the ongoing pandemic. The event generally draws thousands of people to the town during the week of Thanksgiving to celebrate the beginning of duck season and brings in millions of dollars of revenue to the community. The Great Duck Race, a 5k and 10k, will be held virtually, as well as a “quacktastic 41-mile challenge” to honor the Festival’s 41st anniversary. Although these online celebrations are not the same as the in-person events, Hildebrand hopes that hunters will still be able to stop by and support their businesses.

“We’re hoping that people will see duck hunting as a safe, outdoor activity where people can remain socially distant,” Hildebrand says. “We are anxiously waiting to see what will happen, though.”

READ MORE: The Art of the Duck