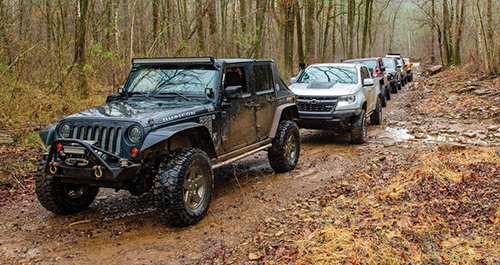 The call of the wild runs deep in Arkansas. Surrounded by such a bounty of diverse geographical features, it’s easy to only skim the surface of what our state has to offer. Going more inland and off the beaten path, overlanding is a growing style of camping that takes exploring the great outdoors to a spiritual level.

In print, overlanding is defined as “self-reliant adventure travel to remote destinations where the journey is the primary goal,” and to those who have done overlanding, it is this and so much more. The best way to understand what overlanding is: Pack up your car with camping gear and drive to one of Arkansas’ many parks.

Anyone can stumble into overlanding — just ask Grant Willbanks, an Arkansas YouTuber with a channel called “Arkansas Offroad.” From the Northwest region of Arkansas, Willbanks has always been a fan of the outdoors and camping, but exposure to overlanding shifted his mindset.

“I didn’t really know what overlanding was until about five years ago. I’m heavily involved with the mountain bike community, and the more I went to different public campgrounds, the more I saw people in the parking lot with decked out vehicles. I started looking at all their gear, and they had camping gear in and around their vehicles and bikes and everything,” Willbanks says. “So I kind of dug into [overlanding] and found a rooftop tent online, and thought, ‘You have a fort on top of your truck? How cool is that?’ And so in college, I built a vehicle and started adding camping stuff to it. I slowly started doing more and more harder trails, and it just felt much more rewarding than just going to a regular campground. The integration of off-roading and camping is super cool.”

Off-road vehicles are great means for traversing rugged terrain and Mother Earth’s more difficult features, but any car able to withstand some time off the pavement should be able to provide you with a taste of why people fall in love with the process. “You don’t have to have an expensive Mercedes Sprinter van to go camping. You can take whatever car you have, throw a few accessories and gear in it, and go,” Willbanks says. 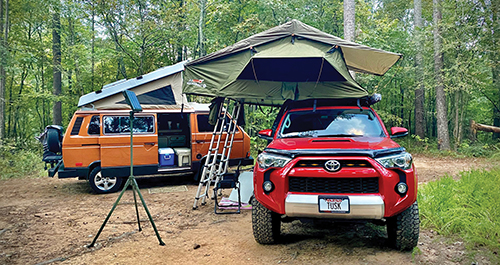 Not wanting to break the bank, people can be wary to try new things. Frankie Post, along with his brothers-in-law, Jordan and Wes Travis, opened Overland Rentals in Fort Smith this past year to help people interested in the activity to get their tires wet. Overland Rentals has camping gear, tents and even a selection of vehicles already decked out in gear for campers to take out on their own. Post has been overlanding for as long as he can remember, and the curiosity of Arkansans inspired this business venture.

During an 8,000-mile overlanding trip with his wife and kids, the Posts’ travel updates on social media highlighted a need back home. “So many people were like, ‘Hey, I would love to do that, but we could never afford it,’ or, ‘That would be amazing, but we could never do something like that.’

I thought there had to be a practical way to make all of this happen,” Post says. “And so I told my wife, ‘When we get home, I want to see what we can do about starting a business where people could cover the Ozarks and the Ouachitas,’ because the whole time we were on our trip we thought, ‘Yeah, this is all beautiful, but we have beauty right here in our backyard in Arkansas.’” Not long after returning from their trip, Post sat down with his brothers-in-law and created the idea for Overland Rentals LLC.

Traveling is still risky, but the outdoors has become a popular destination for those wanting to get out of their house amid the pandemic — and luckily for Arkansans, this state has sights to rival the more mainstream vacation spots. From the Ouachitas to the Ozarks, Devil’s Den to Petit Jean, Arkansas provides it all. Warm weather is right around the river bend, and with that comes the perfect opportunity to get your hands dirty — CDC permitted, of course. 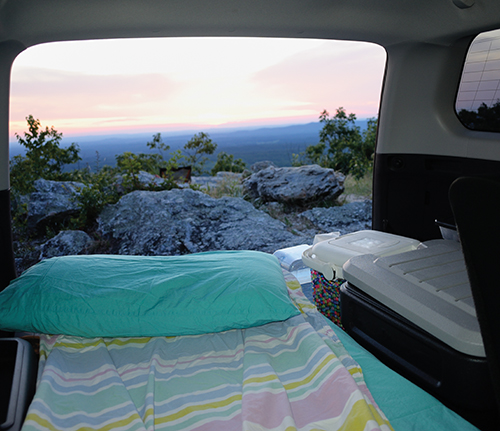 A popular attraction among seasoned overlanders, the Ozarks cover an expansive portion of the state with numerous trails to drive and places to sleep under the stars. However, a warning for first-time visitors to the Ozarks: frequent campers of the area have found that the terrain and trails can be difficult to navigate. Matt McClellan, an avid overlander and Arkansas YouTuber with a channel called “Ozark Overland Adventures,” has mapped out the perfect tour of the Ozarks for those wanting to explore something different in Arkansas while staying safe and following Motor Vehicle Use (MVU) map guidelines.

“Earlier last spring, a buddy and I were talking around a campfire about creating a five-day trip through the Ozarks and sharing it with the world,” McClellan says. “After a 10-day trip in Colorado, we came back and started designing this route called the Ozark Overland Adventure Trail (OOAT). We set out for five days videoing and documenting all the campsites we found, points of interest and scenic sights along the trail.” For easy access to the OOAT, McClellan has a video series on his channel with separate videos for different sections of the trail for those interested to decide which they would like to explore. For a black and white layout, links are in the descriptions of the video series to a PDF that can be downloaded and programmed into a GPS. 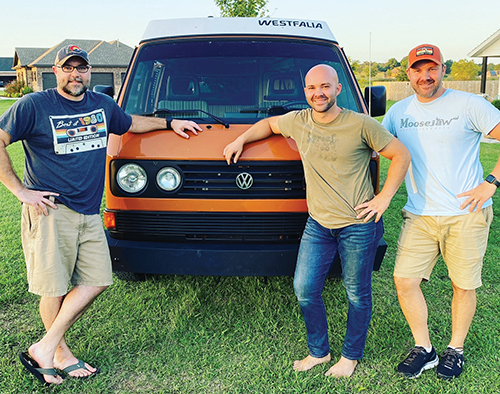 The ins and outs of overlanding can seem like a foreign language to some, but like with any new language, practice is key to learning.

“The trail really is customizable. If [campers] only have one night or one day, they can pick a section and turn it into a day trip. Or, they could combine three different sections and make a three-day trip out of it,” McClellan says. “This trail has been incredible and has really helped a lot of people gain access to the Ozarks when they otherwise may have been intimidated by [it].”

With so many notable features in Arkansas, ranking one too highly over another can be difficult, but the Ozarks come pretty close. Post recommends a few other trips to consider when planning an excursion for the family. “[You] can ultimately run forest roads from almost anywhere. From Devil’s Den, [you] can connect to the interstate and go to Mountainburg, and from there, [you] can take forest roads and trails all the way to Russellville,” Post says. “Tim Ernst’s Arkansas Waterfalls Guidebook has a lot of routes that take [you] to the waterfalls along with areas to camp as well.” 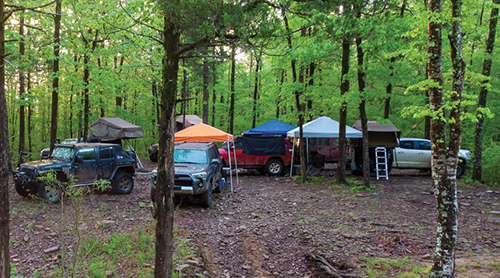 Trails upon trails upon trails can become overwhelming, but the overlanding community swears by an app that not only gives precise location but also logs routes and trails that other overlanders have taken. “A big mapping software we recommend is Gaia GPS,” Post says. “It’s a $40 a year subscription, but it has all of the routes and maps that I’m talking about. [Gaia] also records you as you go so you’re able to run those routes and other people’s routes that have uploaded their own.”

Willbanks recommends Gaia to keep your travels legal. The MVU maps are regulated trails that have been deemed accessible to the public in order to maintain wildlife upkeep and protect certain areas of parks. “A lot of people don’t realize these trails can be super hard to navigate. Some trails might look like they’re legal, just because they look well-traversed, but they’re not,” Willbanks explains. “A lot of vendors use Gaia, and there’s a map layer on [Gaia] called MVU map, so anything that shows up on that is a perfectly legal route.”

The ins and outs of overlanding can seem like a foreign language to some, but like with any new language, practice is key to learning. The fluent speakers in overlanding have given some words of wisdom on how to start. 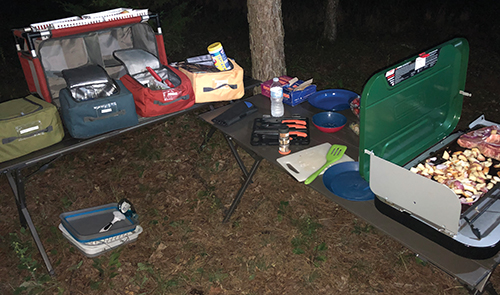 “Just keep it simple,” McClellan says. “One thing about the overland community is we tend to be major gear junkies. There are a lot of gear options available that are tailored and promoted to the overland community, and some of [it] is super handy to have, but some of it can get silly. So I tell people starting out: just keep it simple. You know you need a place to sleep, and obviously a vehicle, and if all you have is a two-wheel-drive pick-up truck, an old tent and a Coleman camp stove, take that.”

Even though his business has all the gear any camper could dream of, Post wholeheartedly agrees. “I’ve got a friend who’s driving a Dodge Challenger, and he’s pulling a little trailer behind it with a dirt bike hooked up. He’ll take that, set up his ground tent, camp and then he’ll jump on his old dirt bike and explore,” Post says. “That’s really what it’s all about, just getting out, exploring and meeting people.”

The overlanding community is a close-knit one. People meet each other as strangers on a trail and end the night sharing life stories around a campfire. Arkansas has plenty of explorers and places to be explored for you to find your campfire, so load up the dogs, kids or neighbor down the street and get some mud on your tires.