On June 13, 1977 girl scouts Michelle Guse, Lori Lee Farmer and Denise Milner were brutally raped and murdered at Camp Scott in Locust Grove, Oklahoma. This unsolved case has become one of Oklahoma’s most infamous murder mysteries.

(originally published in AY Magazine in May 2008)

Though it didn’t begin officially for another 10 days, the summer of 1977 was shaping up to be another hot one for Oklahoma. Sunday, June 12 offered hope for relief, as storm clouds appeared on the horizon. The prospect of rain certainly didn’t dampen the spirits of a group of Girl Scouts gathered outside their troop headquarters in Tulsa. Members of the Magic Empire Council were preparing to leave for summer camp, a trip that many had been planning for several months. Doris Denise Milner,10, had worked hard to sell enough cookies to attend camp for the first time. Her playmates had decided not to go that year, so she was a little anxious, but still excited about making new friends.

After last minute goodbyes to family members, the 140 scouts stepped aboard buses that smelled of oil and leather. Lurching and rattling, the caravan moved out and headed for the small farming community of Locust Grove, about 50 miles away in northeastern Oklahoma, where the Girl Scout Council owned a 410-acre tract of land known as Camp Scott. Since 1928, Camp Scott had provided adventures for young girls in a variety of recreational and educational activities; hiking, swimming, arts and crafts, cookouts and sing-alongs. A lot of memories can be made in two weeks.

On the outskirts of Locust Grove, the buses turned south at the intersection of OK Hwy 33 and OK Hwy 82. A green sign directed the drivers down a narrow road called Cookie Trail and onto the Girl Scout property. The camp was divided into units that were named for American Indian tribes: Osage, Chickasaw, Creek, Seminole, Choctaw, Comanche, Cherokee, Quapaw, Arapahoe, and the most remote, the Kiowa Unit. Twenty-seven girls were assigned to Kiowa, which was at the western end of the campgrounds, and the last tent in the unit was Number 8, a twelve-by-fourteen foot canvas tent that sat on a wooden platform 100 yards away from the nearest counselor’s tent and 75 feet away from the closest neighboring tent. Denise Milner was assigned to Tent 8, along with 9-year-old Michelle Guse and Lori Lee Farmer, who would celebrate her ninth birthday later in the week. A fourth girl was to join them the next day.

A thunderstorm hit around 6 p.m., as the scouts were eating in the mess hall. After supper, they waited for the rain to slacken, but it continued as the long day drew to a close, so everyone retired to their respective quarters. Denise, Lori, and Michelle unpacked their belongings in Tent 8 and prepared for bed, as they got to know each other better.

Denise said she enjoyed watching television and playing with her 5-year-old sister, Kathleen. Lori was big sister to four siblings. Michelle was from Broken Bow, but she quickly became friends with Denise and Lori who were both from Tulsa.

Lori unpacked a couple of decks of cards and sometime before lights out, she wrote a letter to her family. “I’ve met two new friends,” she wrote. “I’m sharing a tent with them. We’re sleeping on cots. I couldn’t wait to write. Love, Lori.”

The letter was Lori’s last communication with the world. Within hours, she was dead, as were Denise and Michelle, all victims in one of Oklahoma’s most infamous murder mysteries. A nightmare without end for three families, the case remains open and has had more twists and turns than a game of Labyrinth. It is still one of the most hotly debated topics in the history of Oklahoma jurisprudence.

About 1:30 a.m., June 13, Carla Sue Wilhite, a camp counselor, took a flashlight and went to investigate suspicious, intermittent moaning sounds that seemed to be coming from somewhere near the intersection of a camp trail and a dirt road that led to the parking area. It was approximately 150 yards from Tent 8. When Wilhite could not find the source of the noise, she decided it was just an animal in the dense woods nearby and nothing to arouse concern, so she returned to her tent and went to sleep.

At 2 a.m., one of the Girl Scouts in Tent 7 saw someone pull the tent flap back and shine a light inside. She couldn’t discern the features of the person; she just saw the silhouette of a large individual. The flap closed again, and the unidentified person went away.

At 3 a.m., a girl in the Cherokee Unit heard a scream coming from the direction of the Kiowa group. A girl in the Quapaw Unit also heard someone cry out, “Mama! Mama!” and thought she recognized the voice as that of Lori Farmer, with whom she had attended camp once before. She knew that Lori sometimes had nightmares, so she dismissed any cause for alarm and went back to sleep.

The bad weather moved out overnight, and Monday dawned bright and clear. It was the kind of morning when nostrils flare, and every breath taken is a deep, fulfilling sigh. The woods were fragrant and fresh. The earth smelled clean. It was going to be a beautiful day.

At 6 a.m., Wilhite woke and went to take a shower. As she approached the area where the strange sounds had been heard during the night, Wilhite saw three sleeping bags lying beneath a tree: one yellow plaid, one green and the third had a floral design. On closer inspection, Wilhite was horrified to see, partially covered by the yellow plaid bag, the lifeless body of Denise Milner. The little girl was nude from the waist down, and her hands were duct-taped behind her back. Stuffed inside the other two bags were the bodies of Michelle Guse and Lori Farmer. Autopsies would later show that Michelle and Lori had been beaten to death and Denise, though her face was battered, had actually died from strangulation. All three girls had been sexually assaulted.

Camp counselors responded quickly, but nothing in the Girl Scout manual ever prepared them for anything like this. They accounted for all the other girls attending camp and herded them into the mess hall for breakfast. Trying to shield them from certain trauma, the counselors improvised a scene of normalcy. Within minutes, the first law officers arrived on the scene, cordoned off the murder site, and kept the news media at bay, while evidence was collected. It wasn’t long, though, before word got out about the tragic event. Reverberations radiated outward, and by nightfall, the entire nation’s attention was riveted on the tiny town of Locust Grove, Oklahoma. 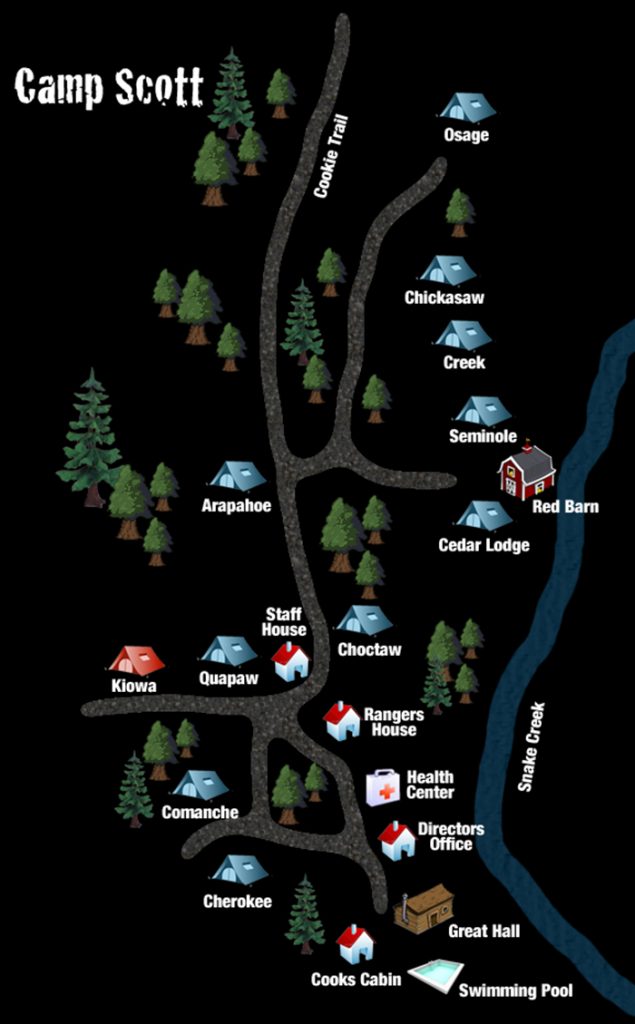 A layout of Camp Scott. Michelle Guse, Lori Lee Farmer and Denise Milner were assigned to the Kiowa Unit. (Imaged used with permission from www.abandonedok.com)

Check back next week for …