Little Rock Artists Invite the Public In During “Open Studios” 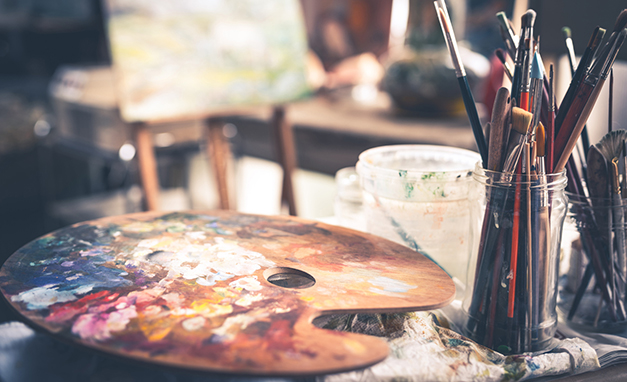 Studios are places of experimentation and creation, where artists can go to practice and hone their craft and produce the work that they will then carry out into the world to be seen by patrons, critics, museum visitors and more. It’s a private space by design that is rarely seen by outsiders. To some, an artist’s studio is a sacred place.

Noted scholar Joseph Campbell definitely agreed with this idea, calling the studio a place of “creative incubation,” where something special happens even when it seems that nothing is happening.

“To have a sacred place is an absolute necessity for anybody today. You must have a room or a certain hour of the day or so, where you do not know who your friends are, you don’t know what you owe anybody or what they owe you,” Campbell said. “This is a place where you can simply experience and bring forth what you are and what you might be.”

This Saturday, Little Rock artists are giving the local community a chance to peek behind the curtain of their art-making process and into their studios.

Not merely a showcase for the artists, it is a celebration of the variety and range of artists operating in Little Rock. Arts + Culture Commission chair Allyson Gattin says Open Studios will give people a greater insight into who is making art and where they are located throughout the city.

“Little Rock and Central Arkansas have such a range of art and artists, and that’s what we’re trying to get across,” she says. “It’s not just one little pocket of downtown, it’s not just in the Heights or Hillcrest area. You have people all the way down on Highway 10. There‘s creative work happening in all corners of Little Rock.”

Since its founding three years ago, Open Studios has grown significantly, Gattin says. The first Open Studios featured approximately 30 artists, in comparison to 61 (so far) this year. In addition, there will be 14 creatives spaces, including alternative spaces that will be open this year. Two cultural institutions, Ballet Arkansas and Historic Arkansas Museum, will also be participating in Open Studios.

While Open Studios has been steadily adding to its roster of artists, there have been artists who return for the event every year. “We have artists who keep coming back to us,” she says.

One of the biggest changes for Open Studios is becoming a part of ACANSA Arts Festival, a visual and performing arts festival that aims to build community in Central Arkansas. “It’s the first year that we’re going to be part of Acansa, and we’re excited to be providing an opportunity to interact with the art and artists,” Gattin says.

For Gattin, the Open Studios gives the general public a greater insight into how artists incorporate art into their daily lives and how they make these beautiful works. By having the event in their own spaces, rather than only museum or gallery spaces, it provides a more intimate look at the artists’ lives and processes. “This is an exclusive opportunity for the public to see where artists are creating the finished pieces we see displayed in homes and galleries across the city. From solo studios and co-op spaces to in-home studios and more, Open Studios will put on display the many spaces and creatives to which our city is home,” she says.

Open Studios will be held Saturday, Sept. 14, from 10 a.m. to 4 p.m. at locations across the city. Check out the map below to see where to go.

There will also be a kick-off party for the ACANSA Arts Festival on Friday, Sept. 13, at 5:30 p.m., at the Butler Center in downtown Little Rock. Artists participating in Open Studios will be present to discuss their work and more. 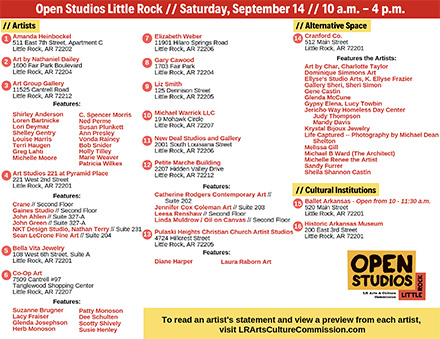 For art lovers and the art curious, this is an event that should not be missed.