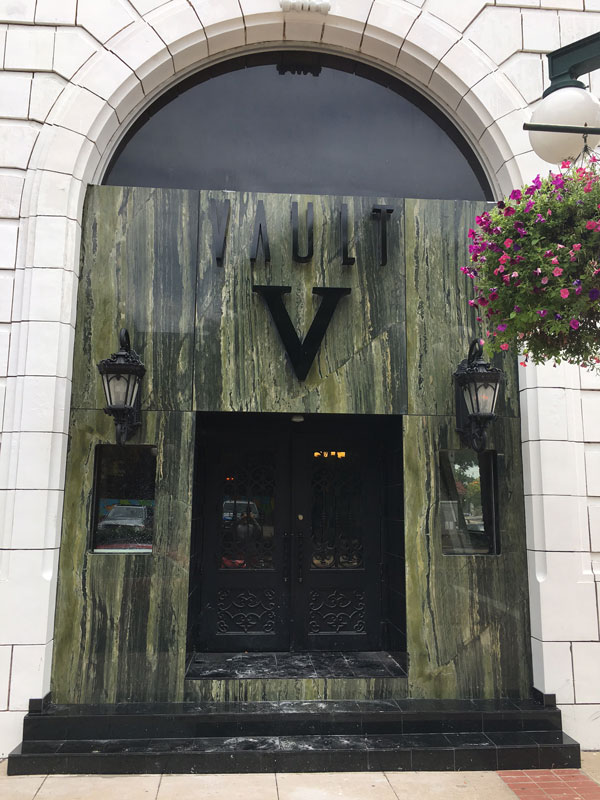 [dropcap]T[/dropcap]he stone building nestled in a corner of downtown Hot Springs’ Central Avenue is fairly unassuming. With its gray archways and wrought iron door there’s not a lot to make its traditional facade stand out. Unknown to many outside the Hot Springs area, the building constructed in 1909 was home to First Federal Bank and then Citizens Bank. Thanks to a local team of visionaries, the Vault on its way to becoming the new hot restaurant in Hot Springs. 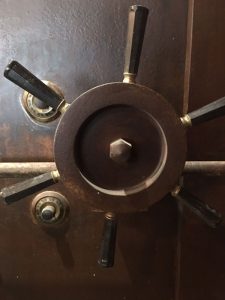 The old bank vault inside the restaurant has been converted into a private dining area.

Co-owners Jason Taylor and Dr. Daron Praetzel knew they wanted something unique, but quintessentially Hot Springs. 723 Central is one of the few buildings in Arkansas that features “Tiffany brick.” “It has a baked-on finish – it’s a shiny style of brick,” says Taylor. The official restaurant area of the building will be located on the lower level (basement area) and first floor. The lower level is a large prep kitchen for the main kitchen and restaurant, which is housed on the first floor. The heart of the restaurant will be the bank vault.

“The building is home to one of the oldest bank vaults in Arkansas,” according to Dr. Praetzel.

It’s believed by many locals that this particular bank vault is “the one Al Capone kept his money in,” says Taylor.
After bringing on General Manager Randy Womack, formerly of Central Park Fusion, the three knew they had to make the bank vault the centerpiece of the restaurant and a special place for private dining. This was no easy feat considering the original space was only about 9 feet by 9 feet and most of the walls in the entire building are multiple feet thick.

“We had to knock a massive hole out of the side of it and open it up,” says Womack. “We didn’t want people to feel claustrophobic, and we needed a clear door there, so guests can see into the hall.”

“Now it’s got this beautiful opening in the side of the bank vault,” says Womack. Next, they hired local artist Patrick Cunningham to create a mural for the ceiling. “He’s magnificent,” says Womack, who also commissioned Cunningham to do some smaller pieces for the restaurant’s interior. 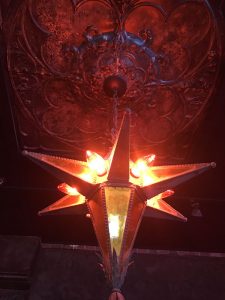 The Vault team has worked hard to maintain the original integrity of the architecture while adding modern touches.

“We will also be featuring some pieces by artist Lisa Wilson, who used to have a gallery here in town with her husband called Art Gone Wild,” says Womack. “she’s now internationally collected, and has a gallery in Key West, and is going to be sharing some of her larger works that she commissioned specifically for me.”

Chef Mike Easley signed on as culinary lead in April. Easley has been well-known around Little Rock restaurants for years. “He was at Cache, Maddie’s Place and 1620,” says Womack. While the official menu is still a work in progress, Womack said he’s elated to be working with Easley. “One minute we’re talking about liquid nitrogen, smoking drinks, popcorn and brittle and the next we’re discussing sous vide,” he says.

While not yet ready to give away menu items, when pressed Womack hinted that there will be some table-side cooking, melted chocolate and “possibly a little flambe.”

Other notable features of the dining area are a wine room, a VIP wine room, and an outdoor dining area featuring a built-in bench that is finished in black granite tile.

The trio has worked hard to keep elements of the original bank. They kept the exposed brick walls and have had several of the fixtures refinished for repurposing. The impeccable attention to detail will be seen throughout the restaurant. “From everything down to the salt and pepper shakers,” says Dr. Praetzel.

“We want to enhance the downtown for everybody and set a standard that’s competitive with the rest of the country,” he says.

“For 40 years this building has sat empty with people trying to revive it,” says Taylor. “Now it’s finally going to happen.”

Construction is expected to be completed soon and the group hopes the restaurant will open this fall.

By Melanie Kramer and Maggie McNeary