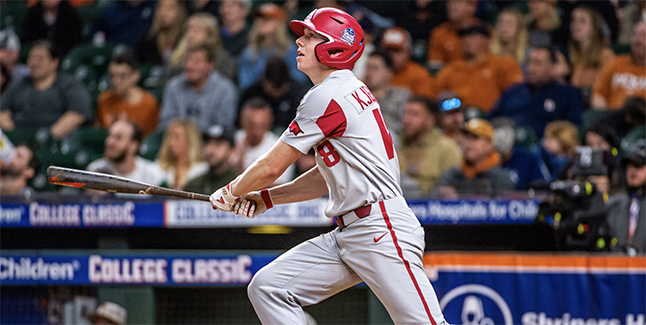 University of Arkansas baseball standout Heston Kjerstad is heading to the big leagues.

Kjerstad was taken as the second-overall pick by the Baltimore Orioles in the Major League Baseball (MLB) draft on Wednesday, June 10.

The Amarillo, Texas-native joined Coach Dave Van Horn’s Razorbacks in 2018, playing in the outfield. In played and started 69 games in his freshman year and was named the SEC Freshman of the Year. In addition, he was named to the All-SEC Second Team and the SEC All-Freshman Team.

As a sophomore, he had a .327 batting average with 87 hits and 17 home runs. In the shortened 2020 season, he was the SEC leader in hits, total bases, and slugging percentage.

“I think the thing we like about him the most, other than the bat and his makeup, other than who he is and where he comes from, is the fact that his power is really foul-pole to foul-pole — all fields, all types of pitches. He’s a monster and we’re really excited to develop him in our system and get him in the middle of our lineup one day,” Elias said.