Out of Africa: Letitia deGraft Okyere Shares Her Father’s Incredible Story in ‘The First Vice President’ 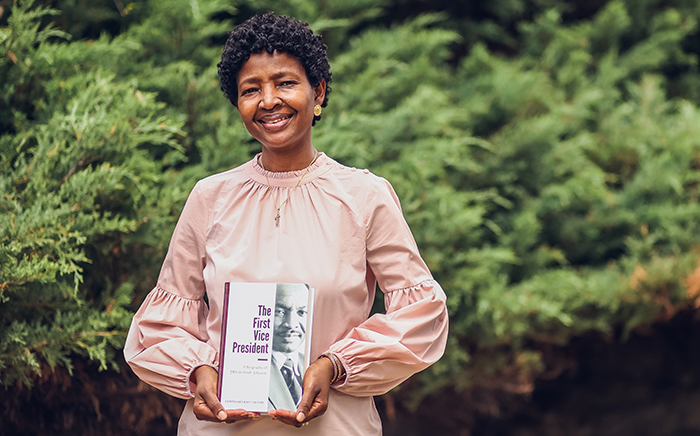 Throughout history, revolution has always been a many-splendored thing. Leaders in the word and deed of political upheaval are often enshrined in the annals of history, studied in high schools and universities and copied by legions of devotees long after their own passing. Behind them, in every large-scale turnover of power or philosophy, there are hundreds if not thousands who labored in their shadow.

Thus did legions of Claire Lacombes bleed out every ounce of Napoleon Bonaparte’s influence and the likes of Felix Dzerzhinsky did revolution’s dirty work to give Vladimir Lenin his yeast for change. Many died for their efforts, getting a glimpse or less of the new order they sought to bring about, as with Crispus Attucks, who fell so that a new nation might rise. But all possessed a faith in that vision for which seemingly no sacrifice was too steep, no price too high. It’s an at-all-costs obsession Letitia deGraft Okyere knows well.

“I was born in Ghana, on the western coast of Africa. My father worked for a research company, so we lived on the university campus,” says deGraft Okyere, who now lives in Little Rock. “Around maybe my 11th birthday, my father went into politics. He stood as a vice presidential candidate and his party won.

“Even though I was young, I kind of understood the implications of what he was trying to do. When we moved to [the nation’s capital] Accra, my father explained to us that this is a difficult job. I remember the moment he moved in there at the official residence; he gathered us all together and told us, ‘Look, we have work to do. The country is in a mess.’”

Political change on the African continent, with notable exceptions, has had more than its share of ruthless coups and blood-soaked civil wars that granted power to the brutal and despotic. Those installed democratically, and who sought to lead their nations toward modernization and personal freedoms, were often swept aside and ultimately lost in the shuffle of history.

JWS de Graft-Johnson is one such man, a patriot and scholar who devoted his life to the betterment of his native country and greater opportunity for his fellow citizens. In so doing, he forfeited a life of relative comfort to step into a dangerous arena where he’d face brutality, imprisonment and, ultimately, exile. Yet chances are you’ve never heard of him.

“I’ve always felt that his side of the story has not been told,” his daughter says. “His side, as in his government, what he was trying to achieve, has never been told.”

In The First Vice President, the 2022 book deGraft Okyere penned on her father’s life and career, the opening pages provide a sobering account of what it meant to be in the hands of political enemies in the 1970s and 1980s. She details in his own words his arrival at a detention facility following a coup and the hours-long intake interrogation by soldiers, punctuated by a physical beating.

Told in unflinching detail, deGraft Okyere considers such chapters as essential as they are hard to write.

“When he reported, he was given a massive beating. He was abused,” she says. “That was the part that was extremely difficult for me. It really made me sick. The prison experience; well, just imagine prison in a third-world country. His life was difficult.” 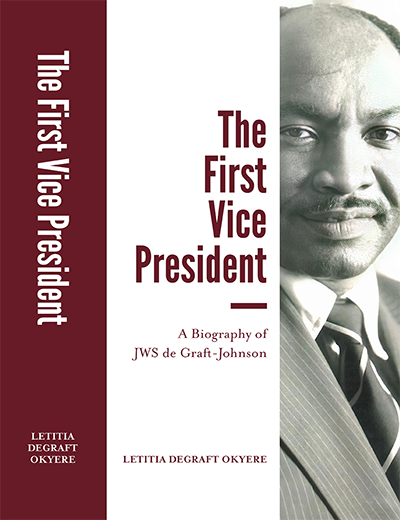 A man of lesser principles might have avoided such atrocities by simply keeping his head down and his mouth shut. An engineer educated in the United Kingdom and U.S., de Graft-Johnson began his career in London, but was determined to return to his homeland to help modernize the country. A respected lecturer at Kwame Nkrumah University of Science and Technology at Kumasi, he was promoted to director of the Buildings and Roads Research Institute in 1969.

By 1974, he was one of 10 members appointed to the Ghana Highways Authority and also one of the founding members of the Ghana Institution of Engineers. His reputation attracted the attention of government leaders in Zambia, where he advised the set-up of the Building Research and Development Institute in Lusaka.

His family grew along with his reputation. He and his wife, Lily, welcomed five children, all of whom enjoyed a comfortable existence during his teaching years.

“He had an amazing sense of humor. He was able to see the light side of every situation,” deGraft Okyere says. “He always felt that he should be able to make fun of himself. It keeps you grounded. And he was someone who used events to teach us a lesson, teach in the moment. He could be totally about something funny that happened and then immediately he would switch and say, ‘But you know, I learned such and such from this experience.’”

The description defies the image of a storm-the-castle radical, and for good reason. De Graft-Johnson believed the hidden power of his nation was in its natural resources and wanted to change the way those resources were used to improve the standards of living inside the country and to better leverage them to bring Ghana into the modern age. As deGraft Okyere says, he saw politics as the only way to bring his grand reforms into reality, even though pushing for change and criticizing the status quo leadership through his various professional associations brought backlash from the ruling military government.

“The idea was that with his technical background, he could move implementation top-down, as opposed to from the bottom up as a researcher,” she says. “As a researcher, he’d come up with an idea, then have to go to the ministries and convince the leaders that this is good for the nation. As a national leader, he thought he could move it from the top down with greater impact.”

His political influence and activism accelerated, serving in the 1978 Constituent Assembly to write the 1979 Constitution of the Third Republic and joining in 1979 the brand-new People’s National Party (PNP). The people embraced the opportunity for reform, electing PNP candidates to national office, including Hilla Limann and de Graft-Johnson as the first president and vice president in Ghanaian history.

But in this volatile part of the world, the distance between national hero and marked man was often razor-thin, a fact not lost on his teenage daughter.

“So we had a military government that was getting ready to hand over to democracy, right?” deGraft Okyere says. “Now, just before the handing over, there was another military coup and that was a very violent coup. I mean, that was a coup that we hadn’t quite seen, where they took leaders and took them to the firing squad and shot them. So, for me, the thing that stuck in my head was, ‘If this thing happens and doesn’t work out, Daddy is going to die.’ 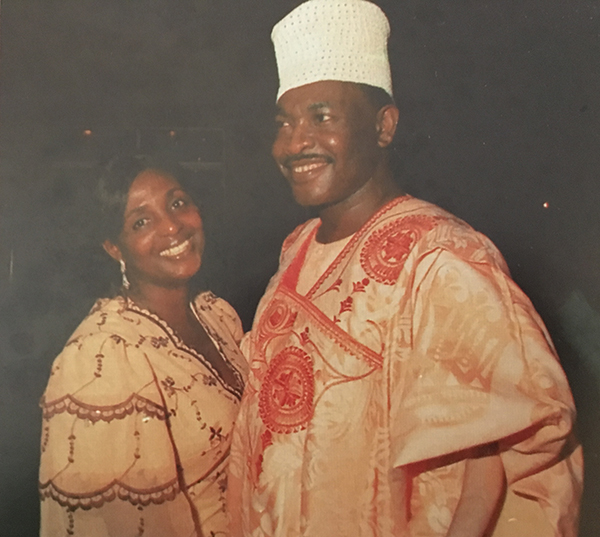 “Then, after he took office, there were a series of coups that the government had to put down. As a child, I knew that if things didn’t work out, I could end up like those other children whose father had been taken to a firing squad. I also knew what it was like when the soldiers started getting agitated and they’re trying to create a coup and we had to leave the house. I recall evacuations in the middle of the night where my mother would come and wake us up and say, ‘We have to leave the house.’ I mean, she never told me why, but she didn’t have to. I knew what it was.”

On New Year’s Eve 1981, the family’s fears came to fruition as the military overthrew Limann’s government, jailing many within his administration. During de Graft-Johnson’s imprisonment, the family survived as best they could, living with relatives or occupying ramshackle housing. Following his release, de Graft-Johnson continued to be harassed until he applied for a visa to attend a professional conference in London, an offer the government originally declined.

“The military regime refused to give him a passport, but eventually they did,” deGraft Okyere says. “When they gave it to him, he left and decided to stay out, and we moved to the U.K., as exiles.”

Life as a political refugee made for a difficult adjustment. In addition to missing their homeland and extended family, deGraft Okyere and her younger brother had trouble fitting in at school.

“We came in the middle of a school year. That’s always more chaotic,” she says. “My older siblings were college-age so that was OK, but myself and the young one, he was in between primary school and I was in between high school. I remember my younger brother coming home one day crying because someone had made fun of him. Similarly, in my case, it was difficult for the first two years until I finished [high school].

“But I had very interesting parents. They were the kind where, ‘This is the way things have turned out, so we are going to make the most of the situation. We don’t like being here, we don’t want to be here, this is not home, but this is where we find ourselves.’”

De Graft-Johnson would remain a vocal critic of Ghana’s political structure and human rights violations from abroad, but he wouldn’t come home to stay in his native land again until he became one with it following his death in 1999 at age 65. At about that time, deGraft Okyere came to America, where she’d often visit her sister in Arkansas. She moved here herself about 17 years ago, and today works for the state health department, far away from the threat of assassination and furtive escapes into the night. Yet these elements which made up so much of her father’s life, and hers, refused to fade from her memory.

“When the military coup came in, they had to justify the existence, so they went out to destroy the legacy of this democratic government,” she says. “I had to get the record straight. I had been toying with it for years, and then sometime in 2016 I decided to just go ahead and start working on this.”

Painstaking research is evident throughout The First Vice President, which reads less like a child’s tribute to her father and more like the historical biography that it is. Enough time had passed that deGraft Okyere was allowed to travel freely to and within her native Ghana, which she’s done regularly in recent years. Through these visits and multiple telephone calls, she found many people willing to share their memories of her father as statesman, as engineer and as a Ghanaian. 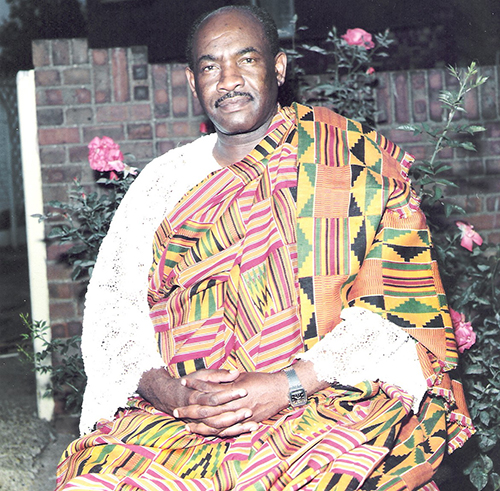 The impressive work, nearly 500 pages long, published in 2022 as an engaging tribute to a man willing to pay any price for the good of a nation.

“When we moved to Accra, he expected us to behave in a certain way as he and his colleagues were working to fix the country,” deGraft Okyere says. “We, as a family, had to work together to make sure that whatever it is they’re trying to achieve gets done.

“Once we came to England, he couldn’t go back to where he was because of the political taint on him, but he remained involved in the fight for the return to democracy. He didn’t remain quiet in exile; he was very apt to draw attention to the human rights abuses and degradation of the country.

“He used to travel all over the world bringing attention to the issue of mistreatment, so he was always persona non grata [in Ghana]. But the contribution that he made, his dedication to his country and his sacrifice were remarkable. He literally sacrificed his life, his professional life, for his country.”