Out of the Flames: Glen Johnson Found Life in Arkansas 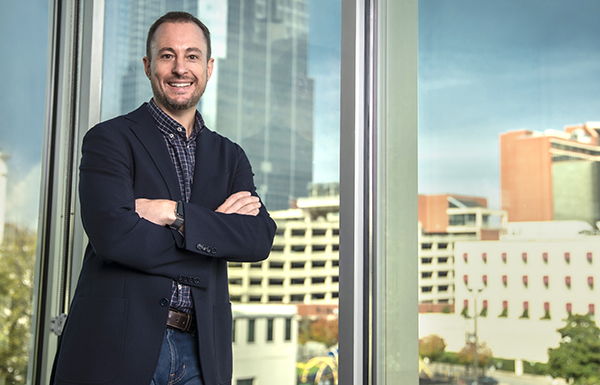 Out of the Flames: Glen Johnson Found Life in Arkansas

It would be easy to say that Glen Johnson has “made it.” His version of the American Dream plays out every day before his contented eyes. He’s a business leader of what those without his air of humility would call an empire; he’s found eternal matrimony with his wife, Kirstin, with whom he’s been blessed with three children. For the four of them, his love is unwavering, boundless — earned, in the strongest possible meaning of the word. Because, for Johnson, life wasn’t always filled with such harmony.

The road to his becoming president of Blue Flame Minerals and co-CEO of Dyne Hospitality (the largest Tropical Smoothie franchise in the country) ultimately led him to Arkansas, but his journey actually began in Clearwater, Fla. His upbringing was within a family with construction and real estate ties, often going into the office to help his Realtor mother during his early teens. After a brief stint at the University of South Florida, Johnson dropped out and followed his roots into real estate himself.

But his success in such a prosperous market was hampered by his own devices, a cloud that had begun to follow his every move — addiction.

Growing up, Johnson was without much of a male role model to admire in a useful way, in what he describes as a “single-mom household.” His brother is 16 years his senior, so, for the most part, Johnson’s home life consisted mainly of him, his younger sister and his mother. Johnson’s father was mostly out of the picture, as struggles with substance use stood between him and his family.

“My dad’s an addict and has been for pretty much my whole life,” Johnson recalls. “I struggled with the same thing, with addiction.”

It started in high school as nothing more than a seed — a dabbling here and there like many teens, not near the dependence that would come later and turn into the biggest obstacle Johnson has ever faced.

In the background, he was still working in real estate, but merely making ends meet as the primary controller of his life became drugs — specifically, his most inhibiting crutch: Oxycodone.

Today, Oxycodone and other pain-relieving narcotics have become a centralized part of the growing conversations surrounding drug addiction in the United States. But 20-25 years ago, when Johnson first became a substance abuser, most of the conversations that encompass the present day were yet to be had. It was 1996 when Purdue Pharma first introduced the drug OxyContin, misleading the general public with a marketing campaign that minimized its addictiveness. Sales quickly grew from $45 million that first year to more than $1 billion in 2000. By 2004, OxyContin was one of the most widely misused drugs in the country.

Purdue Pharma would eventually plead guilty for its deceitful sales strategies in 2007, paying more than $600 million worth of fines. But this apparent justice came much too late for the millions of Americans who had become addicted to its product and its cousins that behave similarly. People like Johnson.

His slippery slope ran downhill from almost day one. This many years later, he has a hard time pinpointing all of the specific details, but he does recall having been prescribed a “Percocet-like” pain medication for a minor injury first, the stem of his eventual narcotic strife. 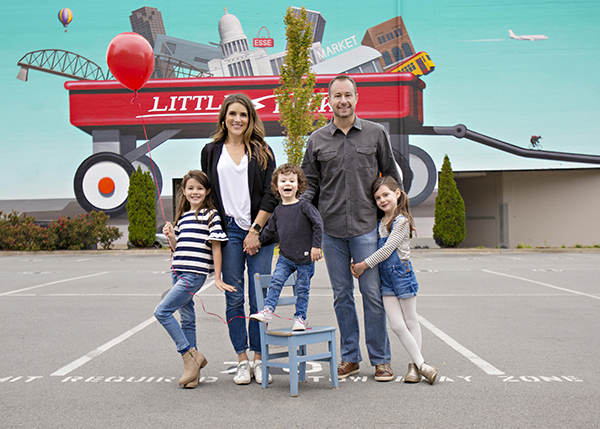 “It was always this constant battle of the addiction taking over and driving my day, versus the work that I needed or wanted to do,” he says. “I would say I more ‘survived and got by.’”

But there came a point when even survival was on the brink. Altogether, Johnson overdosed five times during his darkest days, at the reaping steps of death’s door each time — emergency rooms, stomach pumps, the whole gamut. After every close call except the last, he returned to the very cycle that had put him near demise. Until the fifth time, which helped him back onto the path of life.

“When I was 23, I would describe it as God used this last [time] I overdosed to plant a seed in my head that said, ‘You need to change,’” he says. “It was my rock bottom.”

Being honest with who he now saw in the mirror, Johnson sought solace in his mother. She scoured the United States for a place to help rehabilitate her boy — somewhere that was “faith-based,” at his request. As fate (or divinity) would have it, Johnson found himself at Capstone Treatment Center in Judsonia, just outside of Searcy, after Christmas in 2004. This was home for the next three months of his life, each of which he notched “clean,” as he has for every month since.

With this newfound sobriety came another monumental decision. Technically, his arrival in Arkansas was thought to be little more than a pitstop. After completing his rehabilitation, he originally intended to return to Florida — the only place he’d ever known — where he had a network of friends and family waiting. But the Sunshine State was also where Johnson had left the cloud that had plagued him for so long. The some 1,000 miles between Clearwater and Searcy was a reprieve, a good distance between him and that ominous fog.

All of this he took into careful account. He reflected on who he was and who he had become in just a few months. He confided in the good people he had met at Capstone whom he began to literally trust with his life. Finally, he decided to stay and practically start over from scratch. The chapter documenting his old life was finished, and he had work to do in writing the rest of his story.

“Fortunately, I found some really amazing, great people locally who became good friends with me and supported me,” he says.

His first month as a sober man was spent in a Searcy hotel; he had no job, no connections and no true place to call home. So, he got back to basics. He found some roommates — friends he had made at Capstone — enrolled at Harding University for one semester and began to plug into his new environment.

That would be the only semester he’d study at Harding, because, ironically, fate found him again. Just as he was on the front end of the burgeoning opioid crisis in America, he was now in Searcy in the mid-2000s, the very start of another boom: natural gas. It was 2004, the same year Johnson first stepped foot in Arkansas, when Southwestern Energy first established the Fayetteville Shale play. Soon, companies from all over the United States and the world would be flocking to the state like ducks in November, settling their crews in places like Conway and, of course, Searcy.

Johnson was right in the middle of it, poised with the prowess of his past life in real estate.

“What was really interesting to me is, growing up in Florida, I had always been taught not to buy land without a way to pay for it, because that’s how you can get in trouble,” he says. But in the Natural State, acres can lead to much more value than simply feet and yards; beneath the surface, an almost-literal gold mine might await.

Johnson began finding land and brokering mineral rights for investors looking to get in on the Fayetteville Shale, Southwestern Energy at one point included among his many clients. He has worked these fertile soils ever since, later officially founding Blue Flame Minerals, of which he is the president.

“That’s kind of [still] what Blue Flame does,” he says. “We raise money from investors, and then we go and purchase mineral rights, either in the Fayetteville Shale play or other shale plays around the country, and we manage those investments.”

The fruits of these labors began to bud prosperous outputs for the entrepreneur, until the Great Recession beclouded most of the worldwide markets.

“That was a real eye-opener for me,” he says. “Because I had worked really hard at that point in time to figure out mineral rights and natural gas and all that, and that business kind of vanished overnight. It came back within a year [and] was decent, but I really wanted to get into another business.”

Two important factors were at the forefront of his post-market-crash mind: He knew that he wanted to help people, and he desired an endeavor that could withstand another recession down the line. After studying what had worked, and didn’t, during the 2007-2009 era, he found that many restaurants were able to make do better than other trades, specifically the fast-casual food scene.

In 2011, Johnson opened his first Tropical Smoothie Cafe in North Little Rock, an enterprise that blossomed into Dyne Hospitality Group in 2017, which is the largest Tropical Smoothie franchisee in the country with 70 locations. For his many and ongoing successes, Johnson was recognized on Arkansas Business’ 40 Under 40 list in 2019. According to the publication, Dyne Hospitality has been named Developer of the Year twice since its official inception three years ago. Both Dyne and Blue Flame continue to operate out of Little Rock under Johnson’s helm.

Despite the accolades and accomplishments, however, there’s no competition to the proudest harvest of his life: his family. One finds it hard to miss the distinct change of octave in his inflection any time he talks about them. It was nine years ago in August that he married Kirstin Johnson (formerly Swindler), again at the hands of fate. Or, in this case, a mutual friend that introduced the Searcy transplant to the Little Rock native. Together, they have three children — daughters Amelia and Afton, and a son, Finn, the youngest of the bunch. The Johnson family lived in Searcy for a spell but officially moved to Little Rock together six years ago.

If you introduced Johnson to his 20-years-younger self today, he might not recognize the man he’s become. One who, despite it all, speaks only humbly of himself and places at paramount the team at his employ; who aims to be decent and kind, philanthropically giving through both physical assets and simple goodwill; and who credits all of his blessings as such, given by the hand of his Creator to all those who seek Him.

“I can remember when I was an addict thinking I would never have a family, coming from a broken home,” he says. “That’s where my mind was at. So now, I can’t believe how blessed and fortunate I am, really. I’ve got a wife that I love who is just an amazing person, and then we’ve got our three kids … They’re my life.”

To the many Arkansans facing similar struggles who are trying to find the way back to the right path, Johnson imparts gracious words of wisdom.

“You never know what you’re going to be dealt,” he says. “You just have to react to it and be positive and work hard and get through it. Never give up, because even in your darkest days, there’s always a way out.

“I always try to say a thankful prayer every day. I thank God for delivering me from my addiction and for the life that I have today.”