Every week, there’s a wealth of great musical performances throughout Little Rock. From dive bars to swanky restaurants, music lovers can find some of the best musicians the Natural State – and the country – has to offer.

But one of the shining jewels of this music scene is the Oxford American’s concert series at South on Main.

The Little Rock-based magazine recently announced its upcoming 2019-2020 season, which will be themed around “Old Friends/New Friends,” and it’s an impressive showcase of returning and new musicians.

This season will be divided into three separate “series,” which will consist of four concerts per series. The three series will be based on genre: Americana, Archetypes & Troubadours, and Jazz.

A number of the musical artists next season will alter your perception of what music can be. The Archetypes & Troubadours series will highlight musicians who “bend and blend musical genres” to create a unique musical experience. This series starts on September 26 with Rev. Sekou. Catherine Russell and John Fullbright will follow on December 5 and March 12, respectively. Ranky Tanky will be the series closer on April 16.

This season, jazz artists will be entertaining Arkansas audiences and giving back to local students. In addition to performing, the jazz artists will be conducting free masterclasses at the University of Central Arkansas. Peter Martin & Romero Lubambo featuring Erin Bode will kick off the jazz series on September 5. Jaosn Marsalis Vibes Quartet will continue the series on November 14, Fred Hersch Trio will pick up the series in 2019 on January 30, and the Miguel Zenon Quartet will close out the jazz series and the overall concert series on April 23.

Starting May 13, new subscribers can purchase four-show packages. The packages will be available starting at noon on metrotix.com or by calling (800) 293-5949.

Individual tickets will be available starting Monday, May 20 at noon.

Concerts start at 8 p.m. at South on Main in Little Rock. Doors open at 6 p.m.

Check out the schedule of events: 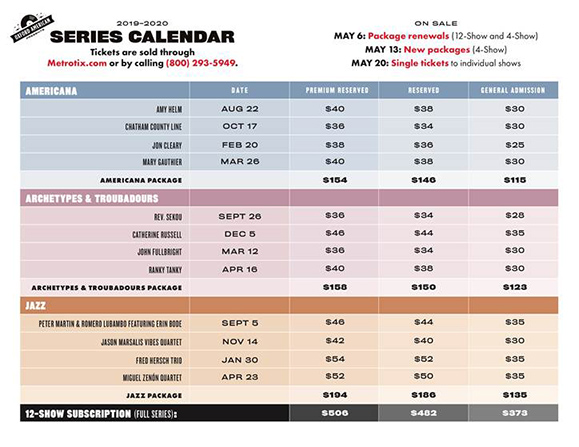