Apples have always been more popular than pears. I’ve often wondered if Eve had eaten a pear instead of an apple would that still be the case?

[dropcap]Though[/dropcap] the poor pear may not be associated with Christendom, like apples, they can be baked in tarts, preserved in jars, or paired with cheese and eaten raw. And this time of year, pears can and should take center stage. For this to happen, it all starts with the tree.

I love to grow pears espalier style, an old-school method where the tree is planted near a wall or structure and the limbs are trained to grow alongside a frame, rather than straight up into the air. For our forefathers, this growing method meant fruit could be picked without a ladder, and the trees would take up less space.

Even though I have access to ladders and room to grow, I simply enjoy the challenge and the process. My go-to espalier design is the candelabra, where the branches grow out and then up to look like a row of candles. My Jewish friends call it a “pear menorah.”

Espalier trees planted in this way can form a natural wall, barrier or backdrop in your garden. However, espalier can be tricky. More than once, Mother Nature, or one of her stubborn offspring, will have other plans. I keep a few of my failed espaliers — killed by a rampant case of fire blight — as a reminder that she holds the final wild card.

Anyone who has bitten into a gritty Bosc, expecting the sweetness of an Anjou, will tell you not all pears are created equal. They vary in sweetness, flavor and juiciness, so the variety you choose for your recipe is important. Here’s a quick primer:

Green Anjou – One of the sweetest, most prevalent pears. It’s an all-purpose fruit that’s juicy, mellow and delightful raw but also great for baking and roasting. In season: September to May

Red Anjou – Like the Green Anjou and just as sweet and with a hint of spice replacing the citrus. Opt for this one when you want to add some color to your plate. In season: October to May

Bartlett – Typically used for canning, and generally not eaten raw. This variety has lots of juice, so it’s best for purees or baking. In season: September to February

Red Bartlett – Like green Bartlett but a little sweeter, so it’s eaten raw more often, but also great for preserves. In season: August to January

Bosc – Tall and brownish with firm flesh, which is best for baking and poaching, and perfect for tarts. In season: September to April

Concorde – Another all-purpose pear, crisper and sweeter than the Anjou, but still good when raw. Great for baking but because it doesn’t brown as quickly once you cut it, it’s ideal for garnish. In season: September to February

Comice – Another juicy and sweet pear with silky flesh and a mellow flavor. Best raw. In season: September to March

Forelle – You will know this pear by its speckled skin, which resembles a trout. It has a firm, crisp flavor much like a green apple. In season: October to March

Starkrimson – Tell-tale red coloring holds a soft and juicy variety with a floral, almost perfume-y flavor, which mellows out when baked. Use to add unexpected color to tarts and other pear desserts. In season: August to January 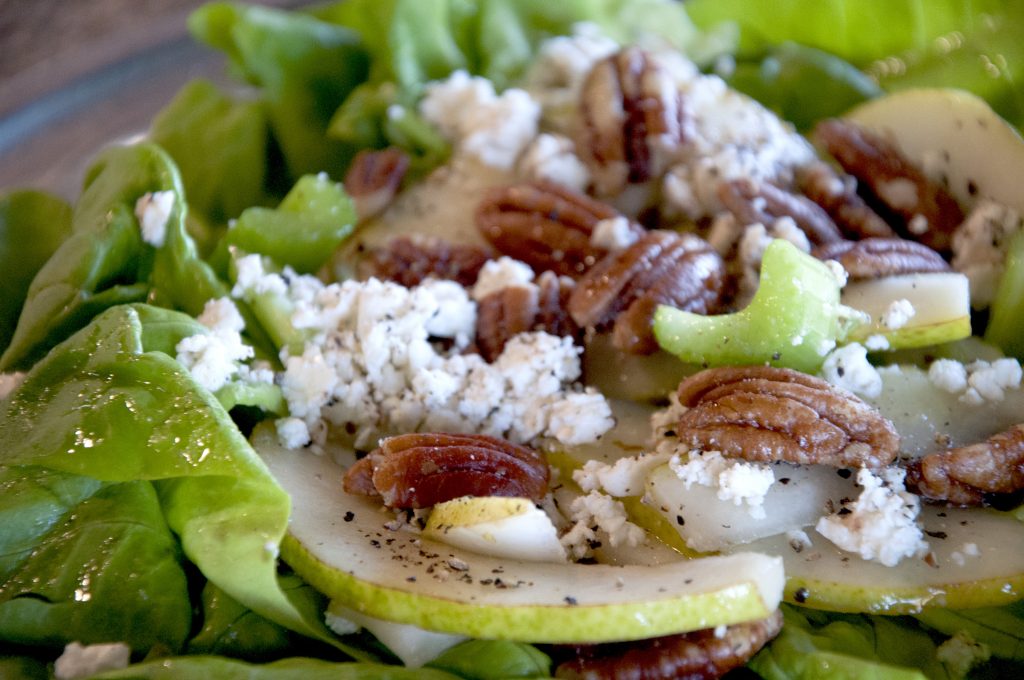 [dropcap]My[/dropcap] favorite variety to grow are Kieffer pears, mainly because they’re the only ones I’m very good at growing. They’re a lesser-known variety that was developed in the 1830s in Pennsylvania. Today, they’re an old staple on Southern homesteads. Four generations of my family have grown these trees, and they feel like home to me. (When I was younger, the hard, unripe fruit doubled as ammunition.) This tree is tough in the Southern heat and can live up to 50 years, and the blooms are very beautiful. My mother and my aunts would finely shred Kieffers for pear honey, and used them in preserves and pies, but I’m sharing a light spinach, pear and cranberry salad recipe for you to try.

To make the dressing, combine half a cup of olive oil, 2 tablespoons of balsamic vinegar, 2 teaspoons of whole grain mustard, and 1 teaspoon each of sugar and kosher salt in a mason jar. Then throw in just a little pepper. Secure the lid on the jar and shake vigorously until blended well. Then set aside 2 tablespoons.

Put the 2 tablespoons of dressing in a bowl and toss with the dried cranberries. Set aside. This will soften them up, so they’re not so chewy.

The cup of sliced red onions sitting in cold water will crisp the slices and take away the raw onion taste.

Grab a large bowl, toss in 8 cups of fresh spinach, your sliced onions and 2 thinly sliced pears. Give the remaining dressing in the jar one last shake and pour it over the salad. Scatter in the cranberries and toss so the dressing fully coats the spinach. Then serve it immediately! Makes about 4 servings.