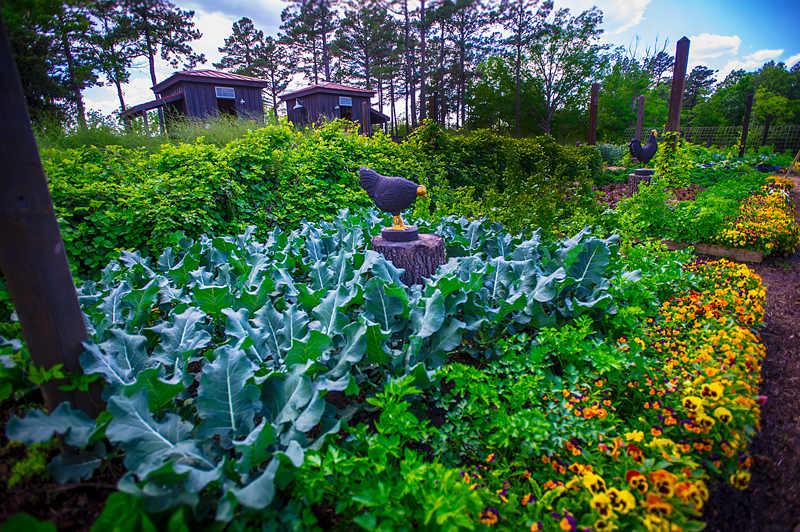 On this particular fall day at Moss Mountain Farm, over 50 guests are touring the vegetable garden. They admire the fern-like asparagus foliage that serves as a border. They walk in wonder through an archway dripping with dipper gourds. Baby green tomatoes and bright red peppers are still aplenty. A bevy of butterflies, attracted to the flowers that grow in the garden, charm the visitors.

They are there as part of a lunch tour to draw inspiration from P. Allen Smith’s Moss Mountain Farm. He opened the farm in 2010 to serve as a place of education and inspiration for living sustainably. “It’s in a constant state of improvement,” says Smith.

“I’m most proud of the message we’re getting out and how we’ve helped people live healthier lives,” Smith says. “I was teaching about organic gardening 17 years ago on PBS before ‘going organic’ was cool. I was out meeting with local farmers and producers and promoting the farm-to-table concept before it was a buzzword. It’s something I’ve always believe in and I’m fortunate to be able to share with others this lifestyle that I think is healthy and important.”

Everything is grown organically, and produce from the garden is used in meals served at Moss Mountain as often as possible. Greens, in particular, are available from the vegetable garden almost year-round. You’ll taste them in the Niçoise salad served during the lunch tour. 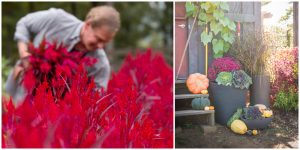 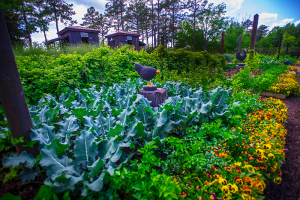 The vegetable garden contains a mix of edible and ornamental plants to encourage pollinators to visit. It’s made up of a series of raised beds, serving as a scalable model to show visitors how they can garden like Smith in their own backyards.

“From a philosophical standpoint, the vegetable garden represents the importance of diversity on all levels,” Smith says. “It’s the most ecologically vibrant part of the farm except for the native meadows. You’ll often find me pulling over on my drive in and out of the farm to collect some seeds from the wildflowers that grow there to scatter throughout other parts of the farm.”

Moss Mountain Farm also is the centerpiece of Smith’s production work. His two shows, P. Allen Smith’s Garden Home, entering its 17th season on PBS, and the syndicated Garden Style, in its 18th season, are often filmed at Moss Mountain. Through his shows, he teaches viewers creative ways to blur the lines between gardening and the dining experience.

But Moss Mountain is more than a beautiful backdrop. As much as it is a place of inspiration, more importantly, it’s a place of conservation. Smith focuses on growing native plants, both edible and ornamental. He partners to test new seeds there before they go on the market. At Moss Mountain Farm, he perpetuates antique roses and preserves the genes of heritage poultry.

Smith founded the Heritage Poultry Conservancy in 2009, dedicated to the support and preservation of all threatened breeds of domestic poultry. More than 60 breeds live in Poultryville – chickens, ducks, geese and guinea fowl. Some, like the White-Faced Black Spanish, seem to approach the fences in greeting when visitors are around, much like curious dogs might. 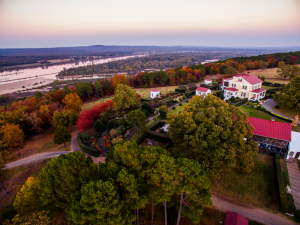 Smith’s passion for chickens stems from his childhood, when he showed chickens and other animals for competition. For Smith, protecting the genetics of heritage birds isn’t just about passion. It’s practical. “With the rise of factory farming, a lot of people stopped raising chickens in their backyards. Because of that, these breeds became endangered and we are at risk of losing out on their genetics, which are critical. If something were to happen, if disease were to spread among industrial chicken houses, we are going to need [them].”

Smith hosts poultry workshops twice a year at Moss Mountain Farm for poultry enthusiasts of all levels. During the event, presenters cover topics from breeding and raising heritage chicken breeds to humane poultry processing and, of course, Smith provides anecdotes illustrating his long-standing love for chickens.

His affection for all the animals at Moss Mountain is evidenced by his naming of them, like Amos the Buff Orpington, Moose the donkey, Twinkle the sheep, Trudy the horse and Squeak and Smudge, the sister Anatolian shepherds whose job it is to protect the Moss Mountain animals. 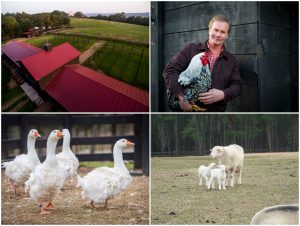 Smith feels lucky to have a platform to share his mission of helping others.

“Not many people get that opportunity and I recognize that. You have to be yourself and be authentic. From the beginning, the mission has always been the same — to help people make healthy choices and live sustainably. No matter what opportunities come along, staying true to that purpose has kept me grounded. I also get up very early in the morning,” says Smith, known to wake up by 5 a.m., when he’s in town, to feed the chickens and tend to his farm.

Moss Mountain covers almost 600 acres along the banks of the Arkansas River, laced with multiple garden “rooms” planted with annuals, herbs, perennials, roses, shrubs and ornamental grasses. Hedges are strategically placed around the property to create mystery and build up suspense, so that when a visitor peeks around they may delight in the surprise that awaits.

An award-winning garden designer, Smith takes surprise very seriously. “It’s an important element of design,” he says. “To know everything or to see everything revealed at once eliminates our opportunity to be delighted by discovery.”

The hedges behind the vegetable garden, for instance, conceal the view of a sloped gravel path lined with holly bushes. Huge wrought iron gates at the bottom of the path open into the rose garden, arranged in a large oval with two square outbuildings with low gothic arches and crenulated tops reminiscent of tiny castles and a larger octagonal one in the same style in the center. 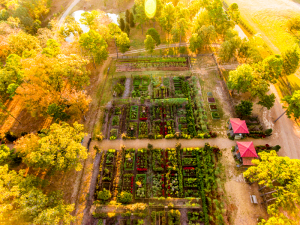 The rose garden was inspired by Lady Elizabeth Ashbrook’s Arley Hall in Cheshire, England. Lady Ashbrook became a friend of Smith’s while he did graduate work in England, and she shared with him her love of antique rose varieties, many of which are planted in the Moss Mountain Farm rose garden. Smith is particularly fond of Noisettes, the first class of American roses. You’ll see these, such as ‘Champneys’ Pink Cluster’ and ‘Lamarque,’ at the farm.

One of Smith’s favorite quotes is by English poet Alexander Pope. “Consult the genius of the place in all.” For Smith, that means understanding the spirit of a place and working with the land and its inherent properties. As you walk through the property, you’ll see native plants from wildflowers and fruit trees to shrubs and grasses. And you won’t be able to resist standing in awe at the 350-year-old Big Sister Oak, around which Smith designed the entire property.

“I love the serenity and tranquility of the place,” says Smith. “Looking out on the majestic views of the Arkansas River Valley from the back porch gives me a sense of calm and perspective. I equally love Moss Mountain Farm when it’s animated with people using it and enjoying it. That’s when the spaces come to life. It’s important for me to share the place.” 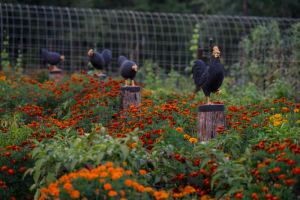