Paris is Always a Good Idea 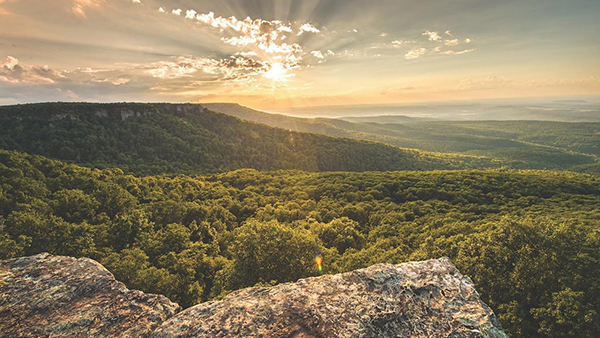 Well, we certainly got ourselves back in the swing of post-quarantine activities in the best way I could have imagined. Last month, the Baker clan loaded up the Jeep, turned the radio up (singing, “Bye, Corona” to the tune of My Sharona) and put coronavirus in the rearview mirror, at least for a little while. We took a quick little weekend trip to Paris, and we didn’t even have to get on a plane to do so.

If Paris, France, is known as the “City of Light,” then Paris, Ark., is surely wine country. It’s the pride of Logan County and was just what the doctor ordered for this gal after a stressful couple of months. 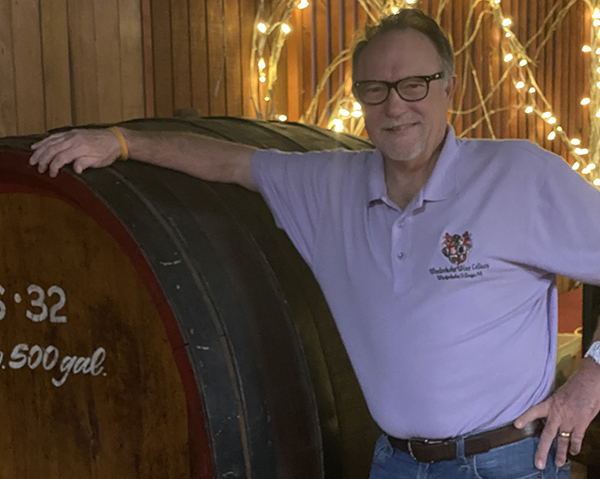 But before we landed in Paris, we took a little, how you say, le voyage a few miles further north to Wiederkehr Village where the 140-year-old Wiederkehr Wine Cellar is located (we’re on a wine tour, remember?). This first stop was like stepping into another country. 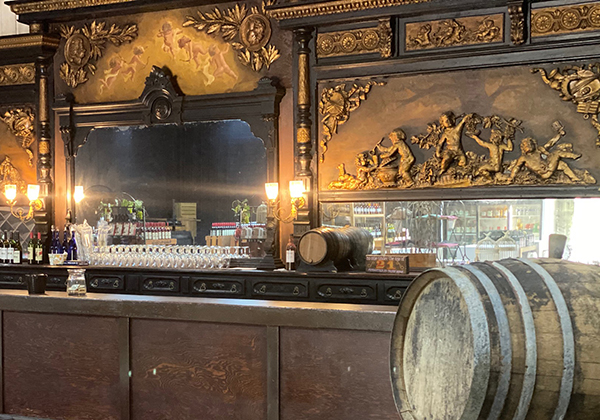 The Wiederkehr family’s proud winemaking heritage goes back generations, further even than the state of Arkansas. The styles of Switzerland, where the family name traces back to, are evident in every part of the experience, from the Swiss alpine slopes model of the vineyard to the fabulous lederhosen the employees wear. 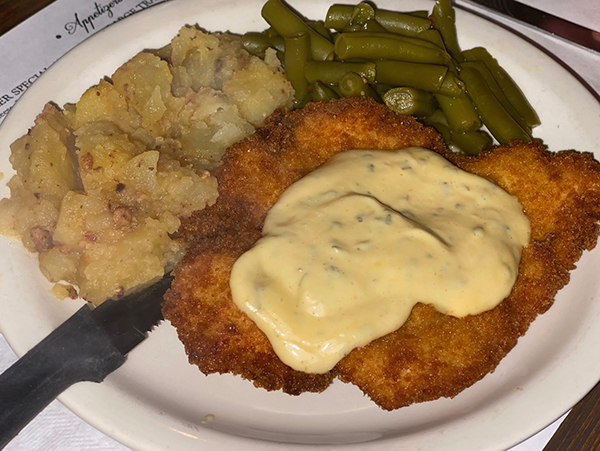 But you can’t talk the talk — or in this case, snap the straps — without also walking the walk. And Wiederkehr delivers in more ways than just its delicious wine. Its Weinkeller Restaurant serves up a number of delectables, like cheese fondue with a “secret” blend of Swiss cheeses; Back Hendel Vienna, a chicken breast rolled in a mixture of bread crumbs and herbs then fried; Poulet Rôti au Vin Blanc, a roast chicken and an old family recipe; and even the chicken fettuccine alfredo, an Italian Swiss classic. Whatever you do, no matter how tempting, don’t get too full from your entree. The dessert menu features a decadent assortment of treats, including Swiss caramel custard, coupe chalet, Grandma Wiederkehr’s strawberry shortcake and Swiss apple strudel, which was to die for.

After our taste buds were satisfied with food, they were prepared for the sweet vintages that this family has been squeezing out for more than a century. A stroll through the gift shop and a seat at the bar later, we were being served glasses of fermented grapes like a royal family (my husband and I, anyway; soda only for the kiddos). Even then, the essence of this leg of our journey remained the same as when we first laid eyes on the place: history. We learned about the history of muscadine wine, in particular, as well as the story behind the different types of wine in general. But history class has always made this girl thirsty, and our newfound friends at Wiederkehr delivered.

We then journeyed a few minutes down the road and set up shop on our next stop of the tour, or should I say posted up. It’s Post Familie Vineyards, another grape-filled staple of Arkansas. And Post has a rich tradition of its own. 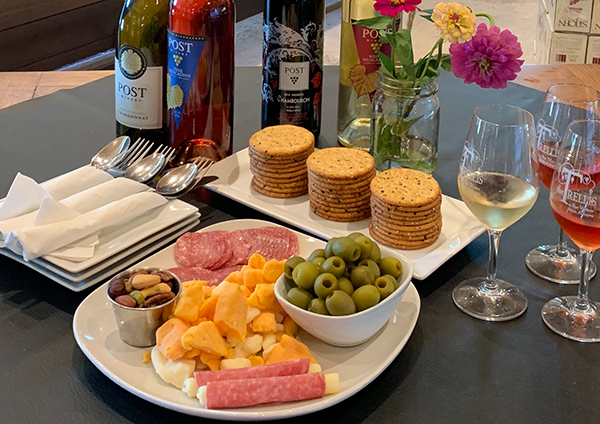 Since 1880, the Post family has been cultivating bottles of wine like no other. In fact, the Posts boast themselves as the largest winery in the state and the first to produce a commercial vineyard. Today, the family’s fifth-generation carries on the distinct legacy.

Did I say distinct? I meant to say delicious. So good, that my brawny groom with a palette usually reserved for whiskey caught himself slurping the piquant pleasures of Post with more enthusiasm than any of us expected.

While sipping, we were able to go behind the scenes to see how the state’s mightiest Kaiser of the industry does it every day. Cauldrons that seemed stories tall filled the processing room, the largest vats of anything I had ever seen. 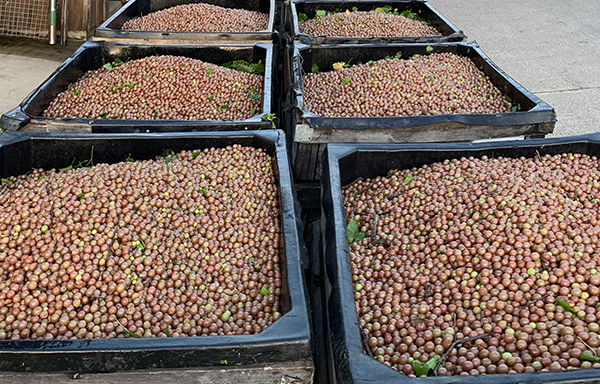 What really hammered home the passion and dedication that Post embodies is the farm-to-table methods of its on-site eatery. All of the vegetables and herbs used in the dishes served are grown right there, not unlike the grapes that fill its bottles. We were able to peruse the garden, as any visitor can, and it was one of the coolest elements of our trip.

At long last, we were ready for Paris. There, the Cowie Wine Cellars and Vineyards provided us an experience unlike any other. 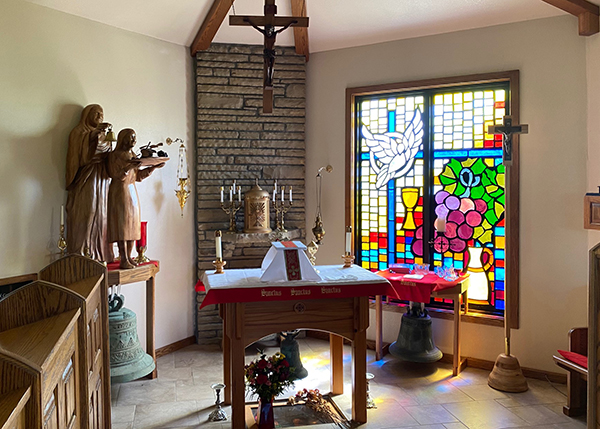 Like its neighbors in Arkansas’ wine country, Cowie has found its own essence, a unique flavor that makes it more than just a winery. 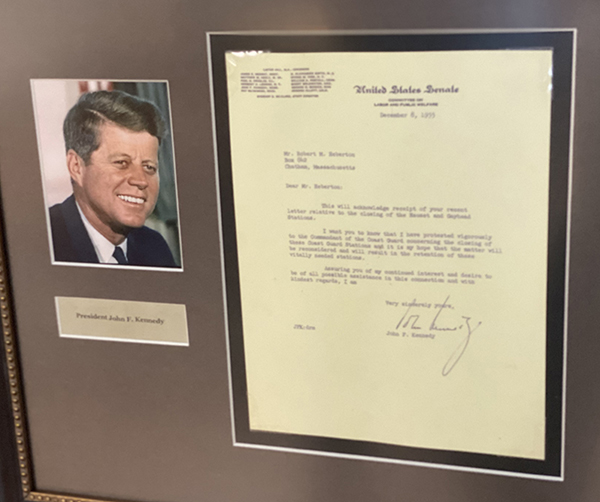 Sure, it has plenty of the divine nectar — varieties running from full-bodied to dry dinner to sweet sippers; an arsenal of awards — from its first in New York in 1982 to its blueberry wine being offered to the official wine taster for Queen Elizabeth II in 1997. But it also has its fair share of non-wine divinity. 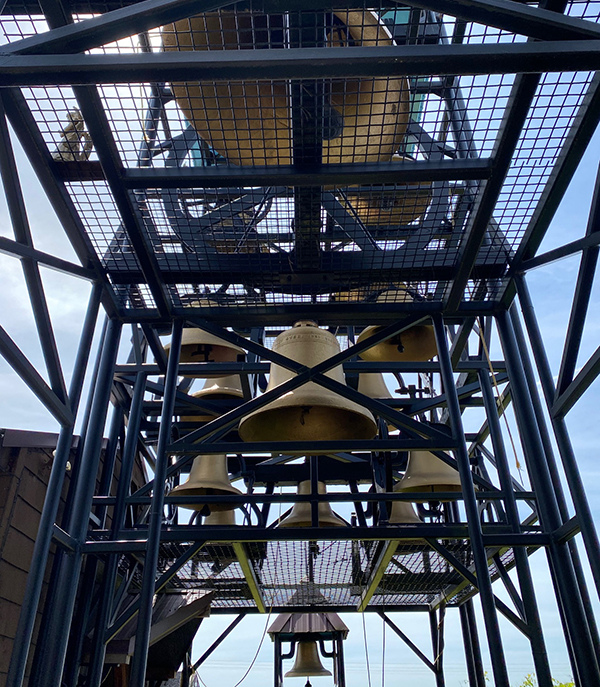 The entire location is littered with bells — more than 80 of them by my count; bells as grand as a cathedral’s, whose chimes seem to carry on for miles and miles across the Arkansas River Valley.

We imbibed a few meads and swigged a few sweets before being pulled to Cowie’s finest — a historic wine museum filled with historic treasures. Ghosts of wine’s past filled the rooms, from old barrels to fermenting fossils like an ancient wine press and relic bottling equipment.

Deeper we dove into Cowie’s surprises, for the museum was not just home to venerable vineyard lore. The walls were filled with memorabilia from decades and centuries past, like letters, signatures and pictures from nearly every U.S. president, prominent astronauts and more. 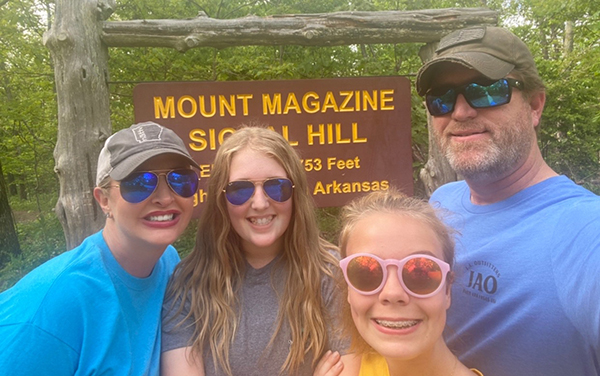 Baker and her clan on Signal Hill.

Alas, the clock struck twelve and the Bakers were on the move again. To the dismay of my tastebuds, we put our four wheels in drive toward our final stop on this weekend adventure (though not without a few souvenirs and brown paper bags), the Eiffel Tower of Arkansas’ Paris: Mount Magazine State Park.

This probably best sums up the perfection of this mini-vacation. To be able to take a wine tour spanning only a few country miles, and end up in a beautiful cabin atop a towering mountaintop is something they write books about. To be able to do all of that in Arkansas is priceless. 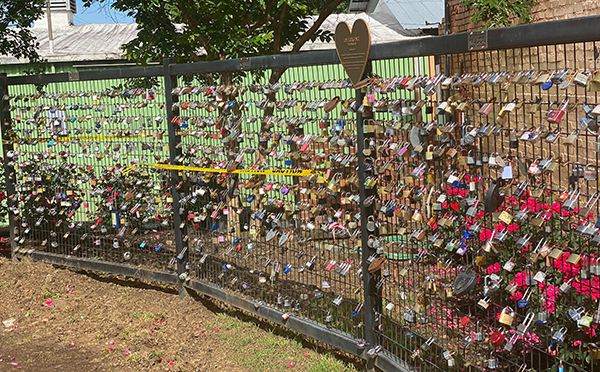 Locks of Love in Paris.

We spiraled up the altitudinous landscape on our way to our room and board for the weekend, heads literally in the clouds before we knew it. Our family called cabin No. 1 home during our time on top of the world, but the park also offers a lodge with dozens of rooms, and there are campsites scattered throughout.

All the bells and whistles (though not the bells from Cowie) were featured in our cabin: two bedrooms, two bathrooms, a fireplace, a deck with a hot tub and a full kitchen. Such luxuries made me immediately wish that we had an entire week blocked off to enjoy all the offerings, but (as the people who know me can attest), it’s work, work, work always for this city girl, and a weekend was all we could swing this time around.

That night, we were all tapped out on dining in, exhausted from a full day’s labors of wine tasting, so we ordered in from the lodge’s Skycrest Restaurant. A good night’s rest in the cabin’s comfortable beds later, we were back on the move. 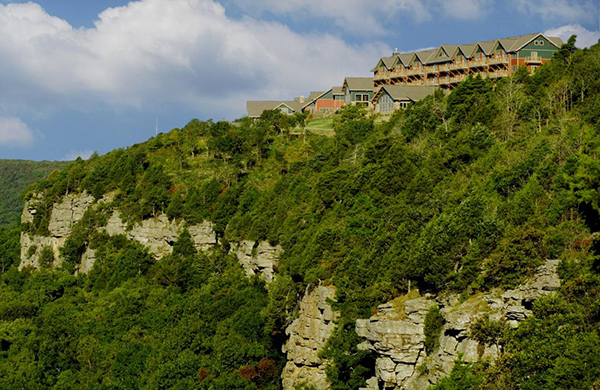 The lodge atop Mount Magazine.

We took advantage of the cool summer morning at nearly 3,000 feet up by taking a hike. We first traversed the famous Signal Hill Trail, and then tapered off to the Old Lodge Trail, which has some of the most stunning views I have ever witnessed in Arkansas.

Then, we put the rubber to the road again and ventured into Paris. The town itself is modeled after the Paris, fit with a mock Eiffel Tower and the famous Locks of Love bridge where smitten couples can padlock their infatuation for each other forever. My husband and I have actually visited this part of town before, years ago, and were able to find our old lock from then.

We filled the rest of our day unlocking as many new memories as we could muster. Of course, there was plenty of shopping to do at the many boutiques of the city square and enough restaurants to fill a week with new tastes.

If you’re itching for something unique to do without leaving the boundaries of our state, I’d say a trip to Paris is as good a choice as any.