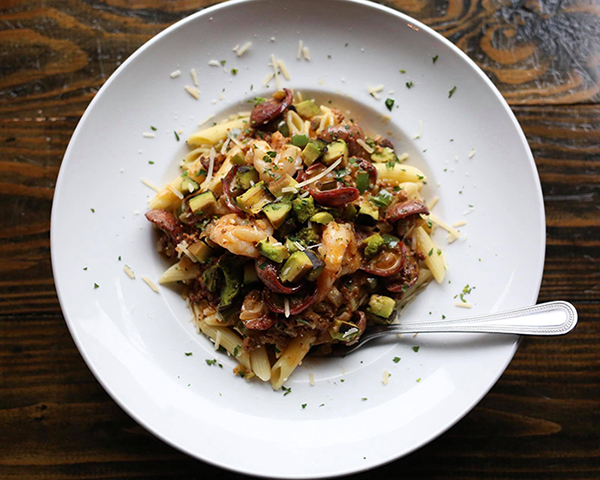 If there’s one fact of life that holds true in virtually any situation you can name, it is that simple is better. In almost every aspect of your life — relationships, work, family, health — a simple yes or no generally suffices. You go to a job interview, you want a straight answer. You go to your doctor, you want stuff in plain English. You sit in church, you want your marching orders for the week and pronto.

Now of course, everything can’t be a one-liner and when it comes to people like airline pilots, heart surgeons and building engineers, I appreciate, frankly, their willingness to think on considerably more complex levels. But nothing enrages one quicker than someone or something making life unnecessarily complicated.

In the food world, I can’t think of anything that better makes my point here than pasta, the simple union of water and flour. That’s really it, although some recipes jazz up the formula a bit with eggs, olive oil and other additives. But you get the idea — pasta proves that to create something transcendent, often you really only need a few staple ingredients, things everyone can pronounce and that you probably have sitting in your pantry right now.

For this reason and many others, pasta represents all that is good and foundational in our lives, the very definition of comfort. And while it is most easily and often associated with Italian families — who, stats show, eat more of the stuff than any people on Earth — the dish is far bigger than any-one nation claims.

As a matter of fact, as the National Pasta Association (NPA) points out, there’s evidence that it was eaten first in ancient China and Greece somewhere around 4,500 years before the Italians had their first bowl of noodles. Italy made up for lost time, however, with recipes showing up in 12th-century cookbooks and culinary innovations ever since that transformed the dish in new and exciting ways.

America was pretty late to the pasta game, roughly coinciding with the original colonies, but it caught on fast enough that Thomas Jefferson saw fit to bring the first macaroni-making machine to the toddler United States in 1789 and later to design his own. The first pasta factory opened in Brooklyn in 1848 by a Frenchman; within 50 years the industry had grown enough to launch the NPA’s forerunner organization in 1904.

But the best thing about pasta is not the dish’s heritage but our own and where and when the two fold into one another. Like those cans of Chef Boyardee that never seemed absent from the cabinet or the simple joy of the royal blue Kraft box, within which you found their signature macaroni and cheese. Not haute cuisine, I grant you, but not bad as childhood memories go, either.

Restaurateurs Gio and Vince Bruno, brothers and co-owners of pasta stalwart Bruno’s Little Italy, have been dancing to the music of pasta their whole lives, learning macaroni at the elbow of their father Jimmy, who founded the family business in 1947.

“Most of our pasta recipes, the majority of them, came from our father,” Gio says. “We have customers that were eating with my father before we were born who still come in and want to taste the same one. So that’s what we do, we try to prepare things exactly as we were taught.

“Our strand pasta is not homemade, we buy dry strand pasta, boil it, and then put our sauces on it and that’s actually a preference. Fresh strand pasta is almost impossible to cook al dente. It overcooks fast. With fresh pasta, strand pasta, our volume is so great, we don’t have time or space to make all the strand pasta even if we wanted to. But the pasta that goes in all Dad’s stuff, like the lasagna and manicotti, ravioli, all that, that’s all homemade pasta.”

Bruno’s is, without question, Ground Zero for traditional Italian food in Little Rock, arguably throughout Arkansas, and stacks up with anyplace in the South. And while it takes a great deal of skill to do what they do, at the heart of these dishes is still the fundamental element of pasta noodles cooked to a perfect doneness and presented in their hearty and classic glory.

If you don’t believe me, stick to the spaghetti menu sometime and order it as stripped-down as you please, with the wonderful marinara or better yet, anointed with just garlic butter and dusted with fresh Romano cheese. You’ll see how satisfying simple can be.

“I guess what sets it apart is we just do it very old school, we just keep it the way that the recipe that Dad had,” Gio adds. “I use the flour [he] wanted to use, I don’t use any newer added stuff. We do everything the way Dad wanted it done.”

There’s another element to pasta that makes it indispensable in the story of our lives. Think on the really important meals in your life with your significant other — prom night, the first date, the night you popped the question and the commemorative evenings that followed thereafter celebrating all the above. Where did you go, a burger joint? Did you gnaw on a plate of ribs right before handing her a sauce-soaked ring? Probably not.

If dinner was involved, and if you had any sense at all, it was served in a dimly lit, softly-serenaded space, the magic moment bookended by a nice plate of linguine or angel hair. Maybe it’s the carbs which science shows releases serotonin, Mother Nature’s happy drug in the brain, or the wine that always makes good pasta better, but there’s something about an Italian dinner that spawns romance. It happens in Bruno’s Little Italy all the time. 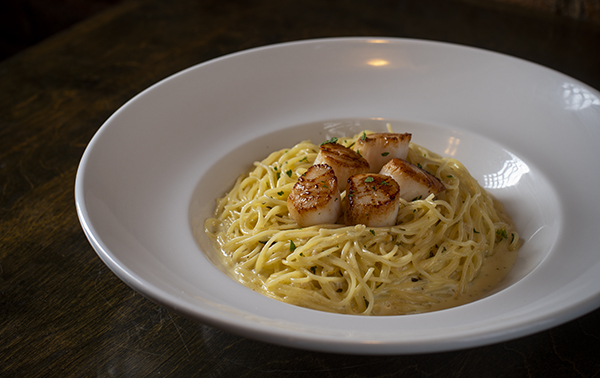 “We have at least one couple, well, I would say more than one, that ate here on their honeymoon or their wedding night that are still coming back here for their anniversary since the ‘50s,” Gio says.

“A guy proposed the other night, just a week ago, in front of the whole full restaurant. Luckily our sauté chef knew how to do a ganache to write, ‘Will you marry me?’ on her cheesecake.” Vince says. “On a weekly basis, there’s people getting engaged here, celebrating anniversaries …  So I agree completely that pasta is very romantic.”

Today there are more than 600 shapes of pasta recognized by the International Pasta Organization and as you might expect these include gluten- and wheat-free specimens, so it’s not a stretch to say it’s one of the more inclusive and approachable food items out there. There is pasta in the shape of shells, wheels, tubes and strands of various gauge. There’s vegetable pasta that tricks you into thinking you’re eating healthy even though that’s, of course, not the point.

Pasta curls lovingly around your beloved’s fork or through your baby’s fingers. It’s an entry dish for a new cook, sustenance for the broke college student and a staple for the first apartment’s larder. Pasta is the sacred heirloom of your nana’s kitchen and sits in a place of honor at your table, symbolizing the individual turns of individual lives that wind and tangle as family.

“Every new customer that comes in, when they say, ‘What do I eat?’ the very first thing I always say is, ‘If you want a classic item of my dad’s, if you want a white sauce item, spaghetti carbonara,’” Vince says. “I’d probably have that, as well as our pizza, if it was my last meal. I love our sausage; we’re the only people that put our Italian sausage in the carbonara. We’ve been making it since ‘49.”

Shadrachs Cozies Up to Conway
June 21, 2022
Go to Top
Never Miss An Issue!