We’re all a bit nuts in Arkansas, especially during National Pecan month!

April is National Pecan Month, and we’re going nuts for these native Arkansas nuts. An estimated 2.6 million pecans are harvested from orchards around Arkansas each year, earning the pecan the spot as our state’s official nut. Sure, you can pop them straight from the shell or throw them in a pie, but we’re loving the way these creative Arkansas chefs and restaurants have thought outside the pie plate to create some truly unique dishes using our favorite nut.

Where: Ira’s Restaurant in Little Rock

Where: Stoby’s Restaurant in Russellville

Stoby’s Restaurant is an Arkansas legend, famous for their juicy burgers and killer pies — like their Possum Pie, which has nothing to do with roadkill and everything to do with creamy chocolate, whipped vanilla and crunchy pecans. But it’s their Cranberry Chicken Salad Pita that earned them a spot on this list. A hearty scoop of creamy chicken salad rounds out the center of a warmed pita pocket with a sweet cranberries and crunchy pecans adding texture to this decadent sandwich.
stobys.com

Where: The Capital Bar and Grill in Little Rock

Sweet and salty with just the right amount of cayenne pepper to give them a little spice, these fried pecans are the ultimate bar snack. Buy them by the pound from behind the bar at the Capital Bar and Grill to kick up your home-cooked creations, from pies and bars to salads or granola.
capitalbarandgrill.com

Where: Farmers Table Café in Fayetteville

As if these fluffy, plate-sized pancakes weren’t indulgent enough, with farm-fresh ingredients like free-range eggs and locally sourced sweet potatoes in the batter, Rob and Adrienne Shaunfield grill these breakfast staples in organic coconut oil and top them with whipped cinnamon butter and candied pecans. Enjoy them with a healthy pour of organic maple syrup for breakfast Tuesday through Sunday or for Brinner (breakfast for dinner) on Fridays and Saturdays.
thefarmerstablecafe.com 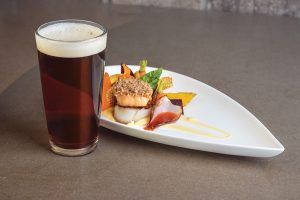 Where: Heritage Grille in Little Rock

Stone’s Throw brewers use actual Arkansas pecans to give this copper-colored ale its signature flavor. Its nutty notes make it the secret ingredient in many cocktails, including the brewery’s much-beloved holiday eggnog. Get this special release beer on tap, exclusively at the Heritage Grille Steak & Fin.
heritagegrillelittlerock.com 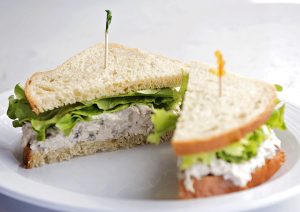 Where: Neighbor’s Mill Bakery in Harrison

It was their cranberry pecan bread that put them on the map, but it’s their honey pecan chicken salad that solidified Neighbor’s Mill Bakery in our pecan-loving hearts forever. Pair the two together for one awesome pecan-packed sandwich that gets a delicious crunch from locally grown organic pecans, sourced from York Pecan in Foreman and roasted fresh at the bakery.
neighborsmill.com 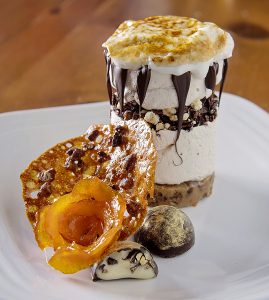 Where: Tusk & Trotter in Bentonville

Chef Rob has no fear infusing all aspects of his menu with pecans, from his Brussels sprout salad with blue cheese and pecans to his oatmeal cream pie with foie gras mousse and candied pecans. His latest creation offers a sweet end to a decadent meal, where a heaping scoop of homemade crunchy pecan butter ice cream slowly melts inside an edible shell of pecan brittle deliciousness.
tuskandtrotter.com

Where: Joyful Macarons in Searcy

Baker Kaytlin Robinson began making macarons out of necessity a few years ago, when a late-night craving for macarons hit and there was no place to get these tough-to-make treats within three hours. Now her orders tiptoe close to the hundreds each week in Arkansas alone, where she bakes and ships all of her 18 flavors from her Searcy kitchen and donates a portion of her proceeds to a different children’s charity each month. We love her butter pecan macaron, which is topped with chopped pecans and filled with a rich butter pecan buttercream filling; it’s the perfect marriage of Southern flavor and French technique.
facebook.com/pg/joyfulmacarons

Where: The Bread Box in Fort Smith

The Bread Box has a penchant for pecans, tossing them in their salads, desserts and breads on their Fort Smith menu items. Although they make a mean pecan pie, they’re best known for their handcrafted sandwiches made with freshly baked bread. Our favorite is anything served on their thick sliced cranberry pecan bread.
thebreadboxandmore.com

Where: The Root Café in Little Rock

The secret to The Root Café’s spectacular Spiced Pecan Salad can be traced to the rich Arkansas soil that grows the plump pecans that top this farm-fresh dish. Sourced from a farm just outside Grady, the raw pecans are transformed into the salty-sweet treat as soon as they arrive at the café, before acting as the cherry on top of this healthy and hearty dish. The salad also features fresh strawberries from Barnhill Orchards in Lonoke, feta cheese from White River Creamery in Elkins and a house-made cumin vinaigrette dressing. The spiced pecans are also sold at the café by the jar, making adorable gifts in half-pint, pint and quart-sized quantities.
therootcafe.com 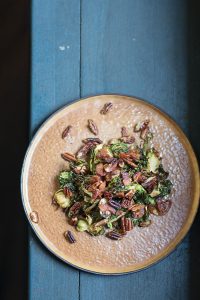 Although this menu item is served as a side dish, the Brussels at Table 28 are far from an afterthought on Chef Scott Rains’ menu. Chef Rains puts a nutty twist on fried Brussels sprouts with his signature side dish that blends the salty flavor of bacon with the delicious crunch of pecans and fried Brussels sprouts.
theburgundyhotel.com