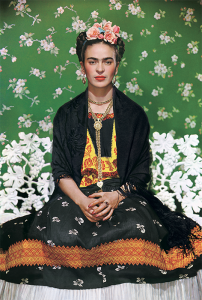 Visitors to the Arkansas Arts Center in February will have the chance to admire its first exhibition dedicated to iconic artist Frida Kahlo. Photographing Frida: Portraits of Frida Kahlo/ Fotografiando Frida: Retratos de Frida Kahlo, debuts on February 1, gives art enthusiasts a very rare opportunity to see one of Mexico’s most celebrated painters as captured by some of the 20th century’s most influential photographers.

Visitors to the Arkansas Arts Center in February will have the chance to admire its first exhibition dedicated to iconic artist Frida Kahlo. Photographing Frida: Portraits of Frida Kahlo/ Fotografiando Frida: Retratos de Frida Kahlo, debuts on February 1, gives art enthusiasts a very rare opportunity to see one of Mexico’s most celebrated painters as captured by some of the 20th century’s most influential photographers.
The new exhibition will feature 65 images of Kahlo, both as art and an artist. The photos serve as a photo journal into her life as seen through the lens of some of the era’s greatest photographers, including Lola and Manuel Álvarez Bravo, Imogen Cunningham, Emmy Lou Packard, Graciela Iturbide, Nickolas Muray, Edward Weston and more.
Visitors to the exhibit have the opportunity to experience the full spectrum of Kahlo’s life, from adolescent to acclaimed artist, from fashion icon to passionate lover. According to the exhibit’s curators, the images range from casual snapshots to intimate family photos to artfully posed studio portraits.
“Photographing Frida is an opportunity to see Frida Kahlo as you’ve never seen her before,” says Chief Curator Brian J. Lang. “These images defined not only the way the world saw her — and continues to see her — but how she saw and depicted herself through her own work.”
Kahlo was born in Mexico City, in 1907. Her father, Guillermo Kahlo, was a photographer, and often photographed young Frida. She became acquainted with the power of her own image through her father’s portraits.
The camera allowed Kahlo to explore her own identity, document her marriage to muralist Diego Rivera, express her strong political views and artfully reveal her lifelong struggle to overcome her physical challenges. Through photography, Kahlo ultimately defined the principal subject of her art — herself.
Kahlo lived a short life that was marked by pain and physical afflictions. She was affected throughout her life by spina bifida, a congenital spinal condition. As a child, Kahlo contracted polio, which resulted in one of her legs being shorter and weaker than the other. When she was 18 years old, Kahlo was nearly killed in a bus accident, breaking ribs, both her legs, her collarbone and pelvis. She used her pain and hardship, which lasted a lifetime, to inform her art and her identity.
Kahlo also used fashion to express her identity, as well as to conceal her physical disabilities from the public. Her love for fashion is evident throughout the Arkansas Arts Center exhibition, with images highlighting her traditional Mexican clothing – Tehuana dresses, huipils and rebozos, all accessorized with beautiful beaded jewelry. Kahlo was able to hide her injuries under the voluminous skirts and flowing dresses that she is remembered for wearing. 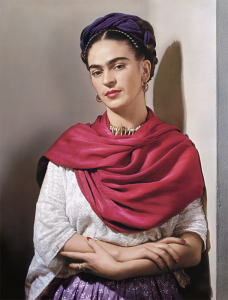 According to curators, the pre-Hispanic clothing Kahlo was so famously fond of allowed her to express her belief in Mexicanidad — the nationalist movement that found its inspiration in pre-Columbian Mexico after the end of the Mexican Revolution.
Kahlo was photographed until her death in 1954. She became something new to each photographer she encountered, ever-present and continually beguiling, but made different through their lens. She, herself, became a work of art in the process.
“I insist that Frida was a special being, not a person one ran into every day,” photographer Lola Álvarez Bravo said in a press release. “When she spoke, when she moved, when she painted, when she expressed herself, she already was inspiring something. To me, she was like birds and flowers and knitted quilts, a Mexican mood concentrated in an epoch and all expressed through her. She was like that.”
The exhibition, which was organized by the Arkansas Arts Center in collaboration with Throckmorton Fine Art, is available to the public from February 1 to April 14. A fully illustrated catalog, Mirror, Mirror: Portraits of Frida Kahlo, featuring an essay by Salomon Grimberg, a noted authority on Latin American art, accompanies the exhibition.