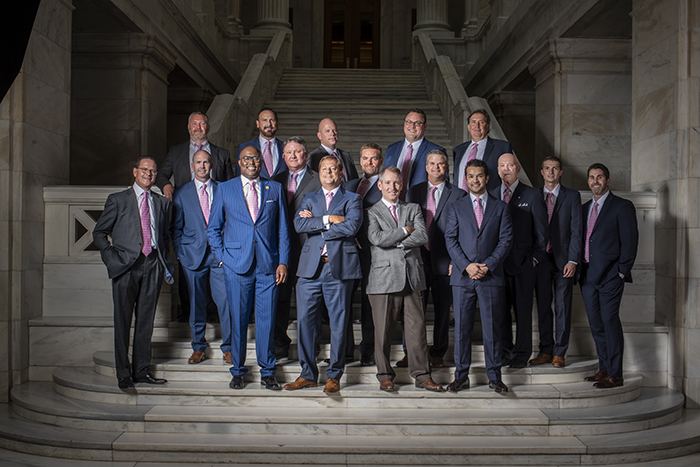 Arkansas has the sixth-highest incidence of breast cancer and the third-highest mortality rate in the United States. Susan G. Komen Arkansas is fighting to find a cure and end breast cancer once and for all. At the center of this fight is an unlikely group. Men. The Pink Tie Guys are men who have all been touched in some way by breast cancer. Some are doctors, some are supporters and some are survivors of male breast cancer. They can be spotted by their signature Komen pink ties that are worn as a symbol of hope, courage and strength.

The initiative is aimed at engaging people in conversations about the disease and adding a male voice to the movement. The Pink Tie Guys educate Arkansans on the importance of early detection in both women and men and encourage people to join the fight and invest in the cure. The men themselves have a goal to each donate $1,500 to Komen Arkansas.

The Pink Tie Guys live and work within the 68 counties that make up the Arkansas Affiliate Service. Seventy-five percent of the money the men will help raise will stay within those 68 counties to fund local breast health programs, and the other 25 percent will go toward national research efforts that are currently focusing on more effective treatments. They will also attend several events such as Runway for the Cure that will be held on Sept. 5.

When you think about breast cancer, it is most likely that your mind will go to women. Male breast cancer is something that frequently falls through the cracks. While only less than 1 percent of breast cancer cases occur in men, for the one in 1,000 who will be diagnosed, early detection and treatment are key.

It is a common misconception that breast cancer only occurs in women, but everyone is born with breast tissue containing ducts that carry milk. Hormones in a woman’s body cause the tissue to grow, while it normally remains dormant in men. According to the National Breast Cancer Foundation, even though men have a small amount of breast tissue, cancer cells can still invade. Most commonly, male breast cancer is classified as ductal carcinoma — cancer that starts in the milk ducts. It is so rare because these ducts are often very underdeveloped.

Male breast cancer is very similar to breast cancer in females; both will experience the same symptoms, such as a lump and changes to the skin and go through similar treatments, such as surgery, chemotherapy and radiation. However, men experience a higher mortality rate because of a lack of awareness of the disease according to the National Breast Cancer Foundation. Men are less likely to think that their symptoms may be cancer and delay going to the doctor. The longer treatment is delayed, the more the risk increases.

Men with a family history of breast cancer, excessive radiation exposure, increased estrogen levels or testicular conditions are at an increased risk of being diagnosed with breast cancer. The National Breast Cancer Foundation recommends consulting a genetic counselor if you are diagnosed to test for defective genes that may impact your children’s health.