College of the Ouachitas opens largest print farm in the world and transforms lives. 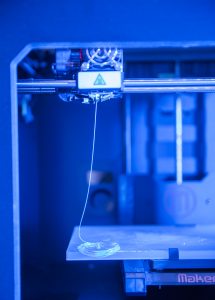 [dropcap]Spools[/dropcap] of brightly colored plastic filament slowly spun. The plastic melted and extruded in each of the three-dimensional, or 3-D, printers working away at the College of the Ouachitas (COTO) in Malvern, Arkansas. The filament also extruded — back and forth, layer upon layer — to form physical objects from digital files.

These 55 printers at COTO make up the largest 3-D print farm in the world. Under the direction of Jody Callahan, the college’s division chairman for Applied Sciences, the Robohand Print Farm officially opened June 28 with 55 MakerBot 3-D printers, five 3-D stationary scanners and four hand-held 3-D scanners. Because the printers seem to have individual personalities, each has been given a name to match.

While there are no crops at this particular farm, the school is using its collection of 3-D printers as both an outreach tool and a life-altering application of this technology.

“Just like an agriculture farm cultivates crops, with a 3-D print farm we cultivate ideas,” Callahan said. “Labs are introverted, but farms are extroverted.”

One of the ways the college is using its farm is through a strategic alliance with Robohand, a South African-based company that designs and manufactures prosthetic hands for children.

During our visit, Stephen Schoonmaker, COTO president, shared with us a video of a 2-year-old South African boy named Micah being fitted for a prosthetic hand; this wasn’t an average prosthetic hand — he was able to use it immediately.

A custom-fit, mechanical hand for a child may sound like something from a sci-fi movie, but it is actually affordable, and the Robohand is a very user-friendly prosthetic for small children. 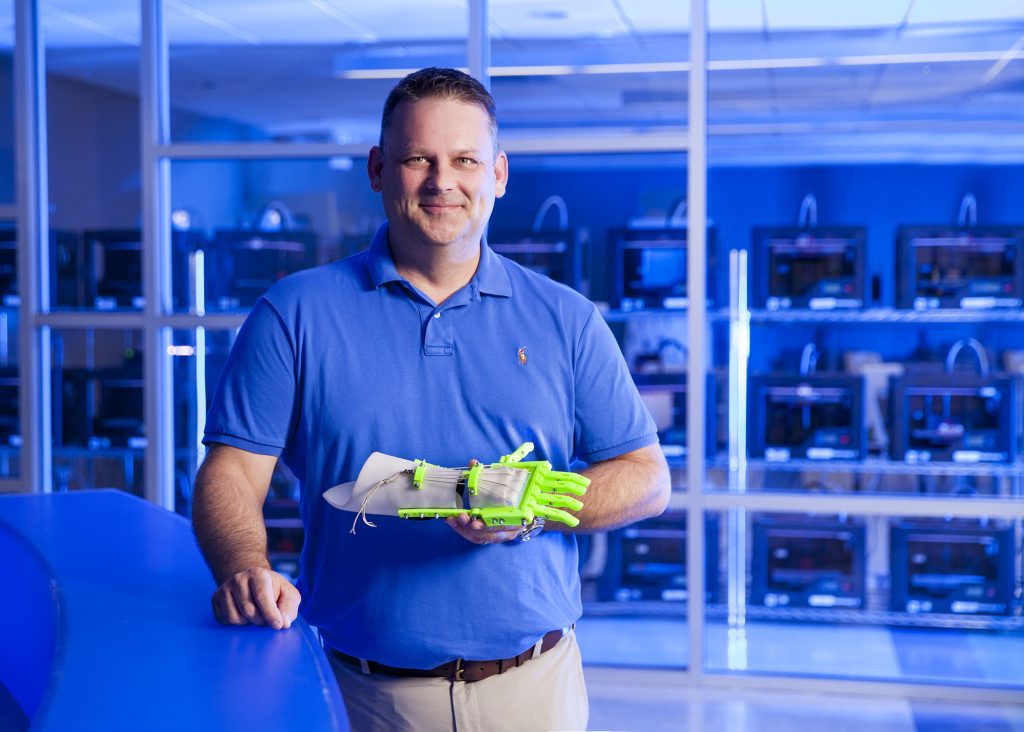 The print farm is under the direction of Jody Callahan, the division chairman for Applied Sciences at the College of the Ouachitas.

As Callahan watched the video again, he recalled the powerful emotions he felt as he helped fit Micah for his new hand.

“I’m a combat veteran, and I cried,” Callahan said about watching the little boy use his hand for the first time. “This was emotionally draining, but it’s a wonderful thing.”

Schoonmaker said he believes the college’s new 3-D print farm is being put to good use by partnering with Robohand to manufacture these hands for children, most of whom are born with amniotic band syndrome, which occurs when a baby becomes tangled in amniotic bands. This restricts blood flow and can cause the baby to be born with missing fingers or limbs. Promisingly, plans to manufacture a Roboleg are in the design phase.

Schoonmaker compared Robohand to a prosthetic arm his nephew got after losing his in an accident. “It cost about $80,000 and was very heavy,” he said. “Robohand is a simple device using muscle movement.” 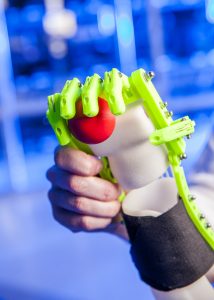 A Robohand printed at the world’s largest 3-D print farm uses muscle movement to control grip. The hands are easily used by children.

The cost of a Robohand is $500, but this also covers the expense of a hand for someone who needs but can’t afford one.

“We give you the file, and you can have it printed somewhere else, too,” Callahan said. “You can change the size in the program to accommodate growth.”

The child can choose his or her favorite color, and parts of the hand can be printed — rather than the entire hand — in case a finger or other area is broken. Callahan said it takes about seven hours to print a hand, and then it is hand sanded with nail files. Each hand is custom-fitted to the child, right down to the joints. The hands are made to replicate the fluid motion of an anatomical hand, and there is no adjustment period or therapy involved before use. Almost immediately after putting it on, children can draw and throw and catch a ball, things they’ve been unable to do.

“I envision joint ventures with Robohand on a global scale, helping to make and distribute hands and arms to children and adults in countries all over the world,” Schoonmaker said about the future of the alliance between Robohand and the college. “I see our alliance growing stronger as we continue to develop our abilities with this technology, and where new design ventures may lead Robohand. Jody [Callahan] and I are strong advocates for 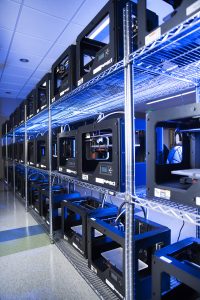 With 55 3-D MakerBot printers, the College of the Ouachitas, in Malvern, Ark., is home of the largest 3-D print farm in the world.

Robohand’s vision and mission. We hope to have a strong and evolving relationship with the company, a relationship that benefits the world’s gigantic extended family with the greatest needs and the most limited resources.”

The college was in competition with other universities, such as Yale, Princeton, Columbia, the University of London and the University of Arkansas at Fayetteville, to contract with MakerBot for the print farm.

“MakerBot told us that they had been in contact and had interest in this 3-D printer ‘classroom’ (that was eventually named an innovation center) concept from these institution. … But to my knowledge, none of these institutions ultimately bought into the concept — certainly not to the level of our print farm,” Schoonmaker said.

He and Callahan traveled to Johannesburg to meet with and learn from Richard van As, who designed the first Robohand after losing four fingers in a 2011 woodworking accident. In September 2012, the first working prototype of a Robohand was made. The following month, van As fine-tuned his creation and fitted more than 200 hands.

Callahan and van As are also working on a curriculum to utilize the print farm and to teach students the design aspect of the 3-D printing process, as well as proper usage of the equipment, which Schoonmaker said could be the future of manufacturing.

COTO officials plan to open the print farm to the public, helping to ensure the stability of the enterprise. 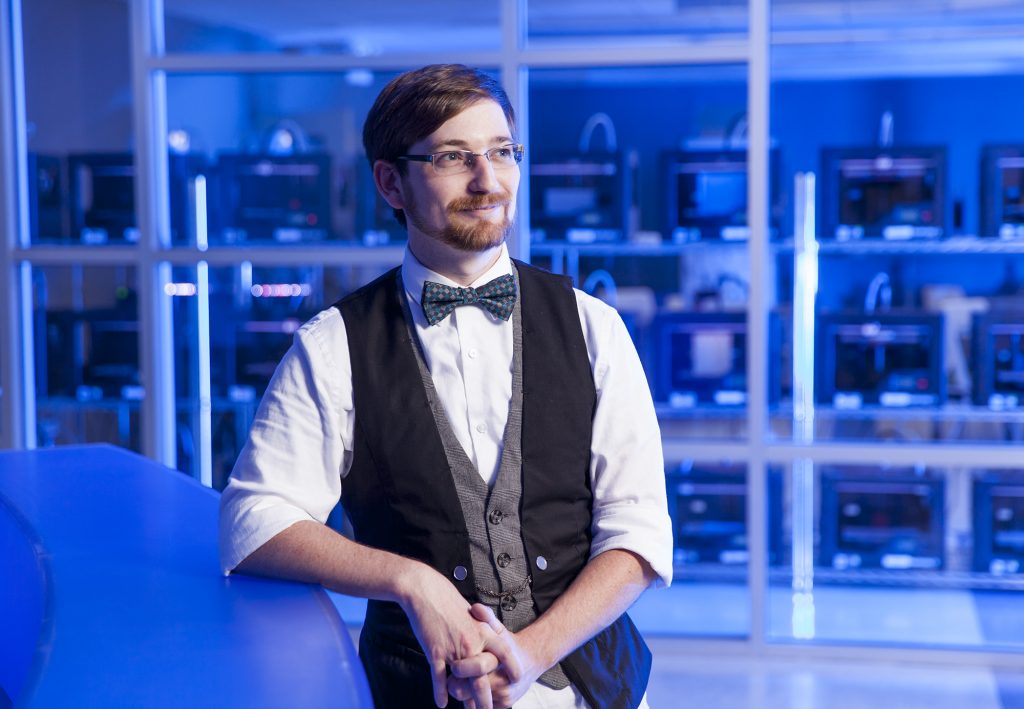 Michael Karr is the 3-D printer technician at the college.

“All the software we use is freeware,” Michael Karr, 3-D printer technician, said. “When someone comes in to learn, we want him or her to have access to the software at home. We like to empower people.”

Schoonmaker said he has great expectations for the program, but noted that with rapid changes in technology, the college will be challenged to fully grasp its innovative potential.

“… When we began this program, so many developments occurred in the first six months as 3-D printing exploded on the technology scene across the country in a way that could never have been expected,” he said. “I would have to say that I expect this program to evolve dramatically and unpredictably for the next two to four years. … [At COTO, our goal] wasn’t ever about being the largest 3-D print farm in the world; we didn’t even know about the concept of print farms at the beginning. What we knew was that this was a transformative technology that turned individuals’ thoughts into everyday design and personal manufacturing,” he continued.

“As we move forward, I can only expect great things from this program in the next few years, if the college continues to embrace bold decision-making, active and ongoing research and persistent pushing of the envelope to broaden and refine the practical applications of this technology.”