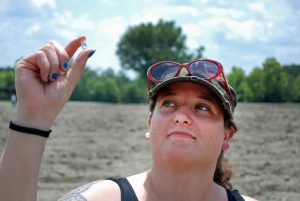 Bobbie Oskarson with her 8.52-carat diamond, found at Crater of Diamonds State Park

(NORTH LITTLE ROCK, Ark.)—Arkansas’s Crater of Diamonds State Park at Murfreesboro offers a unique experience for visitors—the opportunity to search in the eroded surface of the eighth largest, diamond-bearing deposit in the world. And any diamonds or semi-precious stones found in that 37 1/2-acre plowed field of greenish brown dirt are theirs to keep. Each diamond is unique, as is each diamond finder’s story. Through a partnership between Stanley Jewelers Gemologist of North Little Rock and Embee Diamonds of Prince Albert, Saskatchewan, Canada, the public is invited to watch as the story of the 8.52-carat white diamond found on June 24 by park visitor Bobbie Oskarson of Longmont, Colorado, continues to unfold. Named the “Esperanza” for her niece and the Spanish word for “hope,” Oskarson’s high quality gem will be cut by master diamond cutter Mike Botha, president of Embee Diamonds, during a special in-store event at Stanley Jewelers Gemologists, September 9-12. The store is located at 3422 John F. Kennedy Boulevard. Hours for viewing the diamond’s cutting will be 10 a.m. to 5 p.m.

According to Laura Stanley, vice president of Stanley Jewelers Gemologist, “Embee Diamond’s Mike Botha is a renowned diamond cutter who has worked with many large notable diamonds. As a member of the American Gem Society (AGS), he is looking forward to the opportunity to cut the ‘Esperanza,’ an American diamond of very high quality.” She continued, “This is a spectacular 8.52-carat rough stone, a colorless crystal of extremely high clarity. Embee Diamonds has announced that Mike will transform what nature formed into a 147-facet triolette shape of his own design. Resembling a teardrop, this custom cut will be a composite of emerald and trapezoid giving the gem much brilliance. We are hoping it will be five carats.” 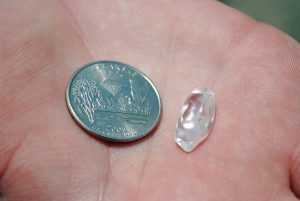 Stanley noted that once the diamond has been cut and polished, it will go to the AGS Laboratories for a final grading report. Next it will be mounted in a custom-designed pendant created by award-winning, U.S. designer Erica Courtney of Los Angeles. “Every one of us involved in this diamond’s journey is an AGS member, and we all feel so honored to spend time with this spectacular American diamond that is receiving so much national and international attention,” Stanley said. The gem will be offered for sale this fall.

Mike Botha said, “It is an honor and a privilege to collaborate with Stanley Jewelers Gemologist on this Arkansas treasure. I’ve lost count of how many thousands of diamonds I’ve crafted over the last 48 years, and the ‘Esperanza’ may not even rank among the largest, but it is an exceptional diamond. And to cut and polish her at home in The Natural State is a once-in-a-lifetime event.”

According to Arkansas State Parks Director Greg Butts, “An important part of the Arkansas State Parks experience is making memories for our visitors. This diamond has already made so many special memories for Ms. Oskarson, the staff at the Crater of Diamonds State Park, members of the American Gem Society, and others who have spent time with this stone.” He continued, “Through the generosity of Stanley Jewelers Gemologist in North Little Rock and Embee Diamonds of Canada, we have all been invited to see this diamond, watch its cutting, and continue following its journey.” He emphasized, “The ‘Esperanza’ diamond is an Arkansas, American, and North American pride story. We thank Bobbie Oskarson, Stanley Jewelers Gemologist, and Mike Botha and Evert Botha of Embee Diamonds for allowing all of us to be part of this memory-making adventure.” 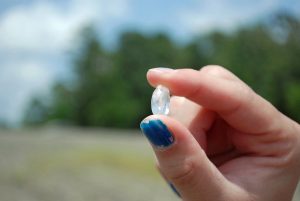 Clear white and icicle shaped, the “Esperanza” is the fifth largest diamond found by a park visitor since the state park was established at Arkansas’s diamond site in 1972. Now in the park’s record books, this 8.52-carat diamond is topped in size only by these previous four larger diamonds found by park visitors: the white 16.37-carat Amarillo Starlight found in 1975 by W.W. Johnson of Amarillo, Texas; white 8.82-carat Star of Shreveport found in 1981 by Carroll Blankenship of Shreveport, Louisiana; white 8.66-carat Illusion Diamond found in 2011 by Beth Gilbertson of Salida, Colorado; and brown 8.61-carat Lamle Diamond found in 1978 by Betty Lamle of Hitchcock, Oklahoma. [NOTE: The largest diamond ever discovered in the U.S. was unearthed at Arkansas’s diamond site in 1924 during an early mining operation prior to its becoming an Arkansas state park in 1972. Named the Uncle Sam, this white diamond with a pink cast weighed 40.23 carats. Another notable gem found at the site prior its becoming a state park was the 15.33-carat Star of Arkansas, a white diamond found in 1956 by Winifred Parker when the site was operated by Howard Millar as a privately-operated tourist attraction.]

Crater of Diamonds State Park Interpreter Waymon Cox said, “To our knowledge, no other diamond-producing site in the world offers the public the opportunity to search, as well as keep what is found, so we celebrate every visitor’s diamond find here at the park.” He emphasized, “However, most diamonds from the park are small and only about a quarter carat in size. But certainly large, notable diamonds have been unearthed here, too. The ‘Esperanza’ and the ‘Strawn-Wagner Diamond,’ found in 1990 by Shirley Strawn of Murfreesboro, Arkansas, are among the stones that exemplify the high quality that certain stones from the Crater of Diamonds achieve.”

[SIDEBAR: The Crater of Diamonds State Park staff plans to visit Stanley Jewelers Gemologists on Thursday, September 10, from 10 a.m. to 3 p.m. during the cutting of “Esperanza.” They will bring the “Strawn-Wagner Diamond” from the park so that it can also be on view at Stanley that day. Originally weighing 3.03 carats in the rough, this splendid stone was cut to a 1.09-carat gem and graded D Flawless, 0/0/0 (“Triple 0”), the highest grade a diamond can achieve. A diamond this perfect is so rare that many gemologists and jewelers never see one. This is the most perfect diamond ever certified in the laboratory of the AGS. The state of Arkansas received private donations and grant funds to purchase the “Strawn-Wagner Diamond” in 1999 so that this museum-quality, Arkansas treasure could be placed on permanent display at the Crater of Diamonds State Park where it was unearthed.]

[MIKE BOTHA BIOGRAPHY: Canadian master diamond cutter Mike Botha is president of Embee Diamond Technologies, Inc., a family-owned diamond cutting and polishing atelier located in Saskatchewan, Canada. An internationally acclaimed master diamond cutter, with four decades in the profession, Botha’s training and subsequent career began in South Africa—a journey which has led him to Russia and Canada—from Vancouver to the Northwest Territories to Saskatchewan. He worked as the occupational certification officer for the diamond industry in the Northwest Territories under the Department of Education, Culture and Employment, as well as the technical consultant for the Department of Industry, Tourism and Investment for their Government Diamond Certification Program. He led the Diamond Training Program at Aurora College in Yellowknife, Canada. During his six-year tenure with Aurora College, he developed and delivered programs, earning the college the coveted Yves Landry Award for Outstanding Innovation in Education. In 2008, he relocated to Prince Albert, Saskatchewan on the promise of its diamond mining future. His rare perspective, craftsmanship, leadership, academic achievements, and entrepreneurial enthusiasm combine to make him one of North America’s most iconic and successful diamond professionals. Botha’s lifetime of experience and in-depth knowledge of diamond cutting, polishing, and diamond crystallography formed the foundations for the critically acclaimed Sirius Star—the world’s brightest diamond— mined, designed, cut, and polished in Canada by a growing team of Canadian diamond cutters.]

Crater of Diamonds State Park is one of the 52 state parks administered by the State Parks Division of the Arkansas Department of Parks and Tourism. Additional information about Arkansas’s diamond site can be found at www.CraterOfDiamondsStatePark.com and www.ArkansasStateParks.com.

To follow the journey of this diamond via Facebook, search for the “Historic Esperanza Diamond Cutting” event page or www.Facebook.com/TheEsperanza. Use #esperanza.

Note to editors and news directors:
NEWS MEDIA INTERVIEW DAY SET FOR TUESDAY, SEPTEMBER 8
From noon to 5 p.m. on Tuesday, September 8, members of the news media will have the opportunity to conduct an individual interview with Mike Botha at Stanley Jewelers Gemologist. Appointments must be made in advance. Call 501-753-1081 to schedule a half-hour interview with him and to see the diamond. High resolution images of the “Esperanza” will be provided and photographers are welcome.