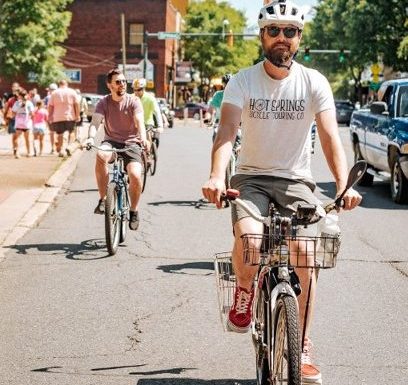 No, Seymour can’t not come along on the bike ride. This big boy of a Siberian Husky is tasked with minding the shop. But you can come, and you will most definitely want to.

The ‘Hot Springs Tour’ at Hot Springs Bicycle Touring Co. is a tasting ride quite unlike anything else offered in the United States. Seymour’s dog dad, Coleman Gocio, is a local, albeit one who cycled around the West Coast during college and Hawaii afterwards. When he boomeranged back to Arkansas a few years ago, he realized he had the knowledge, skills and experience to not only promote bike advocacy here, but to open his new business, Hot Springs Bicycle Touring Company. 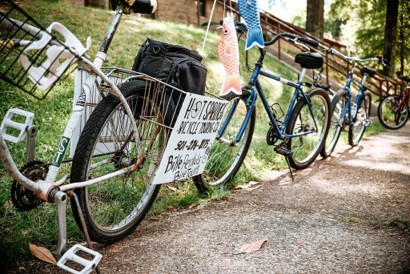 The Hot Springs Tour is for those who are ready to, “quaff the elixir,” as the true believers used to say. From Native Americans on, there have been folks coming to the “Valley of the Vapors” to drink and bathe in the therapeutic mineral waters in this town. What many people then and now, including locals, might have not known is that each of the five springs has its own unique taste.

How can this be? Well, Gocio will fill you in on that as you roll along. And no, it’s not all hot water either, and all the water here is tested for safety certification. 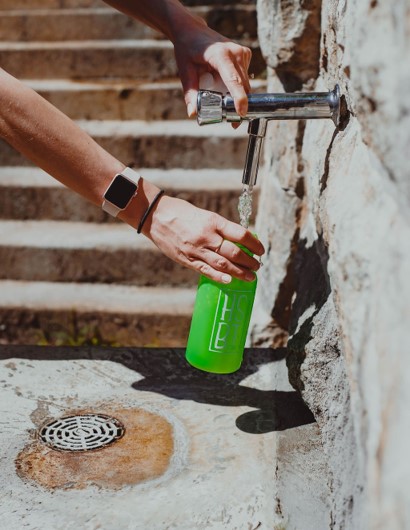 Who can come along for the ride? Just about anyone, including those who routinely say to Gocio, “I haven’t been on a bike in 20 years.” The hybrid cruisers he has available to rent are comfortable, easy to control bikes for adults and kids. Want a little more oomph in your pedaling? There’s e-bikes available as well. No one gets left behind, and there are bikes and bike trailers to transport even the youngest. Easy for all, the Hot Springs Tour is predominantly on flat, paved terrain. Should you later be inclined to take on Tower Mountain, Gocio has mountain bikes available for rental, including several for kids. It’s a great way to see if this is something they’ll like before investing in a bike of their own.

BYOB? Well, on this tour it stands for Bring Your Own Bike, which you can, if you like. Whatever your chosen ride is, The Hot Springs Tour will also offer you a close and personal look into historic downtown, home to baseball’s first spring training camp as well as a favored retreat among mobsters. The mob’s different families, like the Native American tribes before them, honored a cease-fire while in town. By the way, Al Capone liked the area’s water so much that during Prohibition, he had it shipped up north to use in his illegal hooch. And now, of course, it’s still being shipped all over the world. 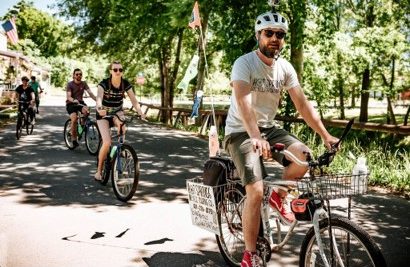 With his background in art, photography and music, Gocio makes for an informative, fun, safety-conscious host. Even if you want to go out on your own, drop by the shop anyway. Gocio is happy to share insider tips on the best riding areas around. He also offers up a lot of experience in repairs on a multitude of bike models as well as skateboards. Bring in your old board for the shop’s display wall, get a discount on a new one, and tool on down to the town’s skateboard park which is just a few blocks away. You’re going to want to go to the shop anyway, to meet Seymour. If you insist on his going on that ride with you…well, there’s t-shirts available with Seymour’s best mug shot on them. He’s a no-rental but he’s definitely going to be wishing you happy trails.