The small, but hip patio at Raduno is usually pretty busy on Sundays for brunch. The particular Sunday we visited was a holiday weekend – the official end to summer – and things were pretty quiet all along South Main (SoMa).

It was a rare Sunday without our toddlers and we needed a place to eat that would allow our mostly well-behaved large mixed-breed dog to tag along. Bernice Garden is our regular Sunday haunt, so Raduno seemed like a good fit. We called first to make sure the dog was welcome on the patio (he was), and we were off.

We have ordered take-out from Raduno a few times but have never been able to actually dine in (did I mention toddlers?). We were barely seated in our corner of the patio before our pup was treated to cool water. The morning turned out to be sunnier and warmer than expected so it was a welcome surprise. 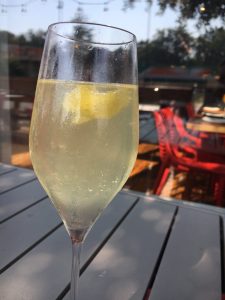 We started with a French 75, an herbaceous gin cocktail mixed with fresh lemon and sparkling wine decked out with a lemon peel. It was refreshing and delicious.

Our next order was for us and a small snack for the dog. The meatball appetizer off the regular menu (you can order from both menus) was perfect for the three of us. The dog got the two without red sauce and we split the other two. They were well-spiced and we liked the mix of beef and Italian sausage.

For the main course I ordered off the brunch menu and chose the bagel sandwich. Unfortunately, dairy is not in my diet and I had to forgo the cream cheese. To substitute the creaminess, I asked for the egg fried and they were happy to make the substitution. It’s not something I would normally ask, but it was early and were the only diners at that point in the day.

The bagel was cooked well, as were the eggs. I’m not sure the tomato was heirloom (as promised by the menu), but it was still a good tomato. The pancetta was thin, but well-cooked and added the perfect bite of salt. 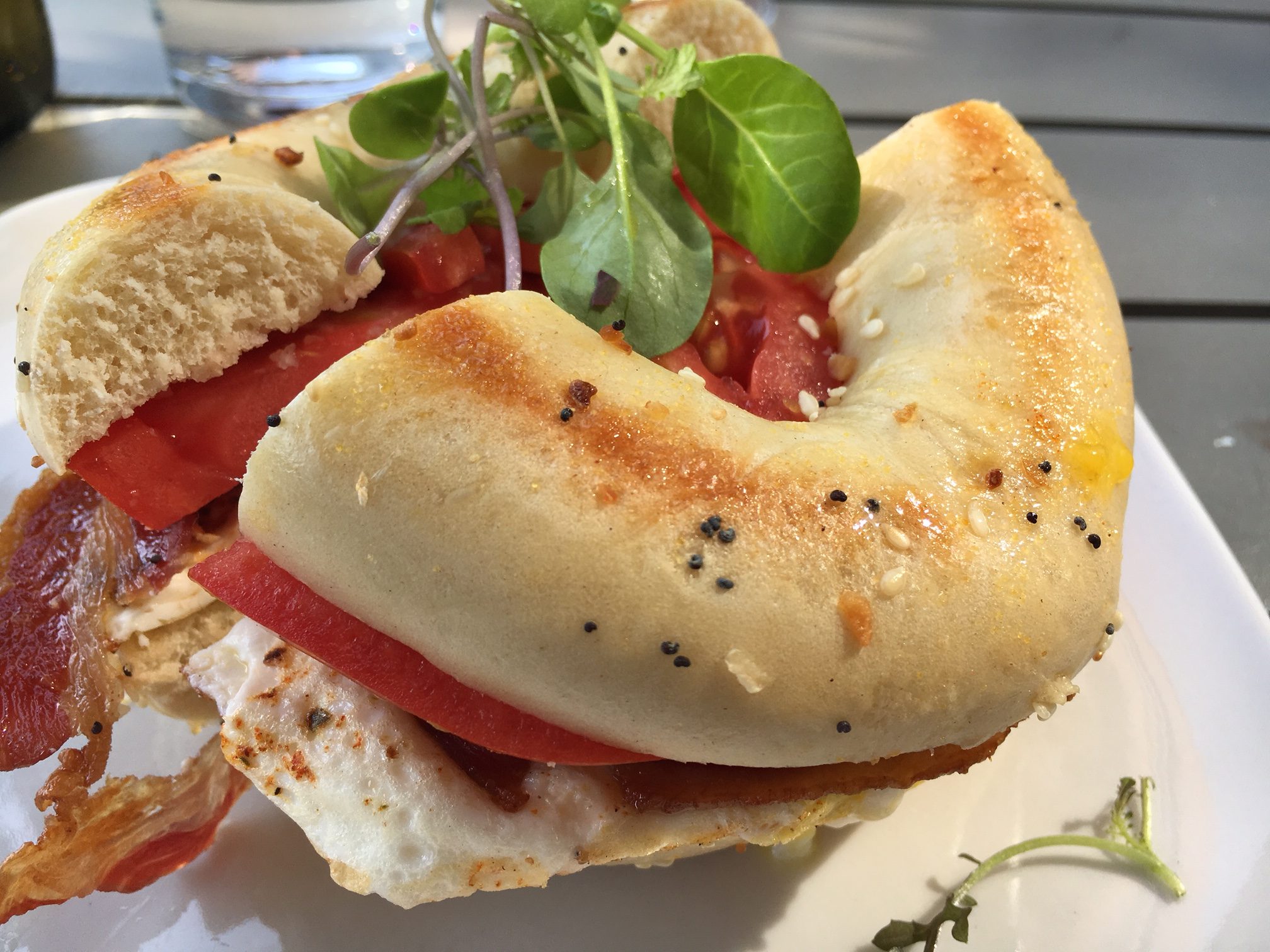 The bagel sandwich at Raduno

My human dining companion (husband) was very hungry and decided to order a pizza off the regular menu. Clearly with lack of cheese in our house, he was looking to indulge and not have to share. He chose the Capricciosa. It’s a briny mix of black and green olives, fennel sausage, pepperoni, meatballs, red onions, mushrooms, pepperoncini, topped with mozzarella over pomodoro sauce. I shouldn’t have worried about sharing, because he ate the entire pizza. The brick oven crust topped with the thicker pomodoro, mixed with the vinegar from the pickled peppers and fantastic fennel sausage was the perfect pizza for him. He said it was the best pizza he’s had in a long time, which is a fantastic accolade coming from him. He tends to be somewhat picky about his pizza. 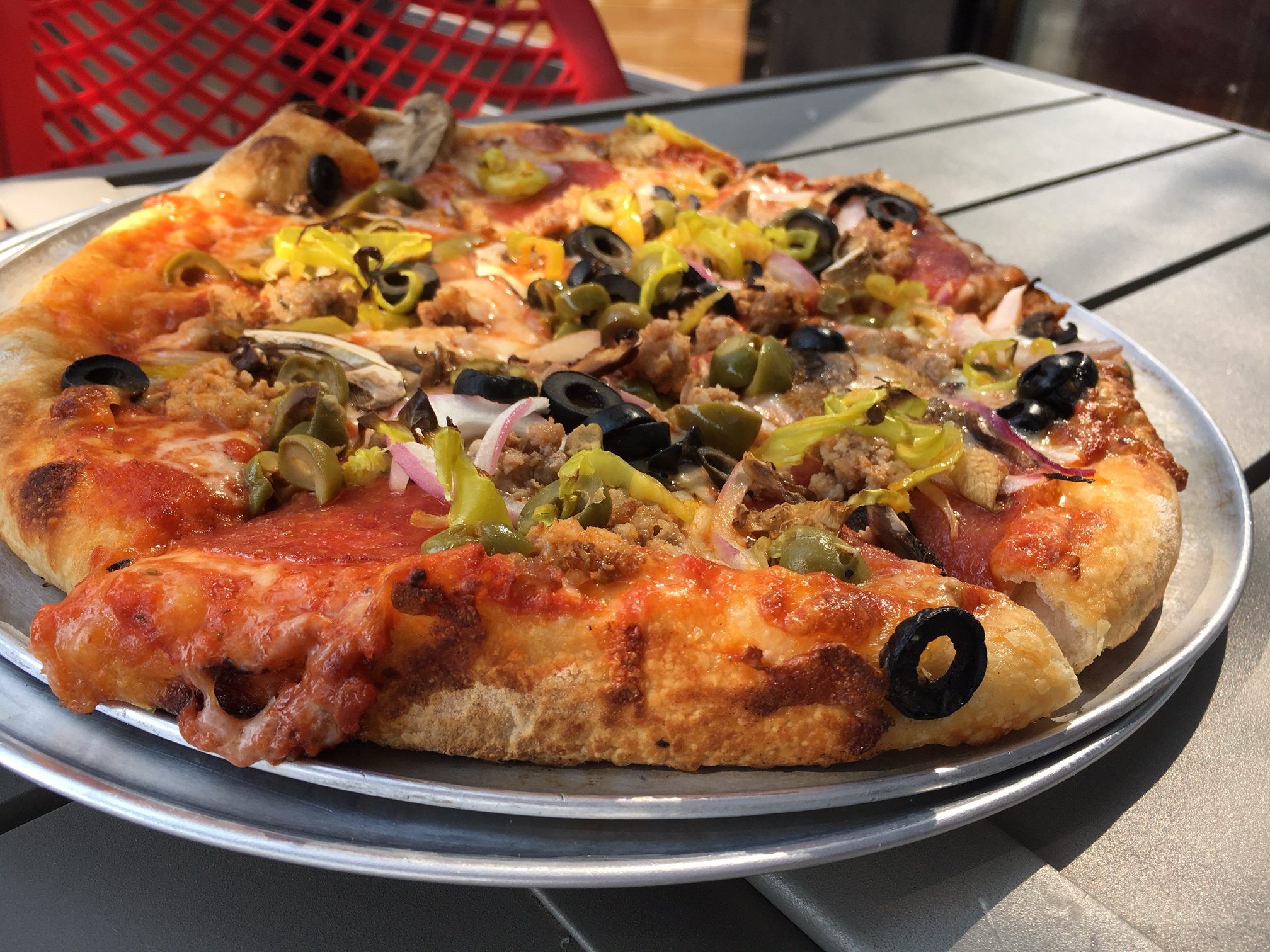 Our water cups, and bowl, stayed full. Service was attentive but not overly so. We are excited for our next trip to Raduno. Maybe one day we’ll even bring the kids…?