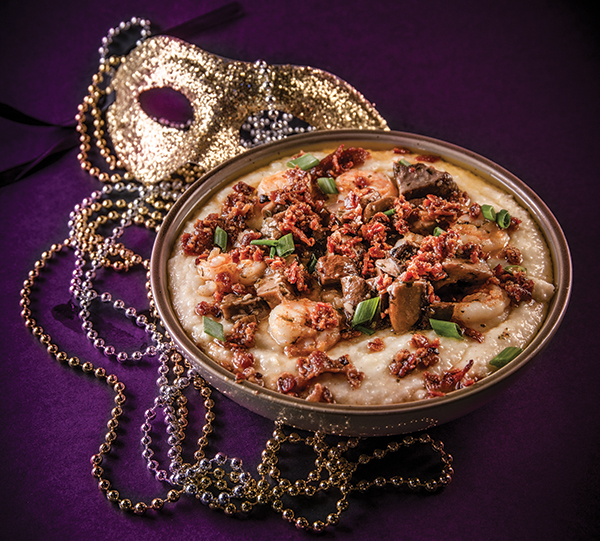 Little Rock is absolutely gaga about all things associated with New Orleans, from its culture and celebrations to the lifestyle, and, of course, food. Included in this vast gastronomic spectrum is a love for Cajun and Creole cuisines, as evident by our area’s plethora of restaurants.

Our options seem almost endless, but I would be remiss to start off an article like this without recognizing The Faded Rose, which is not only one of the most beloved restaurants in town, but a place that truly introduced us to bold flavors more than 38 years ago. For management, there is an easy explanation as to why we continue to be so passionate about Cajun cooking.

“There is a comfort level to Arkansans with the food. I also think there has been a nationwide trend for the last 20 to 30 years towards New Orleans and south-Louisiana food,” says Zac David, general manager at The Faded Rose. “Hurricane Katrina brought a lot of people up from Louisiana that appreciate the food and know it really well. This led us to up our game because the customer is much more knowledgeable about the food. We have to stay focused on giving people the best product we can.” 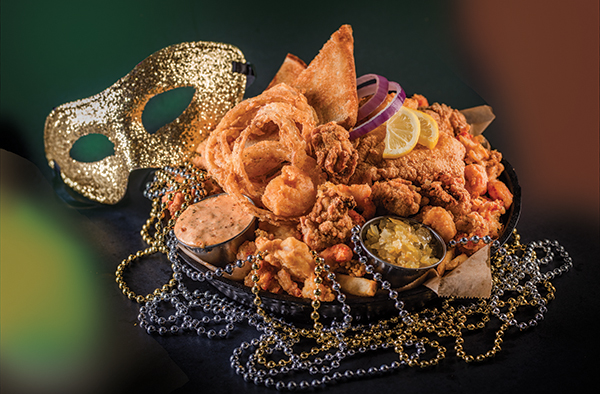 And they have done that with popular dishes like their okra, andouille sausage gumbo, red beans and rice, shrimp Tchoupitoulas and crawfish etouffee, just to name a few. The crawfish etouffee, with its rich roux and plentiful crustaceans, happens to be one of my favorite plates of food in town. The restaurant’s seasonal Wednesday crawfish boil, viewed by many as an event unto itself, routinely fills The Faded Rose with diehard mudbug lovers.

In one of Little Rock’s stranger restaurant anomalies, another wildly popular Cajun and Creole restaurant, Maddie’s Place, is right next door to The Faded Rose. While each spot possesses similarities to the other, differences remain, and in the end, both are cherished by loyal patrons who adore the personable service and authentic eats. 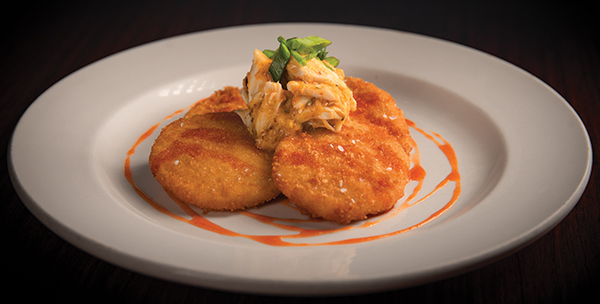 Brian Deloney, owner of Maddie’s Place, says, “I grew up going to New Orleans on family trips and just got to love the feel down there. When we moved to the city as an adult, I wound up at Emeril’s New Orleans working for Emeril Lagasse and started learning and cooking new New Orleans dishes. I loved being able to take the basics of Creole/Cajun dishes and adding our spin to them. I think that is what people enjoy about Maddie’s Place. It is that kind of new take on some classics. Knowing how to build layers of flavors for a dish is what I love about the style that comes from Creole/Cajun cooking.”

At Maddie’s Place, take your pick of dishes that tickle the taste buds with unmistakable Cajun seasonings and flavors. Po’boys with grilled shrimp or fried catfish with remoulade, lettuce and tomato on Leidenheimer bread are lunchtime favorites. Entrees like the andouille sausage jambalaya with Creole tomato glaze and seared redfish with garlic grits, green beans and crawfish etouffee sauce also keep the folks coming back time and time again, as does the insanely addictive bread pudding with spiced rum sauce. 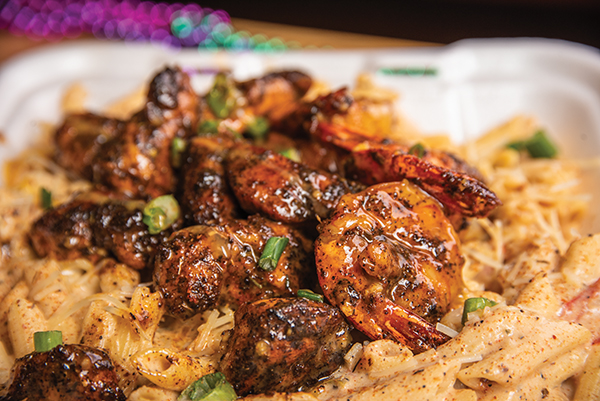 Joining these established restaurants are two relatively new kids on the block, North Little Rock’s Mr. Cajun’s Kitchen & Catering and area food truck The Cajun Trouxth. I am planning to dive into more of the menu at Mr. Cajun’s beyond the fried chicken tenders from my one visit. At The Cajun Trouxth (pronounced truth, a roux is added to the traditional spelling), the Down & Dirty is an absolute hit, somehow seamlessly combining three dishes into one with its hearty portion of dirty rice topped with a golden fried catfish, then smothered in shrimp etouffee. The warm, friendly service is just as good.

“The Cajun Trouxth has been in business since August 2020,” says owner Charles Gilmer. “My catering business, Martha’s Bon Appetit LLC, is where I started cooking Cajun dishes. When the demand grew, I figured it was time to give the food truck a try. Our most popular dishes are the Down & Dirty, Chicken and Sausage Gumbo, and the Jambalaya egg rolls.” 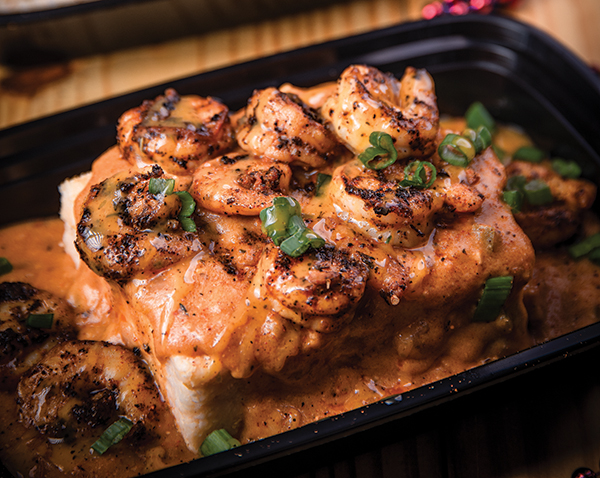 Just a short, 30-minute drive from Little Rock in Conway is YGFBFKitchen, the former food truck that has transitioned to a brick-and-mortar restaurant over the past year with a prime, downtown location. Chef and owner MaryAnn Strange’s creative takes on Cajun dishes have helped vault YGFBFKitchen’s popularity in a relatively short period of time. Her irresistible shrimp and grits, among other entrees, is a must-order.

“Our shrimp and grits allow each element of the dish, from the creamy cheesy grits to the spicy gravy to the blackened seasoned shrimp in our homemade tomato compote, to be present but also pair together so well,” she says. “It is a burst of Cajun flavors in your mouth.”

In fact, shrimp and grits, a dish that often marries Southern and Cajun cuisines, is found on brunch, lunch, and dinner menus all over Central Arkansas. South on Main does a “Tuesday Shrimp and Grits,” and the entrée is served up at restaurants like Capers, Table 28, Red Door, Lazy Pete’s Fish and Shrimp and Copper Mule Table & Tap, the latter of which is a new restaurant in Bryant. While the menu at Copper Mule is technically a Southern concept, it has a Cajun and Creole lean. Voodoo Pasta, red beans and rice, shrimp and grits, gumbo, and even a white chocolate bread pudding make sure of that. For executive chef Mindy Mitchell, a Louisiana native, being at Copper Mule gave her an opportunity to bring a cuisine she loves to an area in need of it.

“Authentic Cajun and Creole cooking is very hard to find outside of the Greater New Orleans area, so when given the opportunity to create a Southern-style menu, it was a no brainer for me,” she says. “And as a bonus, I get to bring something new and unique to the Saline County community and food scene.”

The Oyster Bar, while not new, did recently receive a complete revamp to the restaurant. Menu changes, including an unparalleled selection of fresh oysters to go along with Cajun and Creole classics like fried alligator po’boys, shrimp Creole and wood-grilled oysters are a welcome sight.

Even restaurants that may not technically be Cajun-focused have embraced the popular cuisine with several menu offerings. Petit & Keet has duck gumbo and BBQ shrimp and shiitake leek risotto, while its sister restaurant, Cypress Social, in North Little Rock, serves chargrilled oysters, red beans and rice, redfish Pontchartrain and an alligator sausage roll.

It is a flair shared by so many chefs around the city. Our community’s intense interest in New Orleans, combined with a variety of restaurants providing such stellar dishes, leads me to believe that Central Arkansas’ love for Cajun and Creole food will not be waning anytime soon. And like other folks, I am completely fine with it. 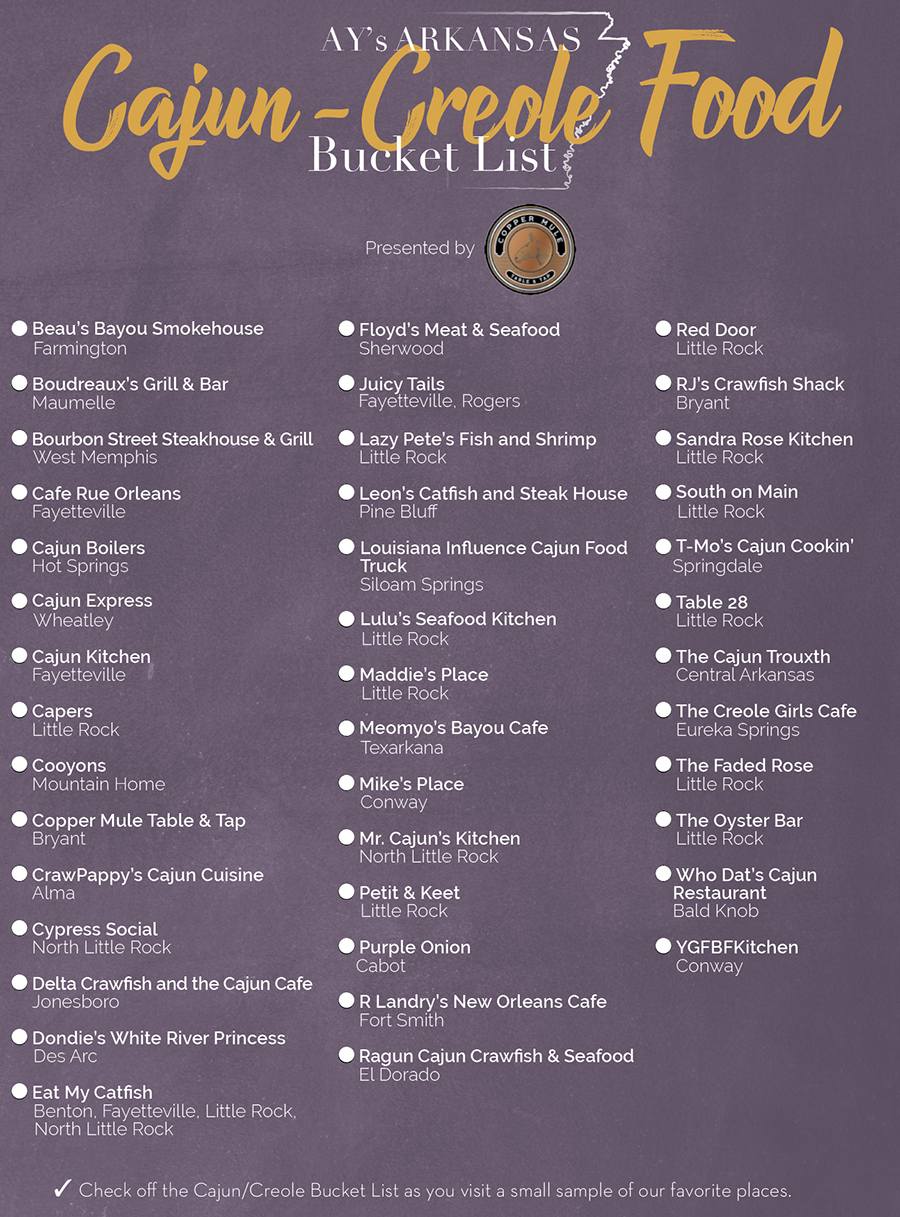