The Oma-Hogs hope to stay alive in the College World Series as they prepare for a matchup against Texas Tech on Monday. The fifth-seed Razorbacks will vie against the eight-seed Red Raiders in the first elimination game of the week. The game will be played at TD Ameritrade Park at 1 p.m. CST, and will be broadcast on ESPN.

The Razorbacks’ post-season momentum was stymied by Florida State on Saturday, as the Hogs fell 1-0 to the Seminoles in their first game at the College World Series. The Hogs’ ace Isaiah Campbell and FSU’s lefty Drew Parrish had a pitching duel for the ages, as both starters held the other team scoreless through eight innings. Unfortunately for the Razorbacks, the Seminoles were able to score a run in the ninth inning, which the Hogs could not answer.

The stakes are as simple as they come on Monday: win and stay in; lose and go home.

UA coach Dave Van Horn has announced that Connor Noland (3-5) will get the start for the Hogs on Monday. The last we saw Noland, he was pulled after just one inning against Ole Miss in the Super Regional, having allowed four runs and two home runs.

“[Noland has] had a pattern where if he doesn’t have a good start, he comes back with another one that’s pretty good right after it,” Van Horn said yesterday. “Hopefully that’ll continue.”

The Red Raiders are expected to start either Caleb Kilian (8-3) or Bryce Bonnin (6-1), the latter of whom transferred to Texas Tech after pitching for Arkansas last year.

Should the Hogs defeat the Red Raiders of Lubbock, they will advance to the next elimination game against the loser of the Michigan vs. Florida State matchup, which is being played on June 17, at 6 pm.

The Razorbacks will need to win at least four games in a row if they wish to advance to the Finals again this year.

See the full bracket with updated results below: 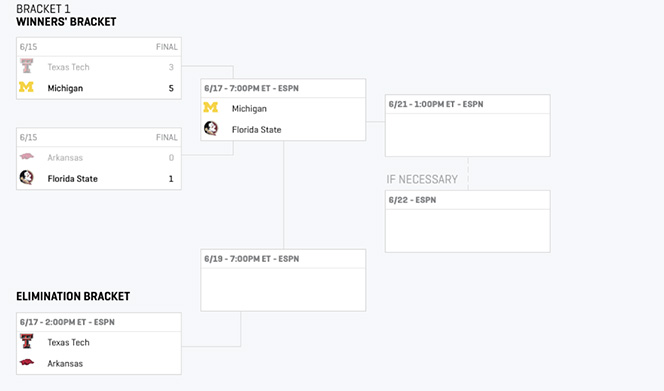 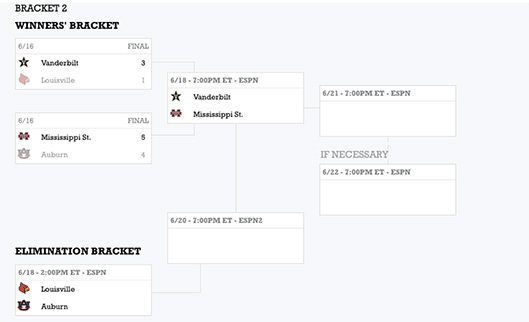