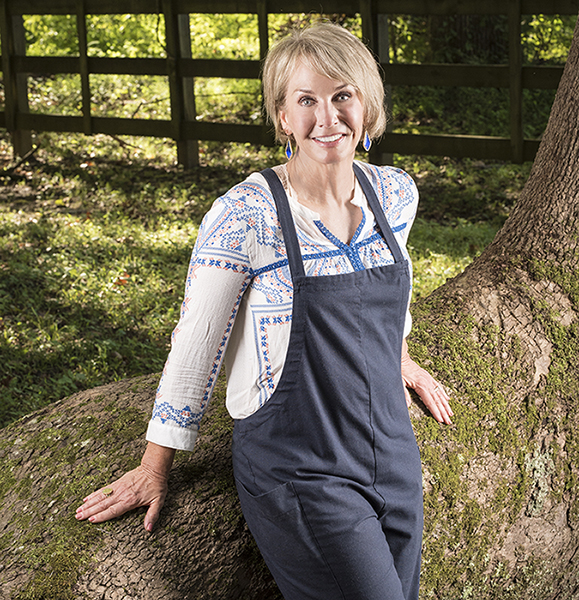 By Dwain Hebda | Photography by Jamison Mosley
The first time cancer came for Susie Everett, she was frightened. The second time, she got mad.
“I’ve realized this: If I’m threatened, and there’s either fight or flight, well, I’m going to fight,” she says, steely eyes flashing. “I promise you.”
Everett did fight. And more than that, she laid a beating on breast cancer. Like the school bookworm who finally got pushed too far by a playground bully, she raged against the disease, hitting it with everything that she and the medical community had. Seventeen years later, cancer still has yet to meddle with her again.
“I knew I wasn’t going to die,” she says. “Even when I faced going in for surgery with the reconstruction and the double mastectomy, I did it all at once. My faith in Christ is a big deal, and it gave me that, ‘Hey, you’re not going to die and I’m not going to leave you or forsake you.’”
She shrugs.
“So, I just knew.”
Most people probably recognize Susie Everett best from her television commercials for the auto dealerships she owns with her husband Dwight. But many others know her for standing toe-to-toe with breast cancer and her charity work to support efforts to bring mammograms and other health and wellness options within reach of women who might not otherwise have it.
To that end, she’s given speeches, talked in schools, raised and donated money and helped open Christian Community Care Clinic, a Benton medical facility targeting people who can’t afford health insurance. Even today, despite the demands of a growing business and family, the former nurse still finds time to volunteer for the cause. At this summer’s Amplify Christian music concert in Benton, she was manning a counseling tent when a woman came in and asked to pray with her.
RELATED: Breast Cancer in Arkansas
“She’d been living with some abnormality on her breast for a year,” says Everett. “I don’t think she felt like she could afford to go to the doctor, and she didn’t really know there’s places she can go, even though we try to get that message out.”
Everett’s fingers click sharply on the table as she talks, the incredulity rising in her voice over how the greatest nation on earth can allow even one woman to live in the kind of fear and misinformation that could cost her life.
“People aren’t being educated [about health] and there are hurdles,” she says. “People will still just worry about it and won’t take care of themselves. Maybe they’re too scared. Maybe there’s so much else going on in their life they don’t have enough energy to pursue their health.”
Born Susie Brumley in Tulsa, Everett moved with her family to Saline County, at age 10. After graduating high school, she met Dwight Everett, a Henderson University student five years her senior who she thought would make a fun summertime companion. Turns out she was more right than she knew, as that summertime romance turned into a love affair that will observe 41 years of marriage this year.
Susie and Dwight welcomed two daughters along the way and between her family, her work as a nurse and her faith, life couldn’t have been any better. But that life was about to be turned upside down when, in 1997, she discovered a mass in her breast no bigger than the tip of her fingernail.
“I remember I was not expecting the diagnosis, and I was young enough that I had to go get an ultrasound,” she says. “The mammogram really wasn’t clear enough the first time. So, she’s in there, she’s doing that ultrasound, and she said, ‘Well, you’re going to need to talk to a breast surgeon.’ And I remember I just started crying and said, ‘I don’t know a breast surgeon!’ But anyway, they found me one.”
Everett underwent a lumpectomy and six weeks of radiation treatment, about 30 sessions in all, which she tolerated fairly well. She then began a regimen of follow-up appointments with the goal of making it to the all-clear mark of five years with no new problems. She made it four.
“First of all, I was mad at my body,” says Everett, a fitness nut who only recently gave up CrossFit at age 60. “I felt like I was betrayed. I mean once, I could take it. The second time I was aggravated with my body.
“I never had a ‘why me’ thing because I’ve always thought, ‘Well, why not me?’ I knew I wasn’t a high-risk, but I never thought it should have been somebody else,” she adds. “I mean I don’t like it, I don’t want it, but that’s not how I ever felt.” 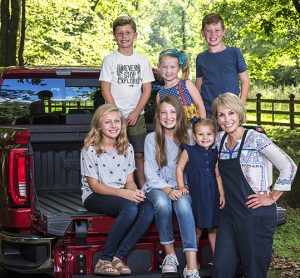 Buoyed by her faith, Everett withstood the surgeries and the savage chemotherapy as her own personal Via Dolorosa. This time, she reached the five-year mark clean of cancer, a milestone she credits to those closest to her.
“I don’t do well with throw-up, and my husband held up that trash can and helped me when I couldn’t make it to the bathroom. He drained those tubes, and he’s not a nurse,” she says. “I had that special friend that always came over and made time. And just sitting on my back porch with my dad, just staying in the sunshine and him being there, just sitting. Those are special things.
“I felt really bad about things sometimes, feeling sorry for myself, and I’d get a phone call and somebody would be there,” Everett adds. “It was like God saying, ‘I still got it! We’re going to get through it.’ I remember things like that.”
With 17 cancer-free years under her belt, Everett is less anxious about checkups but no less vigilant about her health and that of her daughters, now with families of their own. She doesn’t obsess over the fact that, unlike during her upbringing, they now live with a familial history of breast cancer. But she doesn’t let them forget it, either.
RELATED: 2016’s Powerful Women
“As I was going through [treatment], I did let them know they’re at higher risk now,” she says. “I told them, like I’d tell anyone, to know if there’s a difference in your breast, because that’s how I found mine. It was early detection because of breast self-exam. I told them they had to be aware.”
Sometime after her first diagnosis and treatment, Everett was asked to participate in Runway for the Cure, a fashion show founded by AY where the models are all survivors and the proceeds go to support breast cancer research. She’s walking the runway this year, too. The event is fun, of course, but the interactions she has with other women, all cut from the same warrior cloth as she, are what’s really meaningful especially as time and experience continue to refine her perspective on life.
“[Cancer] makes me more thankful, thankful for my health that I have now,” she says. “It’s given me more compassion for people that are going through that. I really appreciate the deeper walk I have in my faith because of this journey. The things you go through just make you stronger for what you may be facing in the future. There’s a reason you travel that road.”
RELATED: Genetic Testing: Preventing Cancer Before it Develops