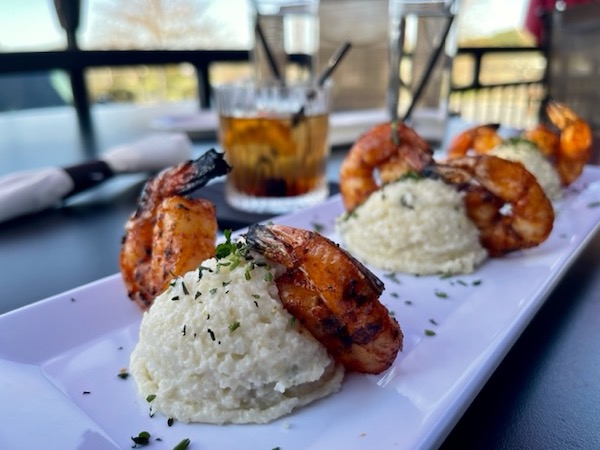 The weekend returned patio weather to its proper spot in April, so we headed west to Red Moon Tavern, one of our New in Town Bucket List restaurants. The tavern opened in the former NYPD Pizza space at Hwy. 10 and Chenonceau Boulevard in October 2020. A bold time to open a new restaurant venture, but it’s worked out well.

Red Moon’s patio is a comfortable stretch of red-umbrellaed tables and seating areas overlooking the parking lot and the highway beyond. Inside, the tavern is dark and cool, a shadowy palette of charcoal, stained wood grain along the bar and the deep red found in the eatery’s name and logo.

On our Saturday visit for an early dinner, the temperature was in the 70s and conditions were just right for the full patio experience (and the better light it offered for pictures). Seated at a tall table in actually comfortable tall swivel chairs, we delved into the menu. 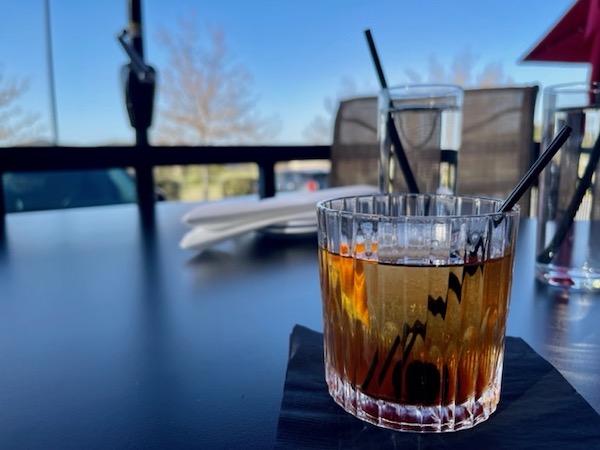 Perhaps my favorite part of the meal was the first thing brought to the table, my Pecan Old-Fashioned, one of the signature drinks on the Red Moon cocktail menu. Just a simple cocktail of whiskey, pecan syrup, black walnut bitters, an orange peel and what seemed to be a luxardo cherry (I cannot confirm that it was because my opportunistic companion ate it when I was not paying attention). But the drink tasted like an issue of Southern Living poured into an old-fashioned glass. Rich with pecan flavor and aroma, the drink is sweet but not cloying; the whiskey provided needed balance, and every flavor was detectable (and delectable). Definitely a sipper, or a perfect post-meal digestif. 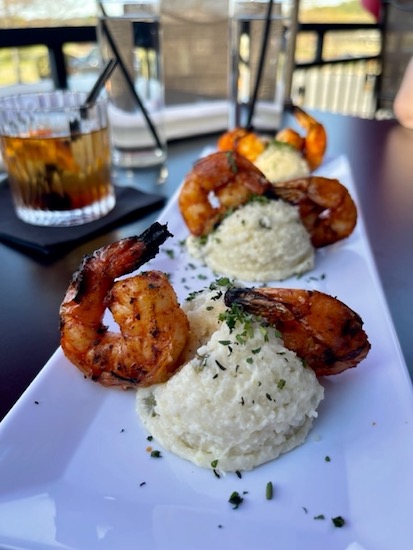 I’m always drawn to shrimp and grits on a menu, but more typically as an entree, not a shareable small plate. I was curious how it would be portioned, and the presentation did not disappoint: three scoops of coarse-ground jalapeno cheese grits on a long platter, each sporting two beautiful grilled shrimp, amply-seasoned. (Truthfully, the shape reminded me a bit of little culinary Viking hats, one of those things you can’t unsee.) The shrimp was savory with a bit of zip, offset by the creamy grits; those had just a mild bit of jalapeno every few bites for a pleasant contrast to the soft cheddar. While shrimp and grits doesn’t appear as an entree, the grits provide the hearty base for the dinner-sized seafood gumbo. Our server said the shrimp and grits was one of the most popular items on the menu. I’d definitely order it again.

Crawfish mac and cheese makes another popular side or appetizer. My companion ordered the blackened chicken entree, which comes with the crawfish mac and cheese and a grilled corn salad. The mac and cheese is really shells and cheese, not macaroni, but it’s understandable that the dish name is not Crawfish Shells & Cheese, because that string of words sounds far less enticing. And it was delicious. 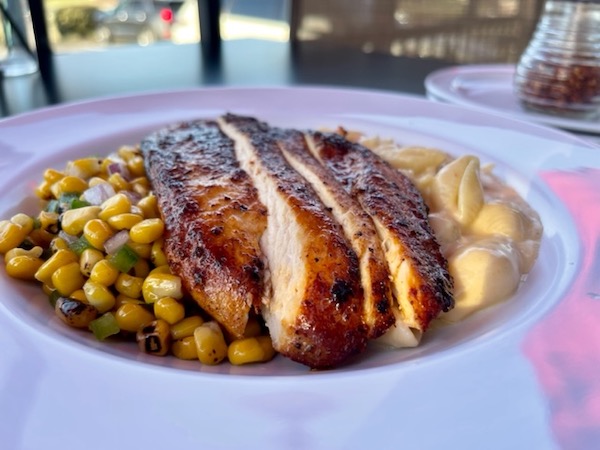 My companion enjoyed the blackened chicken breast, which had a kick without overwhelming the juicy chicken with spice. And the grilled corn salad, full of red onion and green pepper, provided a contrasting texture to the cheesy pasta on the opposite side of the plate.

Finally, we tried the 14” Quattro Formaggi pizza, because the pizzas occupy almost half of the menu, and because I’m a big fan of blending cheeses together and melting them on any manner of bread. The crust was hand-shaped and sturdy, while allowing for the slice to be folded up New York style if that’s your thing. It was unapologetically greasy, for better or worse, and the combination of four melty cheesy flavors pleased our palates. 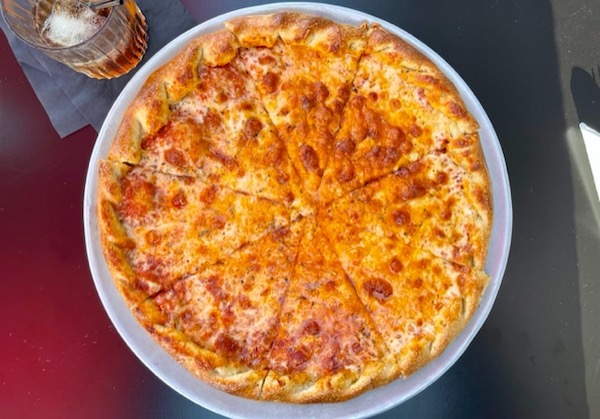 Other specialty pizzas Red Moon serves are relatively familiar — there’s a Southwestern, a veggie, a barbecue, a margarita, among others. The only one that raised our eyebrows was the just-gonna-go-for-it Real Big Dill with Bacon, a pie topped with, yes, bacon and dill pickles on a garlic-butter base, topped with fresh dill. Be sure to let your friends among the bacon-and-dill-pickle crowds know.