[dropcap]M[/dropcap]any Arkansans already know that the Natural State is a good place to work and raise a family. And many are also finding that it is a good place to retire to. Arkansas’ abundance of outdoor recreational activities, generally mild climate and relatively low cost of living compared to many states, attract people looking for affordable options on fixed incomes.

Karl, 63, and Kelly Trahan, 53, found their perfect spot on Holiday Island on Table Rock Lake in Northwest Arkansas. The community of about 1,500 families is just six miles from Eureka Springs, an hour from Branson and 45 minutes from Rogers.

Through careful planning and frugal living, the Trahans were able to retire 10 years ago when Kelly was 43 and Karl was 53. Karl, a native of South Louisiana, and Kelly, of Texas, were both career U.S. Air Force employees. They had originally planned to stay in Texas where Kelly was working as a recruiting supervisor. The couple, married for 32 years, discovered Holiday Island in 2004, when friends invited them to visit.

“We fell in love with the place. It was pretty and had all the golf a person could want,” Kelly recalled. “It’s cheap to live here too. We knew that we could move here and retire completely on two military retirements. We went back and bought land three years before I retired.” 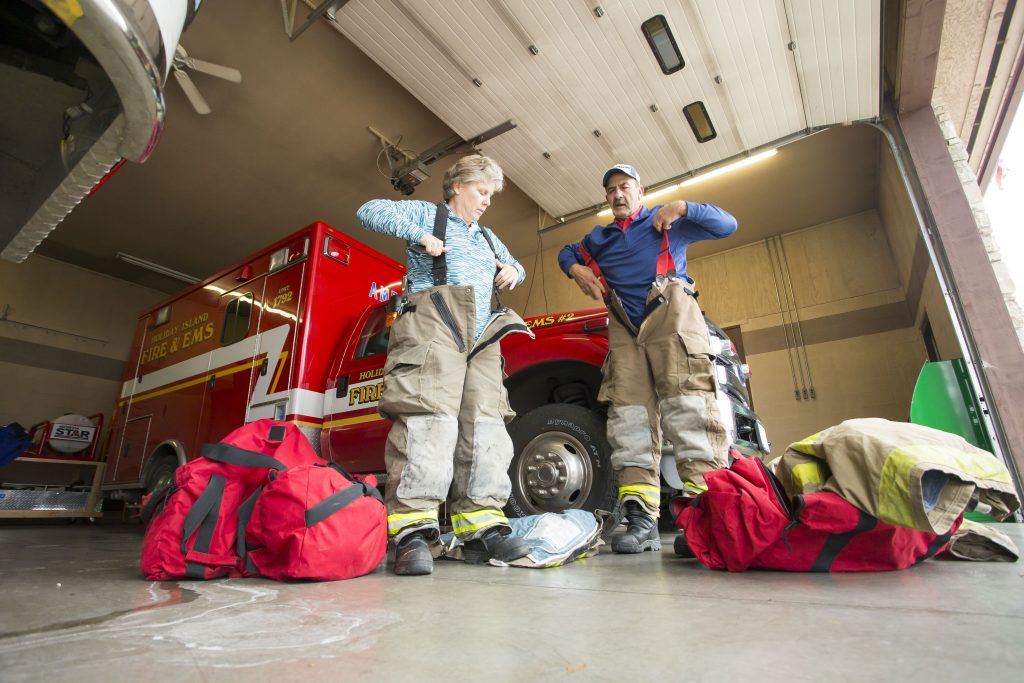 The Trahans are fully involved with their community, volunteering time with the Holiday Island Fire Department. The couple’s biggest perk of retirement is feeding their golf addiction. Travel elsewhere has been minimal since they’re on the golf course playing up to 250 rounds annually.

Their secret for being able to retire so young was working, planning and saving money. When Karl retired as an air traffic controller from the Air Force in 1993, he began a second career as a dispatcher for Bombardier which enabled him to save years of his military pay until Kelly was ready to retire in 2007.

“We are fairly frugal people anyway,” Kelly says. “We always owned a house. We knew we didn’t want to have to work the rest of our lives, so we did what we had to do to make it happen.”

These days, the couple live healthy and active lifestyles. They play lots of golf — up to 250 rounds a year. (Kelly was the #1 ranked women’s golfer in the military in North America in 1997.) Every August, she organizes a golf tournament for Komen Ozark, and Karl cooks 100 pounds of meat for a barbeque dinner the night before the tournament.

They enjoy playing in charity tournaments and are active in Holiday Island’s golf leagues; Karl served as vice president of the men’s golf league for three years, and Kelly was treasurer for the ladies league. When the golf courses needed a new deck, Karl and other volunteers built one.

Aside from two golf courses, Holiday Island has its own art and quilting guilds, a choir, a theater group, and a recreation center with pools, tennis, a softball field, horseshoes and pickleball — plenty to keep residents busy. 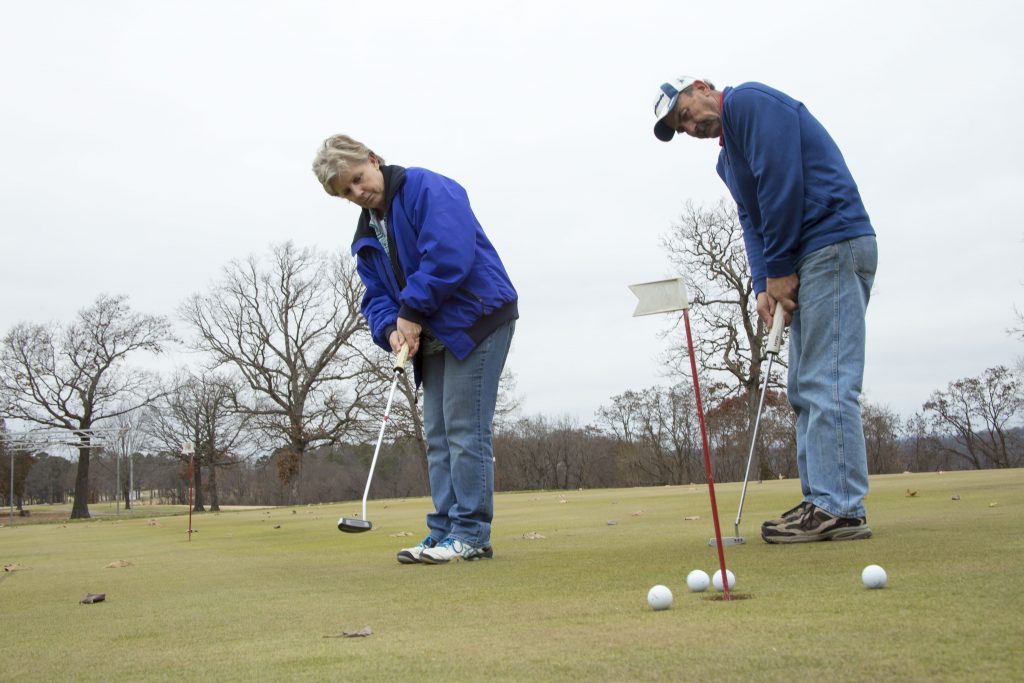 The couple’s biggest perk of retirement is feeding their golf addiction. Travel elsewhere has been minimal since they’re on the golf course playing up to 250 rounds annually.

“It’s a very close-knit community,” said Linda Graves, a commissioner for Holiday Island’s suburban improvement district, who moved to Holiday Island from Chicago 13 years ago. “If you want to get involved, it’s easy to meet people and be involved.”

Graves says the retirement community attracts people from other parts of Arkansas and surrounding states, but mainly draws people from Iowa, Nebraska and Wisconsin, who want a warmer climate.

That is true for the state’s other retirement communities as well. Most retirees moving to the Natural State come from surrounding states, the Midwest and California, according to Wayne Miller, a professor of Community and Economic Development with the University of Arkansas System Division of Agriculture.

About 16 percent of Arkansas’ population of is residents 65 and older — about 2 percent higher than the national average.

“For the first five years, we sat back and enjoyed retirement, but we felt there was more to do around the community,” Karl Trahan said.

Since 2012, the couple has volunteered with the Holiday Island Fire Department. Karl is a pump operator and Kelly and their daughter, Nikki, 31, are both emergency medical technicians. The department received about 500 calls in 2016, including 350 medical calls. 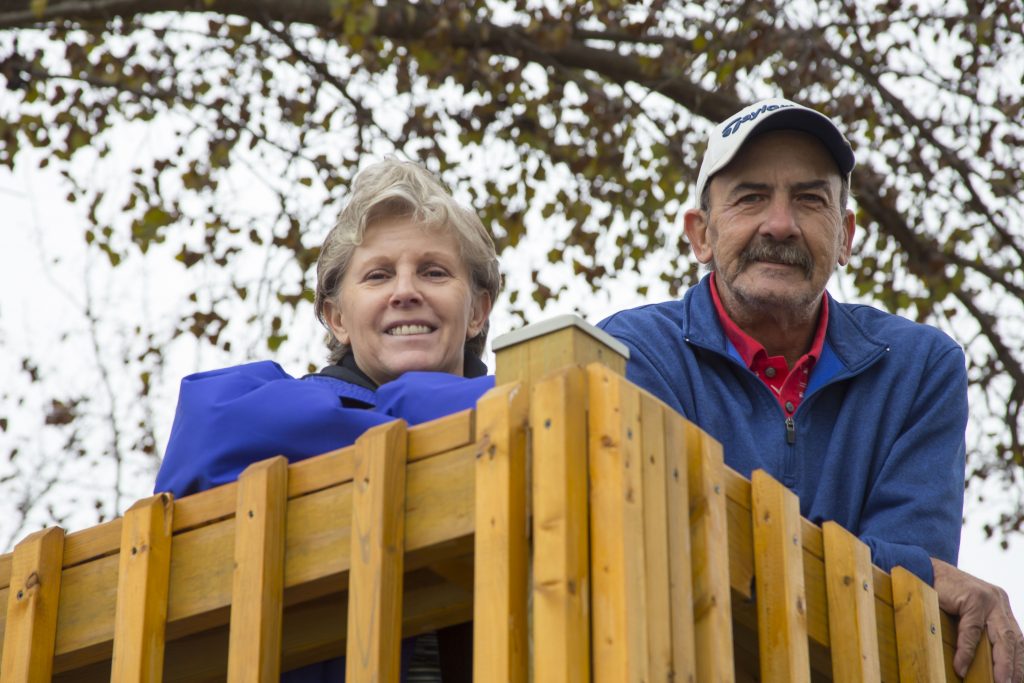 A visit to friends at Holiday Island more than a dozen years ago caused the Trahans to fall in love with the area. Thoughtful and frugal financial planning enabled the retired military couple to retire when Kelly and Karl were 43 and 53 years old, respectively.

“Every day we usually get one to two calls. It may be nothing more than a fire alarm or an accident where we work traffic or give medical assistance,” Kelly said. “We absolutely love it. It’s a small community, and you need people who are willing to do this and give back. Everyone who moves here gets involved.”

The couple hasn’t traveled as much as they expected, but that’s “because we’re surrounded by 27 holes of golf!” Kelly said.

They’ve visited Mexico and Las Vegas, traveled to Louisiana and Texas to visit family, and have taken a few spur-of-the-moment trips. One day, they decided to drive to Memphis to get fried chicken at Lou’s, which was featured on Food Network’s “Diners, Drive-Ins and Dives.”

“It was so good,” Kelly said. ” It was worth the seven-hour drive.”