Photo courtesy of the National Archives and Records Administration

[pullquote]Above Photo: People were tagged with their identification number and the relocation center to which they were being sent.[/pullquote] [dropcap]The[/dropcap] tiny Desha County community of Rohwer sits alongside Arkansas Highway 1 amid the lush green farmland and murky swamps of the Mississippi River Delta.

Traveling in southeast Arkansas this time of the year, you might stop for a spell and observe the aerobatics of the crop dusters, listen to a red-winged blackbird perched on a cattail, and maybe toss a rock into the coffee-colored waters of Boggy Bayou. Given these surroundings, it’s hard to imagine that 70 years ago Rohwer was the site of an internment camp for thousands of Japanese-Americans who were forced from their West Coast homes after the Dec. 7, 1941, bombing of Pearl Harbor. It was one of 10 such camps in the nation’s interior.

Between September 1942 and November 1945, some 8,000 people lived in military-style, tarpaper barracks at the 500-acre camp; a similar number were interned in a camp at Jerome (Drew County).

Though little remains of the Rohwer Japanese American Relocation Center — a cemetery and a smokestack — much has been done to show visitors what life was like for the internees and to save the place for future generations.

Interpretive signage depicts what the camp looked like. Buildings included a school auditorium and library, a sawmill, a cannery and a post office. Surrounding those buildings was barbed wire that marked the boundaries of the internees’ daily lives, plus the military police headquarters and the guard towers that ensured the internees stayed within those boundaries. A replica of a guard tower stands at the start of a self-guided walking tour along the site’s south end.

The tour leads to the cemetery, where two large monuments of poured concrete provide poignant testaments. Each was dedicated in 1945. One, an obelisk topped by a globe and an eagle, commemorates those who died while interned at the camp. The other, its base shaped like a tank, topped by a large tablet and star, honors the young men who left the camp to fight in the war: members of the U.S. Army’s 100th Battalion and the 442nd Regimental Combat Team. Names of those who died in combat are inscribed on the monument.

For an additional look at camp life, visitors can drive to McGehee, about 12 miles down Highway 1, and view exhibits at the World War II Japanese American Internment Museum, also known as the Jerome-Rohwer Interpretive Museum and Visitors Center. It’s housed in a former train station at 100 S. Railroad Street.

Two people who have played major roles in preserving this part of U.S. history are Dr. Ruth Hawkins, director of Arkansas Heritage Sites at Arkansas State University (ASU) at Jonesboro, and Dr. Johanna Miller Lewis, a history professor at the University of Arkansas at Little Rock.

Hawkins and Lewis discussed via email the site’s importance and preservation efforts.

“Rohwer is important,” Hawkins stated, “in that it serves as a tangible reminder of what can happen when an entire nation reacts out of fear and hysteria. American citizens of Japanese descent were rounded up and incarcerated just because they happened to look like the people who bombed Pearl Harbor. This was a dark chapter in our history, and the lessons learned from Rohwer and the nine other similar camps around the country hopefully will help to ensure that this never happens again. These were not Japanese prisoners of war. They were American citizens who had committed no crimes, yet were denied their freedom.”

Lewis recalled: “The first time I visited the cemetery it was an overcast fall day. When I entered the cemetery space and looked around, my emotions took control of me. I couldn’t fathom any government, let alone the U.S. government, doing something like this to its citizens and their families. Then I turned to examine the obelisk and saw this quote: ‘May the people of Arkansas keep in beauty and reverence forever this ground where our bodies sleep.’ We, the people of Arkansas, obviously were not doing that; the monuments had been badly vandalized. I made a promise to myself that day to restore the cemetery and honor the wish the Japanese Americans carved on the monument.” 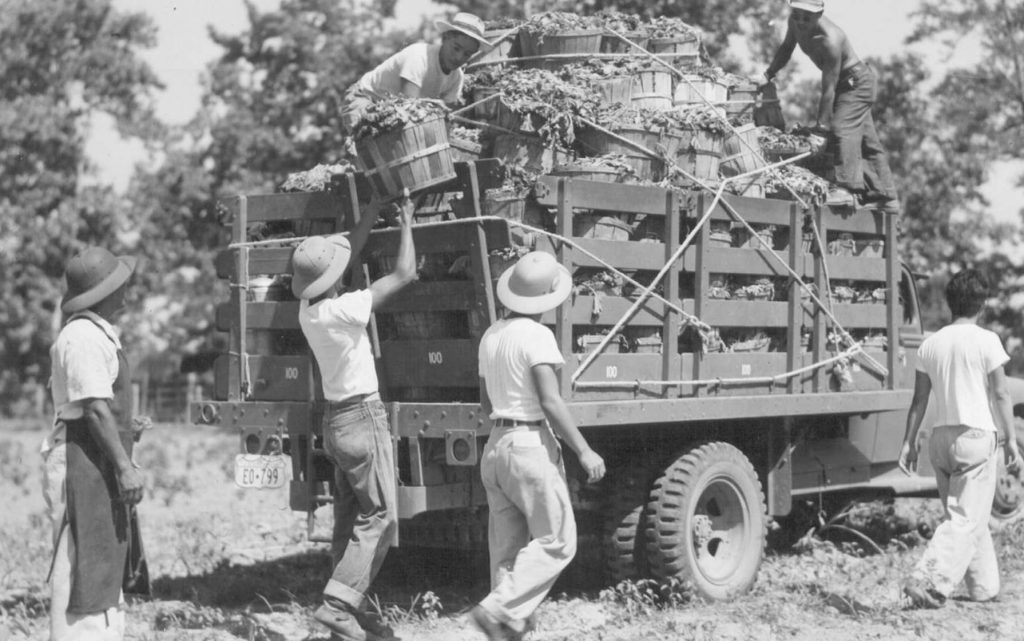 One of many truckloads of mustard harvested by the residents of the Rohwer Relocation Center on the land cultivated by the evacuees. Photographed by Mace, Charles E. — McGehee, Arkansas. 7/1943.

The monuments have been beautifully refurbished as the first phase of projects to restore the cemetery. Among other work Hawkins noted are a University of Arkansas at Fayetteville site survey and efforts to develop a comprehensive digital database of records related to the camp; ASU’s development of the interpretive signage at the site and cooperation with the McGehee museum to maintain a companion website; and an ASU faculty member’s oral history project that involves interviewing people who lived in the camp.

Hawkins added that the McGehee museum and the Butler Center for Arkansas Studies in Little Rock “have done a great deal to ensure that this story reaches broad audiences. We are honored to be working with so many others and playing a part in keeping this story alive.”

Speaking of interpretive signage, audio panels at the Rohwer site are narrated by a well-known actor who spent part of his childhood at the camp.

When you visit the site of the former internment camp at Rohwer Japanese American Internment Center, you’ll find interpretive signage with audio recordings from a former internee, who just happened to become a famous actor: George Takei, best known for his role as Mr. Sulu in the “Star Trek” television and movie series.

Takei’s rich, deep voice provides narration at interpretive kiosks at the site. He begins describing the dramatic change in his young life this way:

“My father told me that we were going on a long vacation to a place called Arkansas. That sounded exotic to me. We were put on a train with other Japanese Americans, and it was a grueling, long, long trip. We arrived in Rohwer after three days and two nights on the train, sitting day and night on hard, wooden seats. It was late summer and the sunlight glinted off each barb on the wire, flashing like sharp, deadly gems strung out along the new fence. We passed tall guard towers with armed soldiers staring down at us.”

To hear Takei’s roughly 3-minute introduction, visit rohwer.astate.edu and take the virtual tour. The site also provides an array of other information related to the Japanese Americans’ relocation and detainment, including the audio and transcript of a speech Takei gave at Rohwer on April 13, 2013.

As part of his talk, he paid homage to the men of the 442nd Regimental Combat Team, who successfully cracked a seemingly impregnable Nazi line of defense in Italy known as the Gothic Line.

He concluded his remarks by saying: “I was here very briefly, just about a year, but my heart and my Americanism lies here. And I thank you all for what you’ve done to make this an important American landmark. Thank you from the bottom of my heart.”