LITTLE ROCK – Transformational changes are coming to the Arkansas Arts Center, Executive Director Todd Herman announced Tuesday. Alongside architect Jeanne Gang of Studio Gang and landscape architect Kate Orff of SCAPE, Herman presented a striking architectural design that strengthens the connections between the visual and performing arts in an inclusive space that welcomes a diverse community.
“This an exciting moment for the Arkansas Arts Center, central Arkansas, and the entire state,” Herman said. “The reimagined Arts Center will be a welcoming place that encourages prolonged and meaningful interaction with the collection and programs at the Arts Center. It is intended to be a gathering place for the community that highlights the interplay between the AAC and the surrounding park.”
The Arkansas Arts Center welcomes more than 200,000 visitors annually to its facility in historic MacArthur Park. Roughly 40,000 children and families and over 200 schools from across the state use the Children’s Theatre each year.
“The AAC is well-loved and has been well-used,” Herman said. “The building has held up well, but this renovation and expansion is needed for the Arts Center to be the kind of community resource that meets the changing expectations of our visitors, our growing world-class art collection and art school, and to continue offering groundbreaking educational programs to a diverse community.” 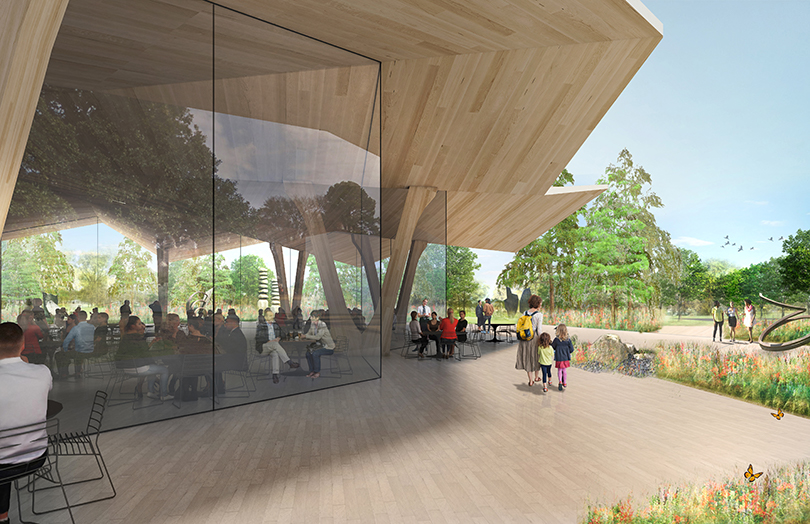 The Arkansas Arts Center concept design features 127,000 square feet of renovated and new spaces. New areas include a versatile indoor/outdoor restaurant overlooking MacArthur Park, a new north entrance reveals the original 1937 Museum of Fine Arts façade, a second floor of galleries, expanded art studios and art school gallery, a new drawing research center and conservation lab, a dedicated black box theater, and expanded education spaces, including a family art adventure space. A flexible Cultural Living Room can serve as an extension of the galleries, event space, or community gathering space with bar and lounge seating enjoying a view north across downtown Little Rock.
The design will increase visitor services by 81 percent, exhibitions and collections management by 25 percent and education, public programs and the Museum School by 50 percent.
“Because the Arkansas Arts Center is made up of eight additions to the 1937 Museum of Fine Arts, it’s a very complicated puzzle,” Herman said. “We have the right architects and the right landscape architects to transform our institution into a destination for arts education and a hub that connects the programs of the AAC with newly designed outdoor spaces.”
The concept design developed by Studio Gang lends a new, highly visible architectural identity to the Arts Center. Reorganizing and ordering the current program and architectural envelope, Studio Gang has designed a pleated, organic architecture that connects the new north-facing city entrance with the new glass pavilion and south-facing park entrance to create an open axis public gallery through the building, connecting the program components of the AAC.

“Starting from the inside out, the design clarifies the organization of the building and extends its presence into MacArthur Park and out to Crescent Lawn,” said Gang. “By doing so, the Center becomes a vibrant place for social interaction, education, and appreciation for the arts.”
Throughout the project, sustainable practices are being applied in both the materials and mechanical systems of the building and the landscape elements featuring native plants and rainwater reclamation.
The Arts Center’s transformation will also extend to MacArthur Park, bringing new outdoor amenities to the park. Herman and Orff presented a vision of the Arkansas Arts Center as a “museum within the forest.” Drawing inspiration from Little Rock’s unique regional ecologies – including the banks of Fourche Creek, the bluffs of Emerald Park, and the agrarian landscapes of the Mississippi Delta – the landscape design features inviting outdoor spaces that contribute to AAC’s emerging role as a cultural beacon for Arkansas.
New public plazas and gardens at the north and south entrances of the Arts Center will foster deeper connections with the park. Planted groves along the west side of the building will create a forested edge that blends into the park. A framework of new trees will, over time, merge with the existing canopy to form a park forest. 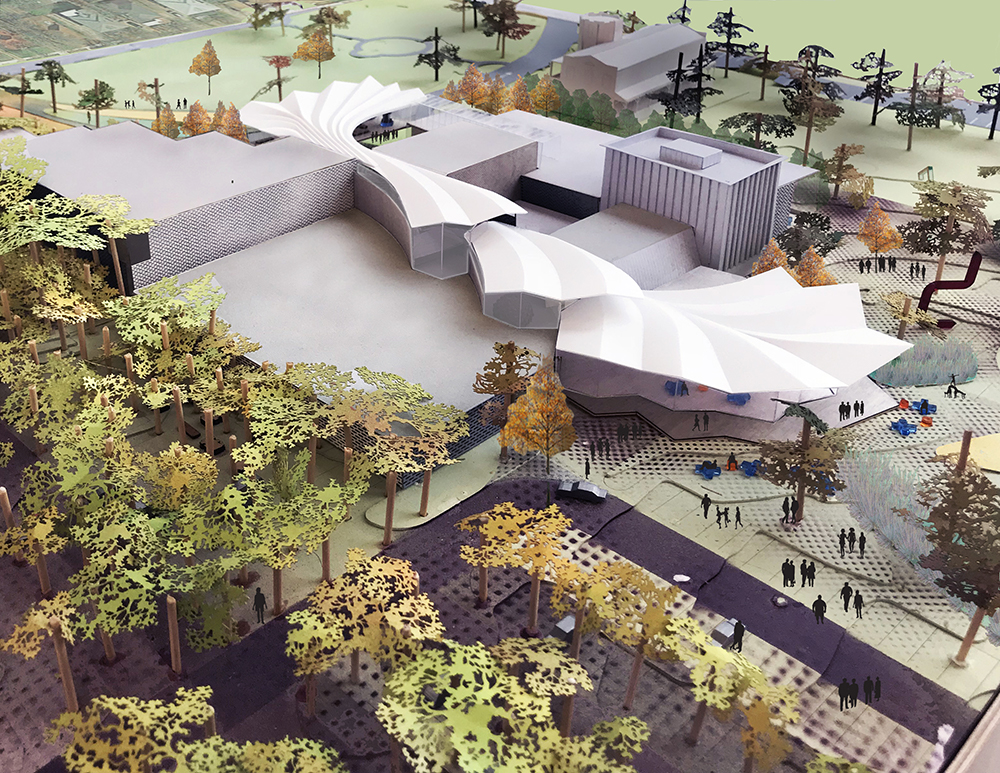 “The site design will rejuvenate and expand the connection between the AAC to MacArthur Park, welcome and orient the Little Rock community to the grounds and weave native regional landscape forms into the existing park,” Orff said.
The construction budget is $70 million coming from a combination of public and private funds, with groundbreaking scheduled for fall 2019. The project is anticipated to be completed in early 2022. During construction, the Arts Center is working with arts partners to provide programming in locations throughout the city. The “Arts Center Outside the Box” idea will allow staff to explore new programs in new spaces while still offering some of its favorite programs.
“In addition to adding to the quality of life and increasing educational opportunities in our community, arts institutions add to the economic vitality of a city,” Herman said. “More people visited art museums in the United States last year than attended every NFL and NBA game combined. In two recent studies conducted by the American Alliance of Museums, data shows that museums contribute $50 billion to the U.S. economy and generate more than $12 billion a year in tax revenue. We expect that this project will set Little Rock apart from similar sized cities and be an essential partner in building our economic future.”
In February 2016, Little Rock residents voted in favor of bonding the revenue from a 2 percent tax on lodging paid primarily by out of town visitors for the benefit of the Arkansas Arts Center, the MacArthur Museum of Arkansas Military History and Historic MacArthur Park. The Arkansas Arts Center has undergone eight additions since its 1937 opening as the Museum of Fine Arts. Renamed the Arkansas Arts Center in 1960, the organization accepted a renewed mission to serve the entire state. The renovated building will continue to serve the community with the Museum, Museum School, Children’s Theatre and Statewide ArtsReach Programs. The most recent addition to the facility was in 2001. 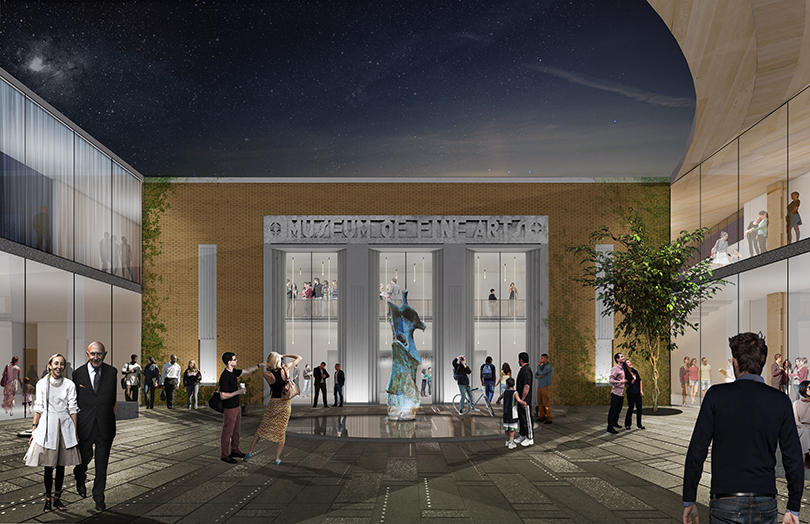 Studio Gang was selected as design architect out of five finalist firms in December 2016 due to their elegant and smart approach to architecture, understanding of the issues posed by the AAC’s current facility, vision for the Arts Center as a cultural beacon for Central Arkansas, and commitment to sustainability and strength as urban planners.
Studio Gang is an architecture and urban design practice based in Chicago, New York, and San Francisco. Founded by Architect and MacArthur Fellow Jeanne Gang and recognized internationally for a design process that foregrounds the relationships between individuals, communities, and environments, Studio Gang produces award-winning work that ranges in scale from the 82-story Aqua Tower to the 14-acre Nature Boardwalk at Lincoln Park Zoo. Recent projects include the new United States Embassy in Brasilia, Brazil; a unified campus for the California College of the Arts in San Francisco, California; and an expansion to the American Museum of Natural History in New York City. Intertwined with its built work, Studio Gang develops research and related projects such as publications, exhibitions, and events that push design’s ability to create public awareness and lead to change – a practice Jeanne calls “actionable idealism.” These include Civic Commons, a multi-city project reimagining public buildings across the United States, and Reverse Effect, an advocacy publication produced to spark a greener future for the Chicago River. This is Studio Gang’s first project in Arkansas.
SCAPE is a design-driven landscape architecture and urban design studio based in New York. They believe landscape architecture can enable positive change in communities through the creation of regenerative living infrastructure and public landscapes. SCAPE works to integrate natural cycles and systems into environments across all scales, from the urban pocket-park to the regional ecological plan. They do this through diverse forms of landscape architecture – built landscapes, planning frameworks, research, books, and installations – with the ultimate goal of connecting people to their immediate environment and creating dynamic and adaptive landscapes of the future.
Little Rock-based Polk Stanley Wilcox Architects was selected as associate architect for the renovation project in February 2017. Polk Stanley Wilcox is working in partnership with Studio Gang Architects on a
reimagined Arkansas Arts Center. Polk Stanley Wilcox has previously worked on a number of local projects, including the William J. Clinton Presidential Library, Heifer International Headquarters, the Arkansas Studies Institute and the recently opened Robinson Center expansion and renovation. The firm also has experience working with clients in a variety of industries and focuses on sustainability and creating buildings that operate on minimal energy usage.
The leadership phase of a capital campaign to maximize the impact of public dollars dedicated to the project is currently underway. Arts Center officials expect to announce fundraising updates later in the year. 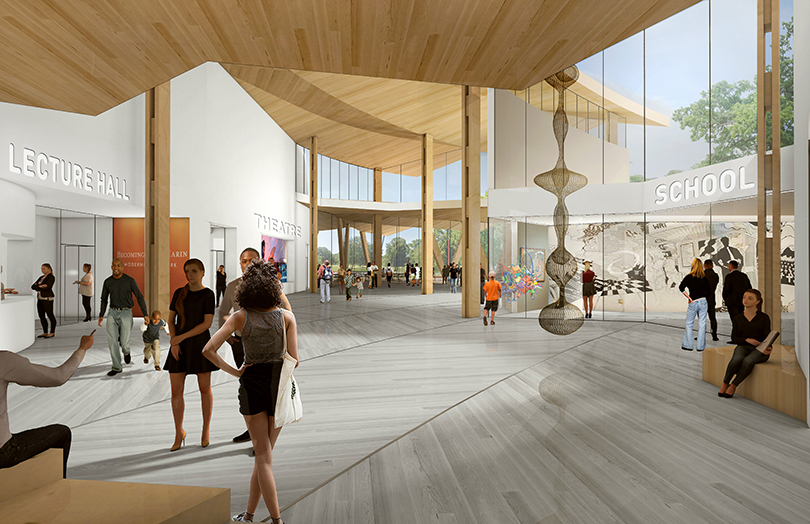 ABOUT THE ARKANSAS ARTS CENTER
The Arkansas Arts Center is the state’s premier center for visual and performing arts, with a renowned collection of international art. The AAC also features the award-winning Children’s Theatre, art classes and public programs. In addition, the AAC offers touring programs for communities, such as Children’s Theatre on Tour, the Artmobile and traveling exhibitions.
Arkansas Arts Center programs are supported in part by: the City of Little Rock; the Little Rock Convention and Visitors Bureau; the City of North Little Rock; and the Arkansas Arts Council, an agency of the Department of Arkansas Heritage and the National Endowment for the Arts.
Photos courtesy of Studio Gang