Renewal Ranch: A Legacy of Healing and Service 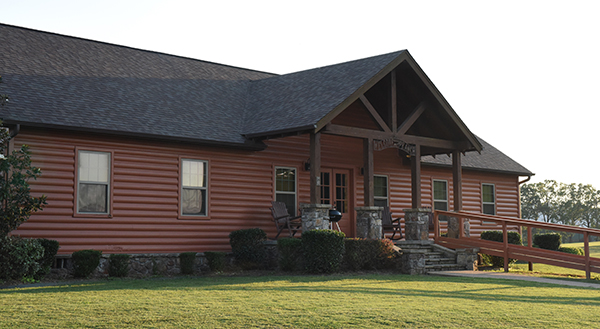 Renewal Ranch: A Legacy of Healing and Service

Ten years ago, in August 2009, an extensive cow pasture just outside Conway was leased by a group of God-fearing men who had big plans for the land. Today, those 116 acres and the buildings across it make up the faith-based residential addiction recovery facility Renewal Ranch.

Founded on the belief that addiction is a spiritually rooted issue, Renewal Ranch provides a 12-month program for men 21 and older that includes counseling, teaching, Bible study, job skills, work opportunities and volunteer service. The dynamic Christian program has had more than 600 participants and more than 60 percent of men accepted into the program successfully graduate after approximately one year. 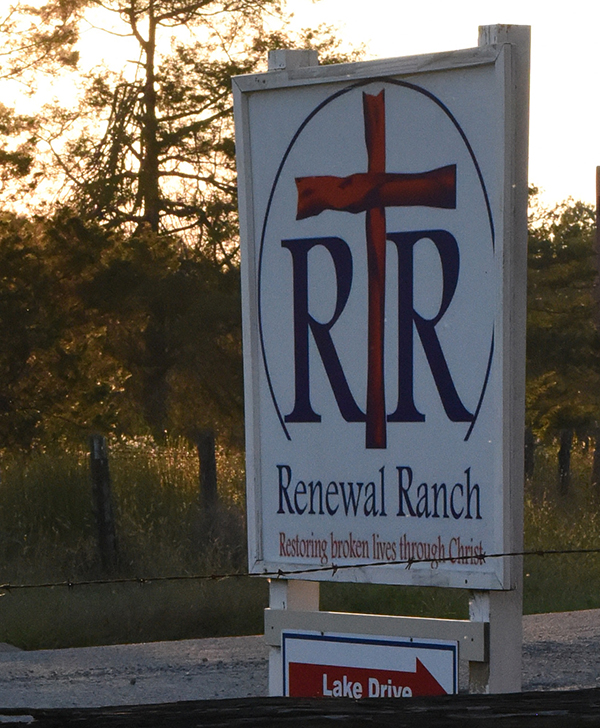 Currently, the program is helping 66 men, but Executive Director James A. Loy, who was among those who acquired that original plot of land in ’09, says “The goal is to be helping 100 men on this campus within 30 years.”

Loy, after decades of fighting his own battle with addiction, found sobriety, built a family, and later answered a divine calling to help other men break their chains to addiction as well.

After only six months of living in an 18-acre newly-remodeled home in Batesville with his wife, he knew it was time to start taking a step of faith toward this God-given dream.

“I wanted to give back at this point, you know. I’d given my life to the Lord,” Loy says. “I was in the shower one morning — and we’d been praying for months — and I just felt like the Lord was calling me to this specific work. He was like, ‘James, every loss, every road you’ve gone down, all your shortcomings, all your failures, every gift I’ve ever given you, I want to now turn them around for your good, and My glory.’

“I got out of the shower, and I went to my wife, a lifelong resident of Batesville, and I said, ‘Honey, I know that this is what God wants us to do. And she said, ‘Let’s go.’ And so we stepped out in faith.”

On Aug. 1, 2009, the Loy family moved into a house on the Conway acreage, which was then owned by Arkansas Sen. Jason Rapert. Through prayer, community and connection, Loy’s family came together with a few others — the future Renewal Ranch Board of Directors — to eventually lease the entire piece of land, come up with a name, apply for the nonprofit and get to work.

The first building on campus opened its doors Jan. 31, 2011, to eight men, and that 3,500-square-foot bunkhouse was the hub of nearly every activity for the first few years. However, eventually accommodating more than 40 guys, who were all trying to prepare food on a residential four-burner stove, became a challenge.

Solutions to these problems and the growth of the program in general led to more facilities. These included a second bunkhouse, a bathhouse, and an auto shop, which is used to maintain all equipment and tractors, as well as give back to the community through providing oil changes and maintenance for other ministries and the Conway Police Department.

“[The shop] was built by our men that were here at the time, and we employ three graduates who work full time in the auto shop. Their shop manager is a retired homicide detective for the Conway Police Department, Tommy Balentine,” Loy says. “We use this as a way to give back to other ministries.”

Community service is an integral part of the participants’ time at Renewal Ranch.

“We are trying to get our men to understand that addiction is the height of self-centeredness, and so each man, when he comes in the program, in the first five months, does 300 hours of community service,” Loy says. “Everything we do is helping them to get out of themselves and follow the example of Christ because Jesus was a servant; He came to serve, not be served.”

Another facility driven by the need for expansion of housing, office space and gathering areas on campus is the newly finished restoration center, which came along in December 2019.

The center also hosts community and fundraising events such as weddings, galas and meetings.

“As we grew, there were four infrastructure needs. We needed bed space, we needed a commercial dining space, we needed a chapel space, and we needed a larger teaching space as we took more men. This is when we built the restoration center,” Loy says. “Since then, we’ve already added on to the front. We added an administrative and counseling wing. We have about 18,000 square feet in this one building.”

This is where it all starts for incoming men. During Phase 1, they live in the housing units attached to the outer perimeter of the restoration center. Three days of the week are devoted to 15 classes taught by pastors and other teachers, and two days are dedicated to giving back by working for others.

“Once they complete their 575 hours of class time and community service — they also have to have scripture memorized, be able to teach a Bible study, and things like that — they move into a transition phase,” Loy says.

In the transition phase, the men are housed in the two bunkhouses and can search for employment while preparing to move back into society.

“Wherever we house men, we have staff that live amongst the men because addiction isn’t something that you manage from afar,” Loy says. “We call them bunkhouse supervisors. They have gone through our program, and God has brought them a little further in their journey, and that’s an entry-level position. We have 27 employees; we’ve grown to that over the years.

“It is that relatability of [participants] being able to spend time with someone who has been right where they’re at in the throes of addiction.”

The last stage of the program before graduation, Phase 2, is designed to help the men walk out their faith. The men work full-time jobs or go to school, live in apartments provided by the ranch and are required to attend at least half of Saturday chapel services. They’re encouraged to attend and serve at other events as well to remain in fellowship with others who care about maintaining sobriety.

“We have 18 apartments over by Hendrix College that we rent from Trent Management. Up on the hill, we’re going to build a $2 million 42-man apartment complex where we’re gonna move the guys that are living [by Hendrix] back onto our campus. We’re raising funds currently for that,” Loy says. “We’ve already raised over a million dollars.”

Directors and staff at Renewal Ranch have strived to maintain a safe and encouraging environment for the men in the program. The ranch itself has one way in, giving it an atmosphere of seclusion and serenity, but is also a short drive from the city of Conway. Each man is also paired with a mentor to help him walk through different aspects of his life. During their free time, the men have the opportunity to partake in fishing at the cove on the property or tend to an open 54 acres of land where the organization often holds dove hunts and plants gardens.

“Every man who comes in, we buy him a Bible with his name engraved on it, and we provide all the curriculum materials, all the workbooks,” Loy says. “Once they come, everything is provided. There’s no cost, because we believe Jesus paid the price. … We want them to be able to just focus on them and a relationship with the Lord to find out what it is to walk in victory; how to live a sober, victorious life and to walk that out.”

Over the course of his 23 years in addiction and 13 rehab stays, Loy learned the detrimental effects of financial and relational stressors while trying to overcome addiction.

“For a person who was a hardcore abuser of substances, and addicted, like myself, outpatient treatment or a little detox was not sufficient to unravel the mess that I had become. … You’re talking about people like me who face spending $50,000 to $85,000 for 30-day or 45-day programs, and they only have a 4 percent chance to turn that around.”

This stress led to Loy trying to pick up the pieces by himself, but he says after trying everything in his own power, what changed his life was “the last place I went and the first place that introduced me to the Lord.”

“Addiction absolutely destroyed everything in my life. As I was going on that dark journey, addiction took me down; it took me to a really dark place. I did things I said I would never do at the first of my addiction. At the end of my addiction, there were no boundaries, there were no ethics, there were no morals. All it was is what it took for me to get high. And as shameful as that is, that’s the truth,” Loy says. “I went to John 3:16 Ministries in 2005, and I was broken — all the homes, all the high-paying jobs, all the accumulated wealth … I had a kitchen trash bag with my clothes in it; that was my luggage. But I gave my life to the Lord. And when I got Jesus, I felt like the richest man in the world because, for the first time, I started experiencing what true love was. For the first time, I had some peace in my life. For the first time, I experienced some joy of the Lord.”

With a more than 60 percent success rate of continued sobriety among participants after one year of graduation, an accepted space at Renewal Ranch is highly coveted.

“We get 10 times the number of applications per man than space we have in a year — that’s people showing up in person with written applications, going through our interview process; that doesn’t count the emails, phone calls, texts of people wanting to apply,” Loy says. “We’ve taken men from Florida, from Michigan, from Pennsylvania, from Oklahoma, Texas, Louisiana, Mississippi, California and Hawaii.”

The main goal of Renewal Ranch leadership and the surrounding community is to continue to see lives changed, chains broken and hearts mended.

“I consider this one of the greatest privileges that has been in my life. And it’s amazing, but it’s challenging,” Loy says. “But it’s so rewarding. When you see kids get a godly father again, and wives get their husbands back, and parents say, ‘This is the son that I know. I haven’t known who this was that I was dealing with for 20 years, but this is my son.’ God is doing amazing things out here. I think it is the Central Arkansas community and churches across the state and people, businesses and individuals, prayer warriors, pastors, teachers that come out here, and the volunteers that make this place so special.”