The spring of 2020 will forever have a mark on history as the beginning of this ongoing era of COVID-19. Here in Arkansas, the first case of the disease was announced on March 11 of that year. From that moment to now, an unprecedented pandemic has lingered — with ebbs and flows, peaks and valleys — with no clear-cut end in sight. 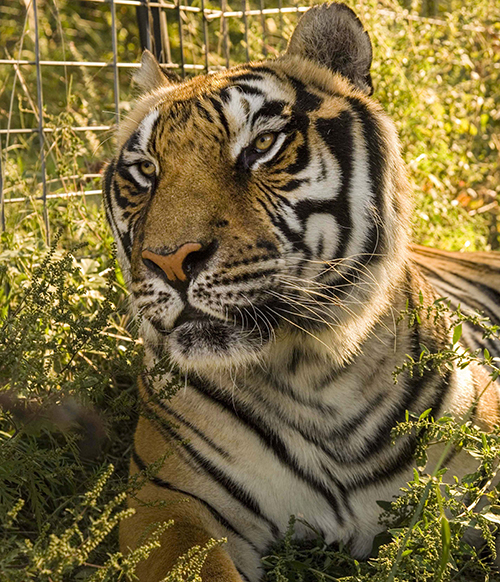 Curiously, it was also around this time that another plague became known to the mainstream. On March 20, 2020, the documentary Tiger King: Murder, Mayhem, and Madness was released on Netflix, coinciding with the soft shutdown of most of the country. From quarantine, millions of Americans and thousands of Arkansans tuned into the series simultaneously, which featured “Joe Exotic,” who operated a roadside zoo in Oklahoma filled with big cats. While watching it, viewers were exposed to a different pandemic, of sorts: the exotic animal trade — an infection that has much more quietly riddled the world for years.

Tanya Smith, president and co-founder of Turpentine Creek Wildlife Refuge in Eureka Springs, was certainly not one who had to learn about this through a documentary. She and her family have been caring for and rescuing big cats since the ’70s, purchasing the acreage that would become the refuge in 1992. At present, Turpentine is providing lifelong care for around 100 animals — which include lions, tigers and bears. Smith estimates that the refuge has rescued more than 500 “big cats and bear,” as she summarizes, since its founding. 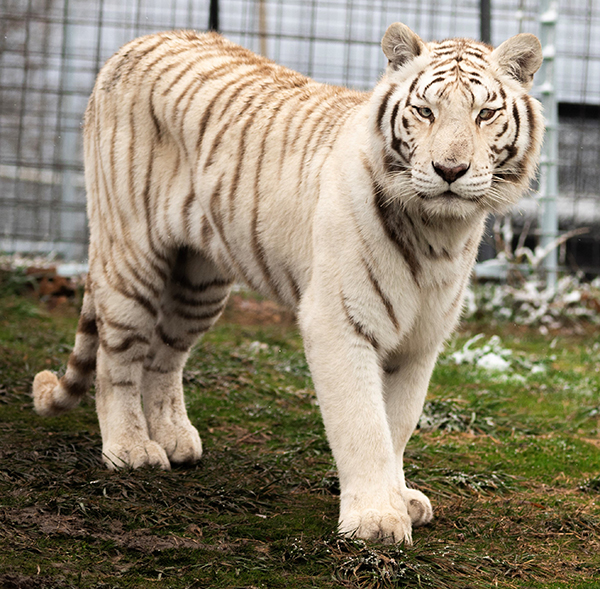 Rocklyn, a female white tiger now under Turpentine’s care, was taken from her mother not long after birth. She developed metabolic bone disease in captivity, and an x-ray taken after she was rescued at 5 months old, identified a bilateral femur fracture and a fractured left humerus. Rocklyn was unable to stand and was infested with ringworms. She still walks with a limp today, but is in much better health overall.

But as much as she loves what she does, it’s easy to presume she’d just as readily give it all up. Because if her occupation ceased to exist, that would mean we’d solved the exotic animal trade issue. The problem is, she’s been doing this a long time and continues to have more and more burden to absorb each and every year. This “-demic” isn’t so simply combated with antidotes and immunizations. 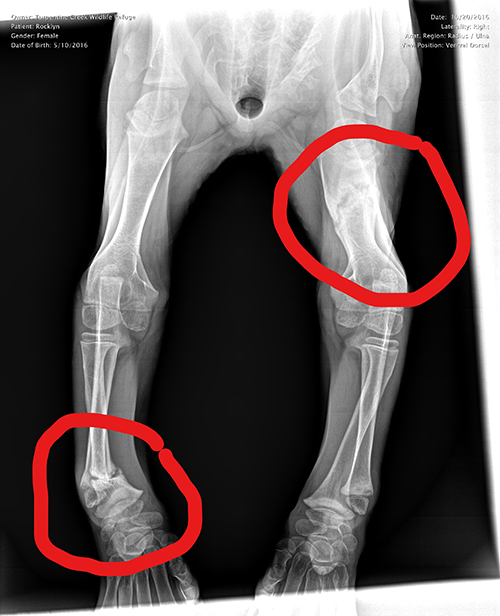 The Humane Society of the United States estimates that the exotic pet trade is a roughly $15 billion industry in America. People make, and spend, a lot of money on things like monkeys, snakes, lizards and practically every type of big cat imaginable. These animals are often poached or bred in captivity before they reach their “buyer,” typically under terrible conditions that may leave the animals permanently injured, or worse.

Going against such a booming industry is not easy, but it’s a battle that Smith and her cubs at Turpentine are proud to fight.

“Every time I go on a rescue, I think, ‘This is maybe the worst I’ve ever seen,’” Smith says. “Sometimes the conditions are just horrific at these different places. The lack of care for the animals causes a lot of abuse at other facilities.

“Whenever we go on rescue, we have to really evaluate the scene and determine what the best course of action is — how we’re going to get the animal out of that situation as safely as possible.”

Those environments can be as large as an unaccredited zoo or as small as someone’s backyard or basement. And the abuse and neglect many of these animals face spans a range just as wide, from physical torment to a lack of veterinary care, or from barbaric living conditions to being forced into “cub petting.”

“It seems really cool to go hold a baby tiger and get your picture made with it,” Smith says, going on to explain that these cubs are only “viable” for such tourist traps for a small window of time. “They’re not supposed to be used for the first month. Then, they’re not supposed to be used after they’re 12 weeks old, which is only 4 months old. So there’s only about a three-month timeframe where those cubs are even able to be held by the public. After that, they become a liability to the owner of that animal. So, if they don’t go into a breeding population at [one of] these other facilities, then usually they’re euthanized or passed to other people that really don’t know what they’re doing with them.”

As Smith preaches about these atrocities from the pulpit of her heart, the inflection of her voice matches the pendulum of the emotion this topic — her life’s work — brings up. At the memory of rescuing big cats who had been taken from their mother’s at birth, or ones who were found with metabolic bone disease because of a malnourished diet, her tone becomes subtly softer, oddly calming, as if she’s subconsciously invoking a motherly instinct to comfort a child in pain. At the mention of folks like the aforementioned Joe Exotic of Tiger King and unaccredited “roadside zoos” of that ilk (many of which she has rescued animals from), her are unbroken, determined strings of sentences that get right to the point and arrive at the same conclusion of the mission she is on herself — to put a stop to all of it.

At the Little Rock Zoo, a chimpanzee named Mikey is a bit of a pariah, at least in the great ape social circle. He is skittish, a loner, and doesn’t act like the other animals of his species. 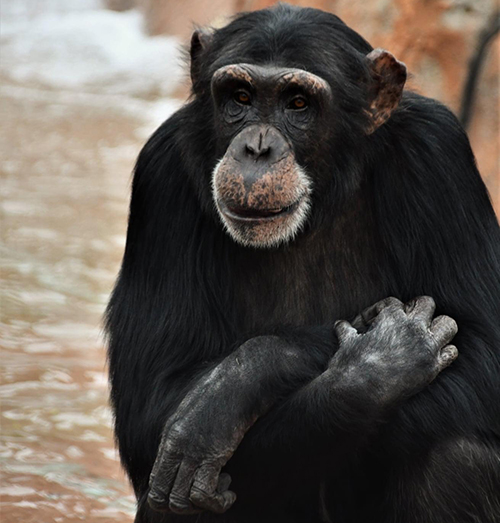 Of course, none of this is Mikey’s fault. For most of his life, he was a domestic pet to humans. That is, until the zoo took him in a few years ago. 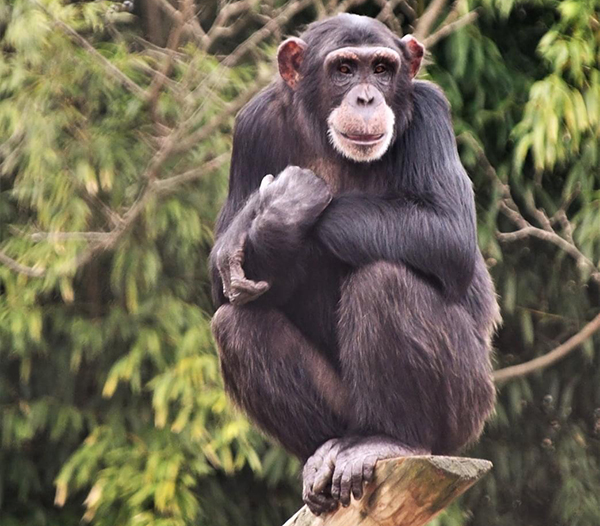 “The Little Rock Zoo is rarely able to take former pets, but this was a special instance because the zoo’s chimpanzee group was in transition at the time,” she says. “This was a challenging situation for the zoo — and still is — because Mikey did not exhibit typical chimp behaviors and was not accepted by the rest of the Little Rock Zoo’s chimpanzee group. Our staff worked for more than two years to acclimate Mikey and to improve his overall health and wellness.”

Even still, Altrui says that he is still in the process of learning proper chimpanzee social behavior. It’s an uphill battle for rehabilitated animals in zoos like Mikey, and it requires a lot of patience and sacrifice by the humans who are now responsible for his care. But Altrui and the rest of her crew at the zoo live for animals like him, because they know that the alternatives are far more critical. Like the folks at Turpentine, Altrui leaves no question to her feelings regarding the private ownership of exotic animals.

“Too often, private individuals underestimate the complex needs of these animals, as well as the individual dangers these animals can bring when they reach sexual maturity,” Altrui says. “They are cute and cuddly when they are infants, but as they get older, they are dangerous to their owners and to others. They are hard to take care of in a private home and require the expertise of staff at an accredited facility like the Little Rock Zoo. All too often, zoos like ours are not able to take in former pets because they often do not have space for them.

“The best thing you can do if you want a pet is to contact your local shelter and adopt a pet cat or dog. There is a huge need for these animals to be adopted right now, and domestic cats and dogs make very appropriate pets.”

According to Smith, consumers can do two very important things to both help these animals facing abuse, and prevent the cycle from continuing again and again. 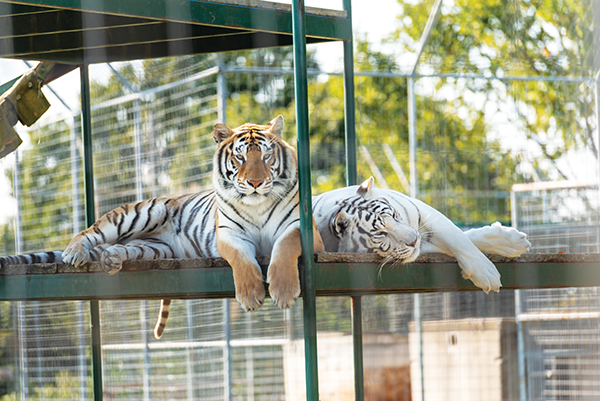 First and foremost, she says, do your research before you plan a trip to a place that houses exotic animals. Don’t contribute to the problem by visiting places that offer cub petting or other distasteful activities that are similar. Monikers like “refuge” and “sanctuary” are often used incorrectly as false advertising, but places like Turpentine are members of the Big Cat Sanctuary Alliance — the “good guys” who travel the country rescuing animals. So be conscious of who or what a place is affiliated with.

Second, Smith is a very vocal supporter of the bipartisan Big Cat Public Safety Act, which would outlaw private individuals from owning felines like cheetahs, lions, tigers, cougars and jaguars. The bill would also prohibit things like cub petting and inappropriate animal feeding. The legislation passed through the U.S. House of Representatives earlier this year and is currently being led in the Senate by two Democrats and two Republicans. To help ensure this bill makes it through the Senate and becomes law, Smith implores Arkansans to call their legislators to voice their support.

At the Little Rock Zoo, they would much rather stick to the “business as usual” part of their rehabilitation branch, which mostly consists of taking in injured birds of prey that are no longer fit for the wild, than have to continue picking up the pieces of innocent animals broken by domestic ownership — or worse.

“Many people don’t understand what happens at some unaccredited facilities,” Altrui says, doubling down on the imagery of mothers and cubs being separated for pay-to-play photo-ops. “Often, too, the incisors of the tigers are filed down or pulled to prevent the tigers from biting guests. In other cases, tigers are declawed. These facilities will often also breed tigers with lions to create ‘ligers’ or ‘tigons,’ which has no conservation purpose and is only done to feed human curiosity. Because these animals are genetic abnormalities, they often suffer a range of health problems throughout their lives.” 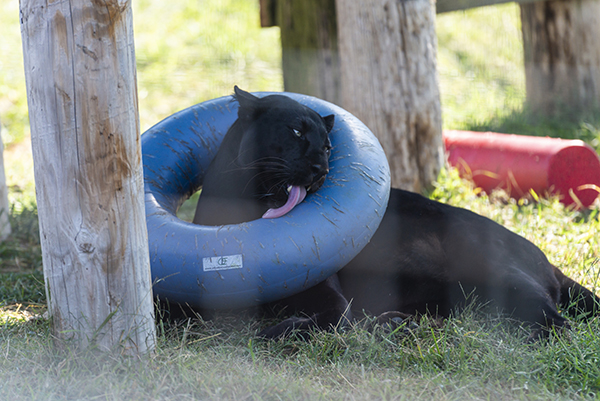 A black leopard enjoying some enrichment at Turpentine. (ADPHT)

To avoid falling prey to a “zoo” where unethical practices such as these occur, Altrui shares the sentiment of being mindful of affiliation and accreditation. The Little Rock Zoo is accredited by the Association of Zoos and Aquariums, and follows rigid but important guidelines like the Species Survival Plan for the conservation and breeding of threatened and endangered species.

Of course, both of these animal lovers also appreciate any and all support of their legitimate establishments. It costs millions of dollars per year to take proper care of animals at places like Turpentine and the Little Rock Zoo, and every dollar — be it for a ticket or a snack or a T-shirt — counts.

Smith, Altrui, Mikey and the rest of their furry friends depend on it.