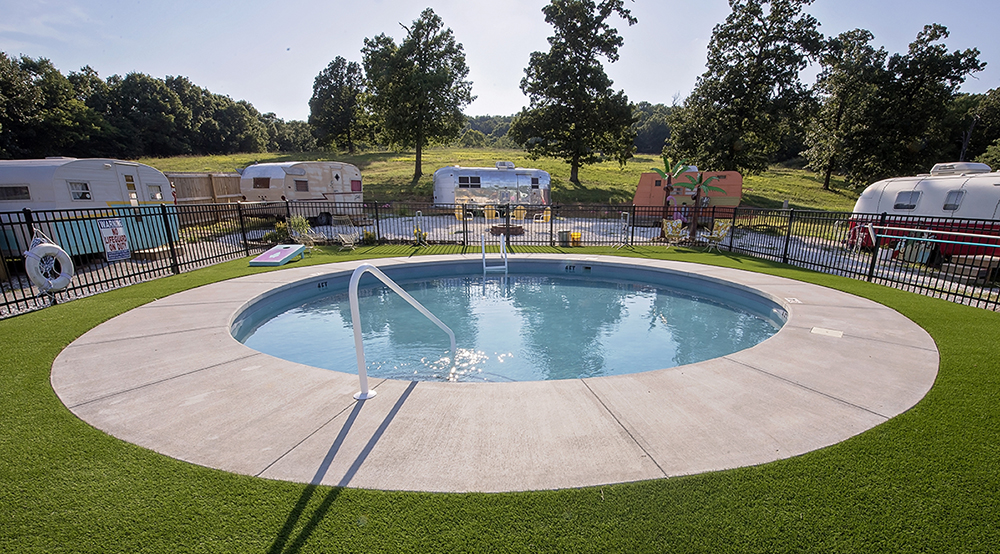 By Caleb Talley | Photography by Meredith Mashburn
There’s a mid-century modern slice of California paradise nestled on a hillside, where palm trees cast shade over a cool pool of sparkling blue water.
It’s not Palm Springs. It’s not La Quinta or Santa Barbara, either. In fact, this oasis is more than 1,400 miles from the Golden State communities that inspired it.
It can be found down a narrow, winding road that cuts through cow pastures and farmland, miles from city lights and cell towers, on the outskirts of Prairie Grove, in rural Northwest Arkansas.
Welcome to Flamingo Springs. 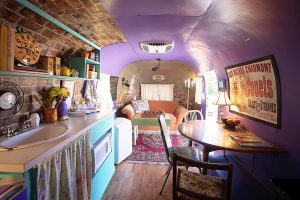 The One About the Trailer, the resorts most popular trailer, was inspired by Friends, Zack and Laura’s favorite show.

Flamingo Springs Trailer Resort is so one-of-a-kind, you certainly won’t find another like it anywhere else in the Natural State. There, you’ll find six retro travel trailers wrapped in a half circle around a swimming pool and AstroTurf epicenter. Each trailer is unique, with its own extraordinary theme and varying in accommodation. Each is a reflection of the owners, Laura and Zack Kraus, who came up with the idea for their resort while living and working in southern California.
Zack, an actor whose most recent work will be on display in the upcoming season of True Detective, grew up in a small town in Wisconsin. He studied acting on the west coast and taught college-level theatre in Riverside, outside of Los Angeles.
Laura is an Arkansas native, having grown up in Wynne before studying design and architecture at the University of Central Arkansas. After graduation, she took a job with an architectural firm in Los Angeles. They met while bartending at a saloon-style restaurant in Burbank.
Not long after that, they went into business together.
“When we first started dating, we started a business in Los Angeles. We took a camper, gutted it, remodeled it and sold kitschy, nostalgic stuff out of it,” says Zack. He sits cross-legged in a bright, 1960s-era floral lawn chair, sipping coffee from a Green Bay Packers mug. Cast iron palm trees hang overhead.
Their shop was more of an experience than a place of business, and it quickly became a fan favorite among those looking for a little blast from the past. It was a hit. They wanted to keep it going.
“People would stop and talk forever about how they had trailers like this when they were kids,” says Laura. “We made friends with so many strangers. It obviously took them to a good place.” 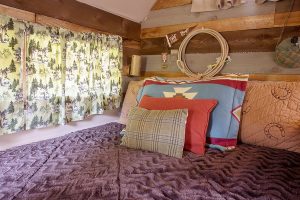 The Horn was inspired by the saloon in Burbank, California where Zack and Laura met.

And thus, the idea for Flamingo Springs was born, her husband adds. “Between the trailer and this silly stuff that made people smile, we started to think, ‘Well, what if a place existed that was just so over-the-top that it made people happy… We started dreaming about it then. That’s where it all came from. When we talked about what we wanted to do for the rest of our lives, we knew we wanted to create something. We wanted to create something that made people happy.”
Over-the-top is an understatement. Each of the six trailers that presently make up Flamingo Springs are so well themed, designed and decorated, they practically transport their guests to another place and time.
The western-themed trailer, called the Horn, is covered in corrugated metal, reclaimed wood and fit for a real cowboy. The motivation for it came from the saloon where Zack and Laura met. The Haight/Ashbury, a much smaller, shag-carpeted trailer was inspired by their trips to San Francisco and the hippie tunes Zack was raised on.
Fans of hair metal will naturally gravitate to the black leather and zebra print of the Pour Some Shasta on Me trailer. You can stay up late and talk about boys inside the Pink Fuzzy Unicorn, which is covered in all things pink, cheetah and Lisa Frank. 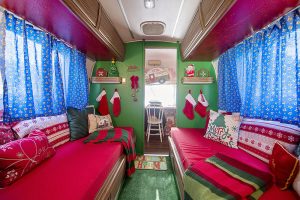 It’s Christmas all year-round in Candy Cane Lane, the largest of the six trailers. This trailer is covered in vintage Christmas decorations and wrapped, literally, in enough lights to make Clark Griswold grin. There’s an electric fireplace, VHS Christmas classics and an old Smith-Corona typewriter station, where guests can write letters to leave behind for Santa.
But according to Zack and Laura, the most popular one among guests is the Friends-themed trailer. One end of the trailer is modeled after Monica and Rachel’s iconic loft, while the other half will take you straight to the Central Perk. It’s also equipped with a television and the entire Friends series on DVD. Huggsy and the Geller Cup are there, too.
It wasn’t the first trailer they completed. But it was the first one they knew they had to do. “All of the trailers represent a little bit of us,” says Laura. “But Friends is our happy place. We always fall asleep to Friends reruns. When we got married, we walked out of the ceremony to the Friends theme song.”
Each trailer, they say, was the result of many months-worth of hunting for the right décor. “All these trailers felt like such a treasure hunt. It’s fun a challenge,” Laura says.
“In a lot of these trailers, we looked for the decorations for at least two years,” says Zack. “We’ve been looking for them at Goodwills, eBay, hiding what we’ve found in closets.”
At Flamingo Springs, guests can also take advantage of a clubhouse equipped with a pool table, table tennis and an assortment of board games – both old and new. There’s also a library, a selection of old movies on VHS and retro video games like Atari and Sega. An old juke box contains dozens of classic hits. Outside, guests can take a dip in the pool, play a round of corn hole or horseshoes or test their marksmanship in the BB gun range.
And there’s more to come. Having only been in business since June, Zack and Laura have big plans for continued expansion. They hope to add two more trailers, including one that sleeps up to six called The Royal Tenentrailer, inspired by the quirky Wes Anderson film The Royal Tenenbaums.
They also plan to add a meditation/yoga hut, carve trails through the neighboring 50 acres of wooded landscape, create a place for artists to work and build a bocce ball court. Laura wants to add a hot tub, too. 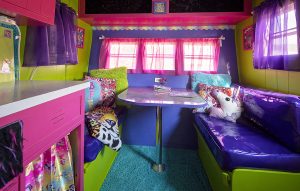 The Pink Fuzzy Unicorn will bring back memories for the 90s babies.

But what they have yet to add, and do not yet have intentions of adding, is Wi-Fi. “Both of us were torn about Wi-Fi, because we knew people would want that,” says Zack. “But also, we take pride in taking it away from people.”
For the Krauses, Flamingo Springs is an experience. And they worry that the experience they’re curating could be tainted if guests were glued to their cell phones or tablets.
“We didn’t give each trailer an individual grill. We gutted the bathrooms that were in the trailers and purposely had community bathrooms. That was all part of our vision for this place. We want to force some of the interaction that we tend to avoid… It’s nice to come out, look around the pool and see people reading, having conversation, rather than constantly being on their phone,” says Laura.
“The first night we had guests,” says Zack, “we had a guy tell us that he and his wife had the best time. He said his wife tried to get on her iPad immediately and couldn’t. She got frustrated. She put it down. Then they played board games. They drank beer. They sat by the fire and talked like they hadn’t in years… That is amazing. That’s exactly what we’re trying to do.”
The rural Prairie Grove landscape lends itself to that vision, too. But don’t let its remoteness scare you. Flamingo Springs is only a 30-minute drive from Razorback Road, making it a great place to stay for football fans making their way to the Hill this fall. 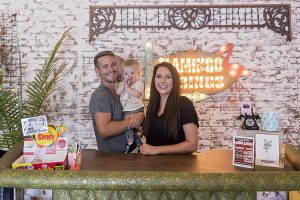 Zack, Laura and their little one are right at home at Flamingo Springs Trailer Resort.

But guests with children under 16 will need to keep an eye out for family weekends, as the resort is primarily for adults looking for a place to unwind. It’s not that the Krauses dislike children – they have one – they just want to create a relaxing environment where guests can make the most of their stay.
“We’re trying to create an experience more than anything else,” says Zack. “We’re not really interested in being hotel owners. We’re more interested in cultivating an experience and leaving it up to our guests to take and do what they want with it.”
For more information or to book a trailer, visit their website – flamingospringstrailerresort.com – or give them a call at 479-824-1021.
Retreat yo’ self. And tell ‘em we sent you.
Visit the Historic Edwardian Inn in Helena