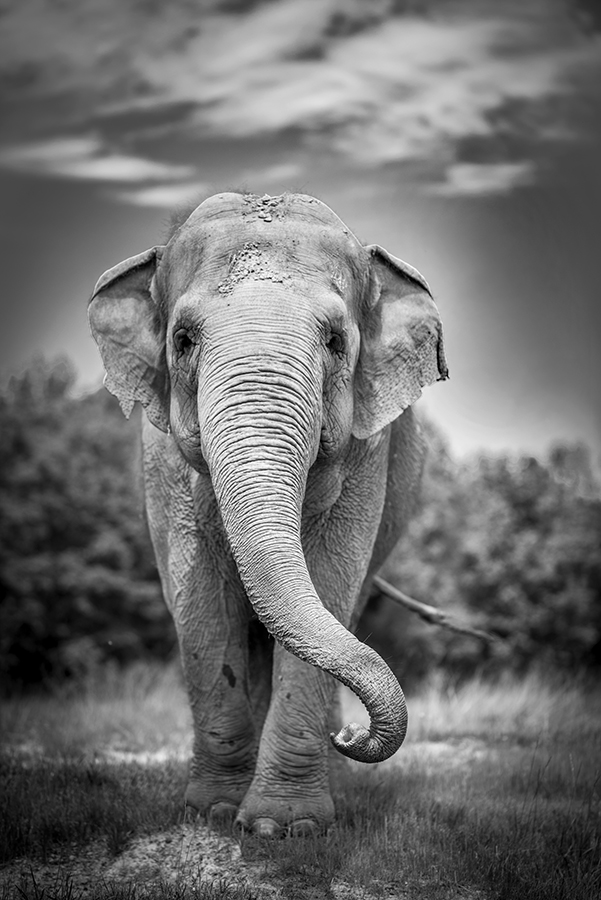 Elephant Betty Boop can be found in Quitman.

By Caleb Talley | Photography by Jamison Mosley
Having viewed one for the first time in a 1612 London exposition, English poet John Donne saw the elephant in its dignity and stature as an expression for the grandeur of the universe, a majestic beast come to earth in gigantic gray form.
About an hour north of Little Rock, off a winding Faulkner County road, those incredible creatures roam. And very few people even know they’re there.
Riddle’s Elephant & Wildlife Sanctuary, in Quitman, has been a refuge for unwanted elephants for nearly 30 years. Scott and Heidi Riddle, the sanctuary’s founders, opened their facility in 1990 with a desire to care for elephants that had been cast out by zoos and circuses that no longer wanted the long-term responsibility. 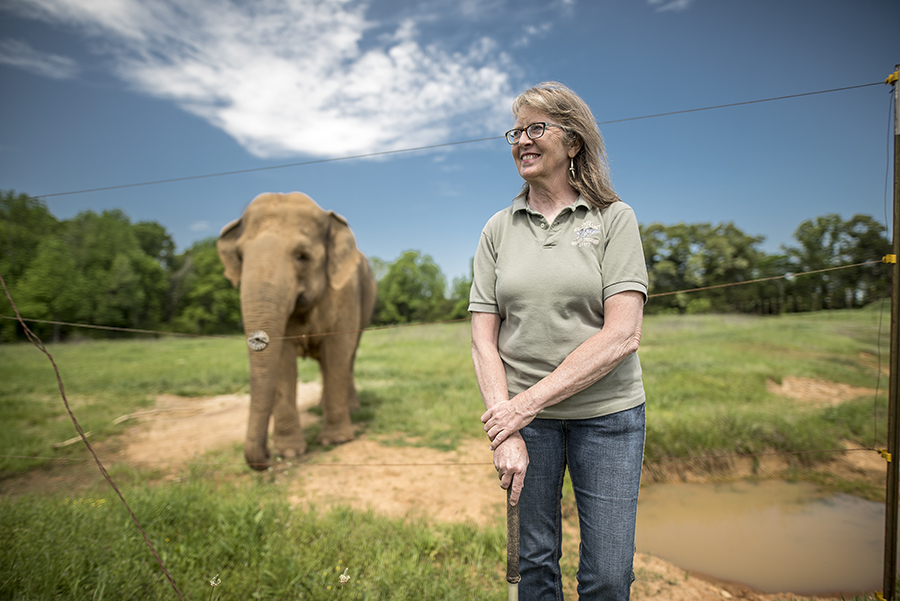 Heidi Riddle and her husband Scott have dedicated their lives to caring for cast out elephants.

“At the time, there were no facilities that were dedicated just to elephants,” says Heidi Riddle. She and her husband, Scott, met while working together at the Los Angeles Zoo. They moved to Arkansas in 1989 with a plan. The next year, they saw that plan come to fruition.
“We decided to set up a nonprofit organization that would take in elephants that other facilities didn’t want anymore, for whatever reason,” she says. Their organization was the first to take in any elephant, regardless of sex, species or temperament.
At its peak, the sanctuary was home to 13 elephants, some of which had been born there. Today, they have two Asian females, both retired circus performers. There is 60-year-old Peggy, one of the Riddles’ first elephants, and 46-year-old Betty Boop, affectionately referred to as Booper.
Having a number of different elephants provided the Riddles with the unique opportunity to study them like no one else could. They opened their doors to biologists, zoologists and veterinarians, many of whom have come from around the world.
“One of the main reasons we started this facility is to give back to elephants by learning about them, by studying them, by allowing people to come in and experience them so that they better understand what the needs are for these animals,” Heidi says. “We host workshops for veterinarians who come from all over the world – Asia, Africa, Europe. I think it’s really important that those kinds of opportunities do exist.”
The Riddles have afforded that opportunity to the public, too. For years, the facility hosted visitors for Elephant Experience Weekends, where guests were given the chance to learn how to care for the creatures – bathing them, feeding them and even tending to their toenails. They have since taken a break from the weekend experiences, due in large part to a lack of interns and volunteers to help facilitate the event. But Heidi says they hope to bring it back.
The Riddles still open their doors to students preparing for careers working with animals. They offer a month-long internship, where participants learn firsthand what it’s like to work with such large animals. The sprawling 370-acre property boasts dormitories, equipped with kitchens and laundry facilities.

“We’ve actually had many of our interns over the years go on to careers with elephants,” says Heidi. “I think, by and large, it’s still fairly popular because there are not many similar opportunities… The internship helps no matter what, because it’s either going to help you decide this is what you want to do or it’s going to help you decide this is not what you want to do.
“It’s so important to educate people,” she adds. “Just by virtue of their size, elephants can be potentially dangerous. They don’t have to be aggressive to accidentally hurt you. We feel it’s important for people who might be looking for a career in this sort of thing to get an opportunity to see what is really involved. It’s a large animal. When the interns come, they realize it eats a lot and a lot comes out the other end.”
The Riddles’ work with elephants goes well beyond a local learning experience. They’ve spent years traveling the globe, helping to educate others to better manage wild elephant populations. Just last month, Heidi traveled to Asia as part of a broader elephant conservation effort.
As a result of their work, the Riddles have garnered a decided reputation within the wildlife community, domestically and abroad. “It’s a fairly small community of people who work with elephants in North America. We kind of know everybody,” Heidi jokes.
But their notoriety in those circles has not translated to popularity among their neighbors. Heidi says they have found that many people in their community, even those on their street, don’t even realize they’re there.
“We have people who live here in this community who don’t even know we’re here,” she says, “This facility is very well known in the wildlife community worldwide. A lot of the research that we’ve done here had been done nowhere else. The work we do in Asia, too, is also really well recognized outside of Arkansas. But in Arkansas, people down the road don’t even know we’re here.”
And they’ll be there as long as they’re needed, even though Heidi points out that much has changed in recent years, and the need that existed in 1990 for an elephant sanctuary has tapered off as the zoological community has grown to better understand the animals’ needs. 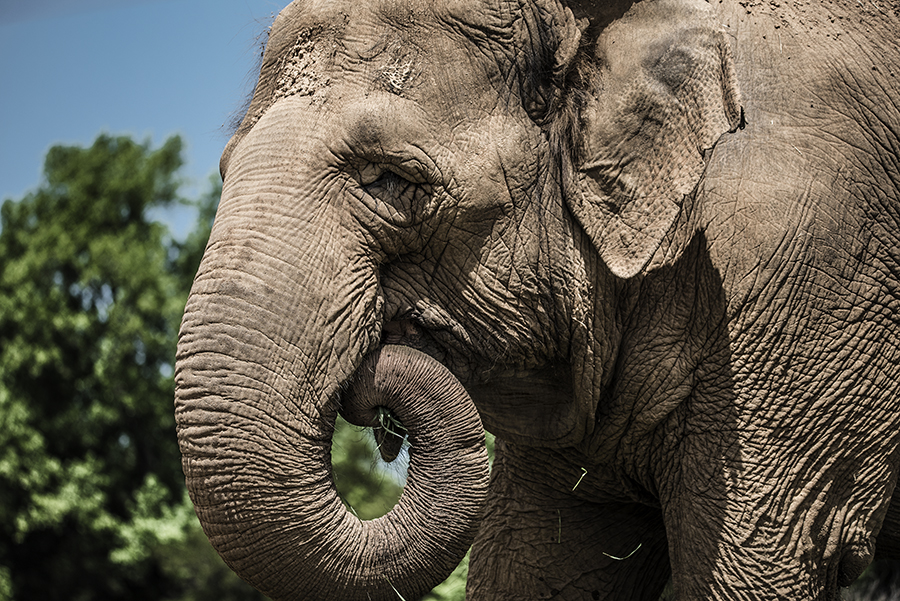 “Back when we started, there was a lot more of a need because elephants were more easily available,” she says. “A facility would say, ‘Okay, this one isn’t working here. Why don’t you take it?’ and we would. We said we’d do it, and we’re not going to start turning elephants away.”
There are more sanctuaries now that are geared towards the needs of elephants, she says. And zoos are no longer bringing in and disposing of the creatures like they were 30 years ago. Many of these new sanctuaries, though, are not open to the public.
“We don’t necessarily agree with that,” says Heidi. “We think that you owe it to these guys to help people better understand them… We’ve seen over more recent years, with the Internet, people want to get all their information and experiences from a computer screen. They’re missing the whole notion of what this animal is all about. Just being able to see them and be close to them, to watch them eat or see how they move or interact with each other. You can’t exactly get that from just watching documentaries.”
And for that reason, the Riddles are still opening their doors to visitors, despite the hiatus in their weekend experiences. And though they don’t have as many elephants as they once did, the sanctuary still has much to offer.
On the first Saturday of every month, visitors can come see these majestic creatures as they roam across the Arkansas countryside. The cost is only $5, a small donation that, along with grants and private donations, allows the Riddles to continue their work with nature’s great masterpiece, the elephant.