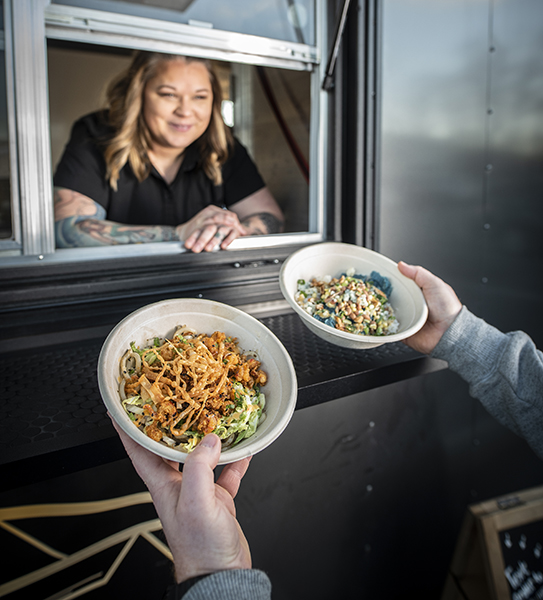 The noon hour had dissolved back into workday when I pulled into the parking lot and strolled across the concrete. I’d set out to discover my beloved city through its food trucks and the neighborhoods in which they were parked. It was a semi-ridiculous notion — my deadline was too close to do a thorough canvas of all potential locales — but I could still plow some fertile ground and get a taste, literally, of my surroundings.

I’ve always loved food trucks — the variety, the mobility, the clever names. My first stop, The Food Truck Stop @ Station 801, is a converted downtown gas station just north of I-630 in Little Rock. The city’s first such court, it promised several rigs to choose from on any given lunch hour. The day I was there, though, only one was visibly in operation, Katfish Kitchen. But that’s the thing about chow wagons — all it takes is one for a memorable encounter. 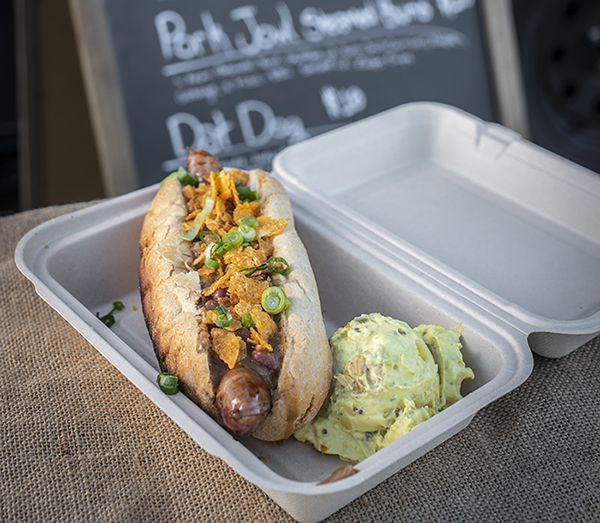 And that, I had, meeting owner Terry Hawkins. Being the only customer in line, we had time to chat while my tasty shrimp po’boy came together. We talked about how he’d bought the rig five years earlier and left it in mothballs. About how he recently retired and finally seized the courage to pursue a long-held goal of cooking for a living. And how, he says, his wife kicked him out of her kitchen seven weeks ago to learn the food truck business.

“This is my first love, cooking,” he says through the hazy aroma of plump, frying shrimp. “I don’t have a favorite. I wanted to cook everything, international food, you name it. Since I’ve been here, I’ve whittled it down to what I think is reasonably manageable. I do a lunch special every day that lets me do some different ethnic cuisines. I like the challenge of doing some of everything.” 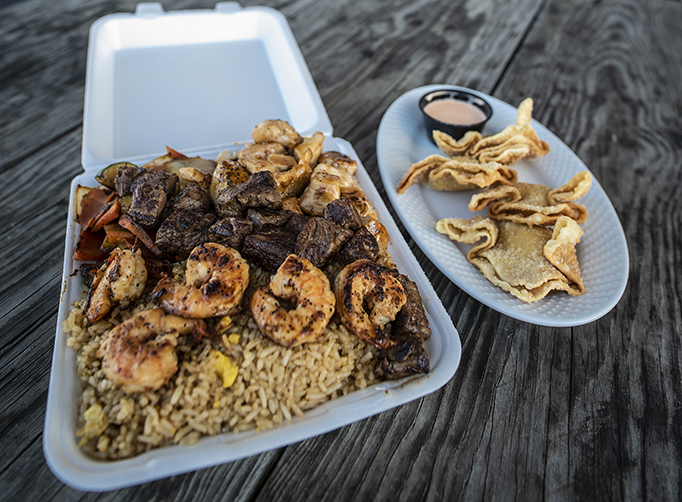 Later, I sat in my car and thought about the glimpse I’d been given into Hawkins’ life and the dream that the hot, hefty sandwich in my hand represented. There are few brick-and-mortar restaurants where you can connect with the owner like that, try though they might. I appreciated knowing his story and seeing him at work. That’s one big appeal of the food truck, the interplay between customer and cook.

“The majority of the time I do the truck by myself, and I’m able to control the flow,” says chef Jason Hector, owner of the Northwest Arkansas-based truck Crackerjack. “I try to interact with the customers when they’re at the window. It just makes it a little bit more fun. I get a lot of ‘I’m vegan,’ or ‘I’m keto,’ and I try to make their experience something positive.

“I’m not your typical taco truck. I smoke, I roast. I try to use technology when I can to make sure everybody gets something a little unique.”

There’s something very appealing in the unexpected nature of food trucks, at least the way I do them. Part of the fun for me is finding one, or more accurately, stumbling onto one. It’s an adventure lost on the office-bound or the time-pressed, but one in which a hobo like me takes great delight. I have no doubt there are a dozen little doo-dad apps that help you pinpoint a food truck’s location, but what sport is that?

In any case, Little Rock’s East Village was a slam dunk; the odds of finding a chuckwagon here are on par with finding mud in a pigpen. This is the kind of neighborhood that lives for mobile kitchens, and this weekday was no exception. Fathead Bbq Etc. was holding court, and a cheerful crew of three was blowing succulent pork smoke all over Little Rock’s newest district of the hip. Locals followed the olfactory delights out of office and auto, drawn inexorably to the truck like extras in a George Romero flick.

I took my turn and chose the BBQ quesadilla. I wasn’t hungry, this being my second stop of the day, but I’d come this far and duty called. God a’mighty, was it good. The kind of good that makes you question all  previous food choices. New Year’s resolution-be-damned good. Last meal good.

“Sometimes I wonder why people love food trucks so much,” says Westley Widachman, owner of Southern Hibachi Express. “Maybe because it’s fast and cheap, too. Our teriyaki chicken, you order, you get it in less than five minutes, and you go.”

Food trucks may seem like a recent phenomenon, but they are, in fact, a very old invention. Street food has been with us as long as there have been cities and with it, food carts that allowed the vendor to move from place to place where the customer action was. In fact, archeologists have excavated in the doomed Greek city of Pompeii evidence that street food vendors were numerous, per Food: The History of Taste.

Carts came with the stream of humanity to the New World: In New Amsterdam, later to be renamed New York City, food carts were so immediately prevalent, city officials started regulating them as early as 1691, according to Mobile-cuisine.com. As time and immigration continued, food carts began to reflect changing tastes, tailored by vendors’ own food traditions. When rail travel grew food carts did also, providing a handy way for travelers to grab a quick bite. 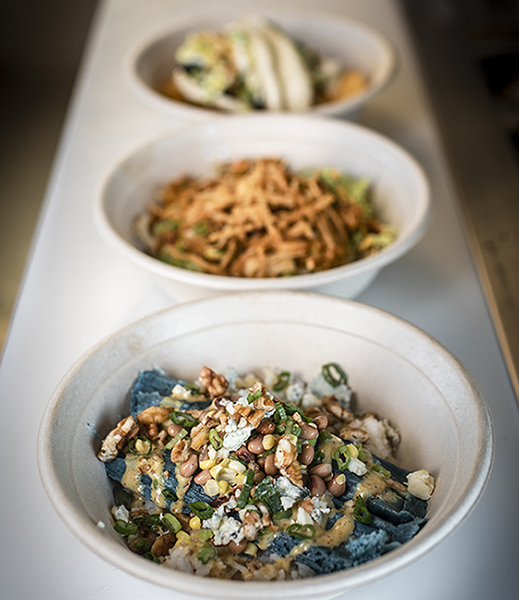 And along the way, they provided a living for many entrepreneurs of modest means, people for whom a brick-and-mortar storefront was a pipe dream. Many of today’s food truck entrepreneurs found themselves in the same situation starting out.

“The good thing about a food truck is, you don’t have to have a building which costs a lot more money and a lot more overhead,” says Widachman, who’s up to five trucks with two more on the way. “In the building, you have high rent, high electricity. We still have insurance, but a lot less than on a building.”

In Chef Hector’s case, the lure was regaining life balance, something sorely lacking during his tenure in the terrestrial restaurant business.

“I’ve been working in the food industry for almost 25 years as either an executive chef or an executive sous chef,” he says. “We were living in St. Louis when we got to a point where I was working 75 to 80 hours [per week]. I was kind of beat up.”

“My wife got pregnant, and I decided I wanted to be there for my kids, so instead of doing a brick and mortar, I thought why not just do a food truck. That way we could say yea or nay to certain events.”

In 1866, legendary Texas cattleman Charles Goodnight devised a kitchen wagon for use on cattle drives. This “chuckwagon,” Mobile-cuisine.com points out, was the prototype for the modern food truck, followed some fifty years later by U.S. Army canteens, field kitchens which fed troops in forward positions.

From there, the food truck steadily continued its refinement. The website notes such landmarks as Oscar Mayer melding branding and chow with the Wienermobile in 1936; the introduction of ice cream trucks in the 1950s and so-called “roach coaches” of the 1960s serving workers at construction sites and factories. In 1974, Raul Martinez converted an old ice cream truck into the nation’s first taco truck, parking it outside an East Los Angeles bar. 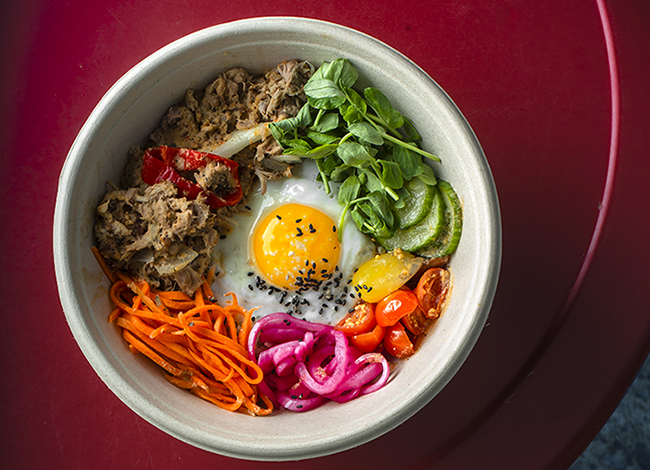 Over time, the number and nature of food trucks have grown exponentially; IBISWorld reports the industry is projected to hit $1.1 billion in 2022. Today, any festival worth its salt has a few trucks hanging around, as do local ball games, concerts and any other event that draws a hungry crowd.

And if you really want food truck overload, check out the events built around the trucks themselves. Little Rock’s Main Street Food Truck Festival, which last fall boasted nearly 90 vendors and served hundreds in its ninth iteration, is the granddaddy of the lot but hardly the only such show in Arkansas.

All of which stands in testament to the wild popularity and seemingly endless variety offered by our beloved food trucks. What’s your pleasure: Pizza? Burgers? Turkey legs? Cajun? Lobster roll? Something green or meatless? You can find it all.

Day two of my abbreviated tour was gray and overcast, and some of the trucks I looked up proclaimed they were closed due to a wet forecast. Sure enough, as intermittent rain fell, at times heavily, I wouldn’t see a lunch wagon from midtown to west Little Rock and southward where I hopped onto I-30 and doubled back to Geyer Springs Road. There, in the space of three blocks, four trucks stood, their neon “OPEN” signs slicing through the gray afternoon in this predominantly Hispanic part of town. I was about to come face-to-face with the blue-collar backbone of what can sometimes be a very flighty industry. 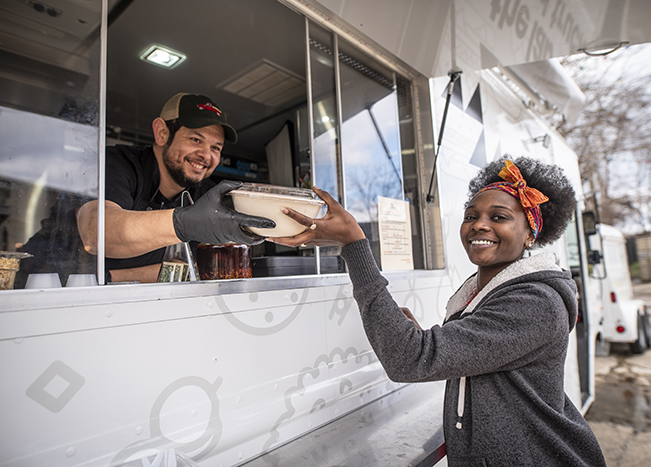 Rain dripped from canopies emblazoned with the rigs’ names: Maria, Gloria, Samantha. At each I ordered tacos — dollar-sized, piping hot and cheap — and at each I watched women, proprietors all, prepare the food from scratch. Three of the four trucks were battered with age; on one, the posted weekly hours of operation totaled nearly 80 over six days. Obviously, it would take more than a little weather to shut them down.

Most patrons pulled up in similarly beat-up pickups and service vans, the occupants daubed with paint or smeared with drywall mud. They greeted and ordered in their native tongue, and the food they took back was sturdy and simple; enough to carry one through the day, chase off the chill.

My order in hand, I watched raindrops disappear into the steam on my windshield from the savory carnitas, chorizo and tripas. I wondered how many $2 tacos it took to make rent, buy groceries, clothe children and come back for another day’s work. I wondered how many average Little Rock residents knew what was here for the asking, a cultural lesson as well as a culinary one. How much better would we be if we learned to know and appreciate one another, if only through our food traditions, even if it had to be trucked to our front doors? Indeed, what an amazing thing that could be. 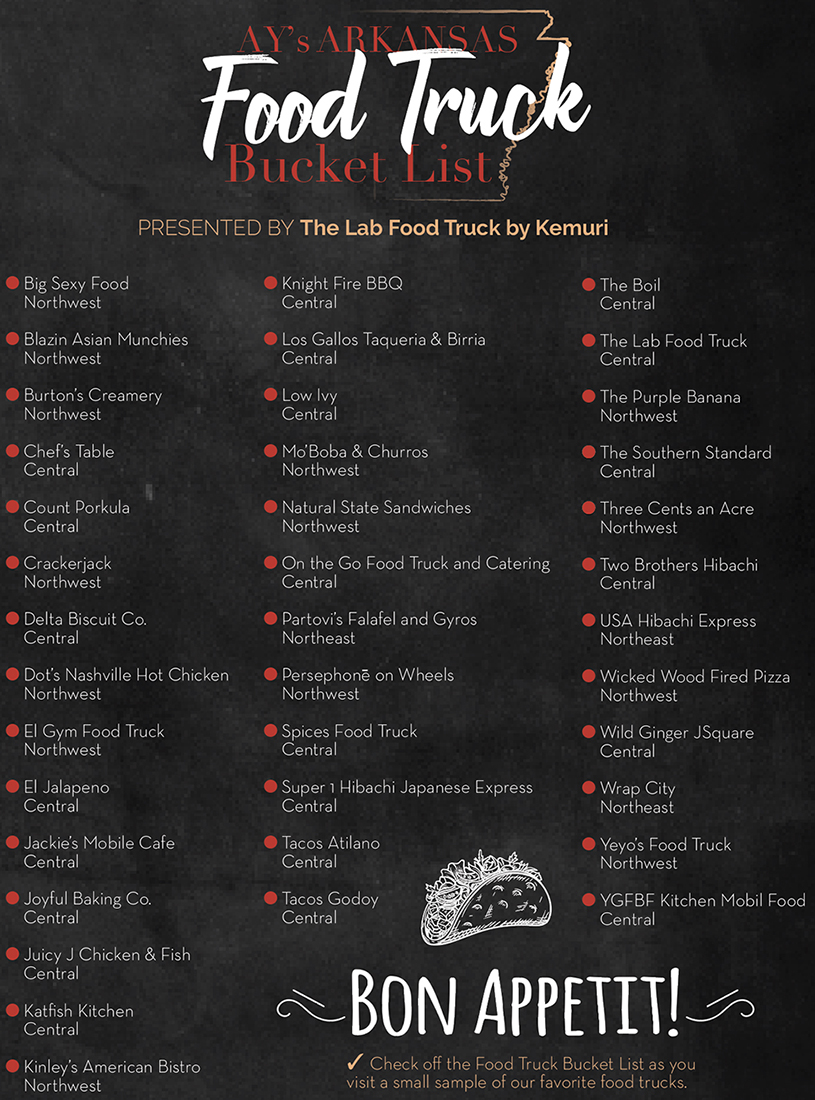