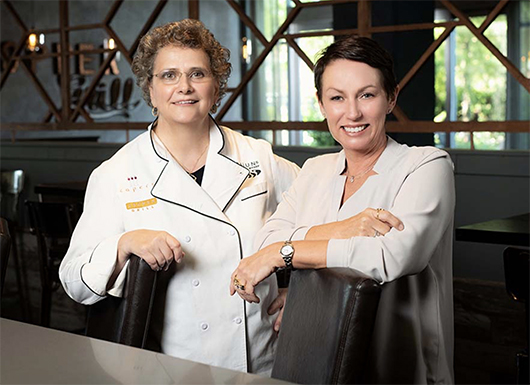 Two of the brightest figures in Arkansas’ restaurant scene will be chairing the highlight of the culinary season next year. Restaurateur Mary Beth Ringgold and wine columnist Lorri Hambuchen will be co-chairing the 13thannual Diamond Chef Arkansas competition in 2020.

Every year, Diamond Chef Arkansas pits six Arkansas restauranteurs against each other in a series of cooking challenges, battling for the honor of being named that year’s Diamond Chef. The competition, which has become a major draw in Little Rock’s social scene, benefits University of Arkansas – Pulaski Technical College Culinary Arts and Hospitality Management Institute.

Both Ringgold and Hamchen are well-acquainted with Arkansas’ culinary crowd, bringing more than 60 years of combined experience to the table for the competition. Diamond Chef brings six promising and established executive chefs into one kitchen to demonstrate their skills and talents before their peers and a crowd of appreciative fans.

“The competition, which consists of six executive chefs competing in two cooking elimination challenges, is a great demonstration of the camaraderie we have within our industry. These are my friends, I always want everyone to win,” Hambuchen says.

As Ringgold says, “We are champions for this cause because it brings everyone together under one roof.”

Ringgold has personal experience with Diamond Chef – she was crowned the winner in both 2017 and 2018. She was the first – and only so far – woman to win the competition. Because of her back-to-back wins, she was named to the Diamond Chef Hall of Fame.

She is best known for being the owner of Copper Grill and Capers in Little Rock, as well as the recently closed Cajun’s Wharf.

Hambuchen has served as a Arkansas Democrat-Gazette columnist, writing the Uncorked wine column. She holds a diploma in Wines and Spirits Wines and Spirits from the Wine & Spirit Education Trust (WSET) in London and is the owner and operator of The Wine Center.

“It is very exciting to imagine how Mary Beth and Lorri will elevate Diamond Chef to the next level. Because they are intricately involved in the food and hospitality industry, I think it will make the 13th Annual Diamond Chef Arkansas a fantastic experience for everyone involved,” says Shannon Boshears, Executive Director of the UA Pulaski Tech Foundation.