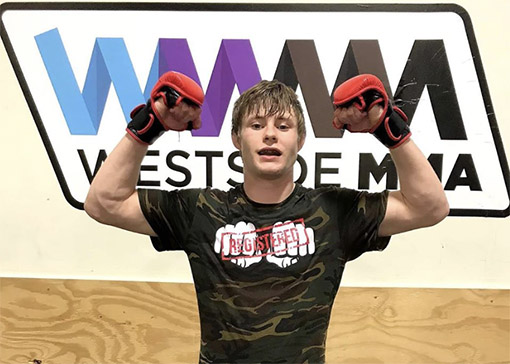 Last Saturday evening, I was lying in bed watching ESPN. (Don’t judge, it is quarantine after all.) My family was all in other parts of the house, but that only lasted about 10 minutes as has been the case the past three months isolated at home.

“This guy is from Arkansas. I wanted to check him out,” I said.

So, J.D. and I watched as Bryce “Thug Nasty” Mitchell put on a clinic beating Charles Rosa in a unanimous decision. The win moved Mitchell to a dazzling 13-0 record in MMA and 4-0 in UFC after competing in The Ultimate Fighter: Undefeated Featherweight Tournament. Even though he lost in the semifinals, Ultimate Fighting Championship (UFC) signed Mitchell, and he has surprised some by keeping his undefeated streak intact, catching the eyes of MMA pundits and fans around the country and in his home state.

Before we go any further I must tell you: I am not a combat sports enthusiast. I have always been a casual boxing fan although I do love Muhammad Ali and growing up in the 1990s was enamored by the power of Mike Tyson. I would always be more likely to watch boxing than MMA, but I recognize its place in the sports world. The ESPN 30 for 30on Chuck Liddell and Tito Ortiz and the evolution of MMA was very interesting and enlightening. And unlike some other writers who pen sports columns, I like to cover a broad range of topics and write about what YOU want to read about.

You should want to read about Mitchell if only for the simple fact that he is a proud Arkansan. So proud, he screams about his home state to the top of his lungs after every fight. As he begins his ascent up UFC, he is on a similar path as former boxing champion Jermain Taylor, a Little Rock native. Before a horrific head injury and out-of-the-ring incidents derailed his career, Taylor had won over the state. I will never forget the victory parade held in his honor in downtown Little Rock following his upset title-match win against legendary Bernard Hopkins.

So, Mitchell, who grew up in Cabot and is a student at Harding University, is on his way to capturing hearts in a similar fashion. Mitchell received tons of social media kudos from Natural State fans – the most notable coming from the Arkansas football Twitter account, Arkansas basketball coach Eric Musselman and former Hogs basketball player Blake Eddins, just to name a few.

Mitchell took advantage of the almost-prime-time slot on ESPN as one of the undercard matches of UFC 249, a pay-per-view extravaganza normally broadcast in front of a packed arena when America is not in the middle of a pandemic.

No matter – Mitchell put on a show anyway. The Brazilian jujitsu black belt dominated Rosa on the ground, and he was never a real threat. On a few different occasions, Mitchell nearly scored the submission. From my untrained eye, Mitchell looked like many of the standout prep wrestlers I covered in Iowa. He is very adept on the ground and a lot stronger than his wiry, 145-pound frame would indicate.

After the dominating performance, familiar UFC personality Joe Rogin conducted an in-ring interview. Like he has repeatedly, Mitchell pleaded with Rebook, the official outfitter of UFC, to make him some camo shorts. By the time the event was over, White let Mitchell know his shorts were in the works. It’s amazing what a dominating television performance and undefeated record can do for you.

Some MMA pundits expect this win to vault Mitchell up the rankings. He’s past every test so far, and apparently what he did Saturday to a decent opponent sent off some shockwaves around UFC. Mitchell is proving he is going nowhere but up. It doesn’t hurt that he has a great personality and does well with interviews while always enthusiastically representing Arkansas. Those sound bites are great marketing tools and although MMA would like to distance itself from pro wrestling, working the mic and establishing an image seems to be almost as important in UFC as it is in WWE.

On Tuesday, I heard a commotion coming from my son my 8-year-old son Luke’s room. J.D. had him in a twister submission hold similar to what Mitchell had applied in his win. “Look, Dad, I am Thug Nasty.” I quickly broke up the skirmish. If Mitchell mania has hit the Olson house, I know the rest of Arkansas is soon to follow if it hasn’t already. Here’s to Mitchell – the next big thing from the Natural State.