Arkansas farmers have endured one of the cruelest summers imaginable and the season is not over, yet. Water, the very resource that has kept the Natural State green throughout history, has become the enemy with record rainfalls this year. Beginning in late May (and coinciding with snowmelt runoff from the Midwest), the deluges sent the Arkansas River and its tributaries rolling above their banks.

Despite the determined efforts of exhausted sandbaggers, flooding overwhelmed some of the state’s aging levees in the months of May and June, washing onto vulnerable farms. It kept coming, leaving some locations submerged for days or longer. While the good news is the water eventually receded, the bad news is it left thick deposits of residue smothering previously ready-to-plant fields along the Arkansas River, from Fort Smith to the Delta. Even as these acres dry, they cannot be made ready in time for this year’s growing season.

Robert “Crash” Carruthers (whose nickname stems from car wrecks in his youth) is a Morrilton pecan grower. Carruthers’ was over 10 feet of water in his 160-acre orchard.

“I was fortunate,” Carruthers says, “I’ll probably lose about 300 to 600 young trees I planted. The older trees look like they’re going to be fine. I was super, super lucky, [although] I will probably lose $30-40,000. There are people that, for three or four generations, their families have farmed up and down this Arkansas River, and I don’t know if they are going to make it. It’s devastating.”

Before the flood, most farms southeast of Carruthers’ orchards had water wellheads three feet or so above the ground. Many of those heads are now nearly flush with a newly-deposited layer of sand. The sand has no topsoil or nutrients; nothing to support farm-variety plant life. Carruthers has never seen anything like it. 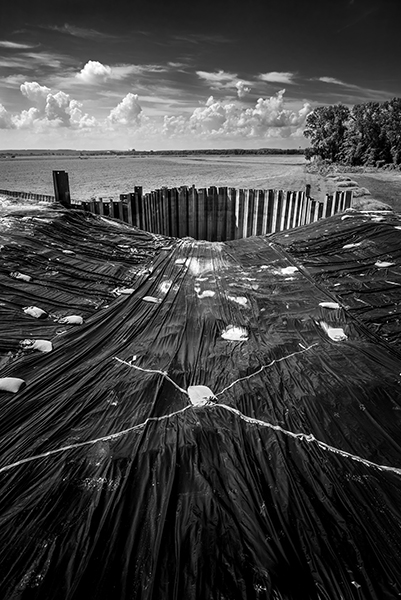 What’s left behind is alien, otherworldly.

“There are places where three or four feet of sand has just been dumped onto people’s topsoil,” Carruthers estimates, “There are some fields where a guy was ready for [soybeans] to be planted, and it looks like the surface of the moon or carpet bombs. There are just craters everywhere. I’ve seen a lot of scouring and stuff from water, but this evidently has swirls in it –  the whole field has pits in it that are 10- to 15-feet deep.”

A pork-producing friend of Carruthers in Yell County was able to move all of his equipment before the local levee breached. And he was moving his hogs to safety as fast as he could, but he lost half of his herd. His barns were inundated with silt and debris.

“He’s devastated,” Carruthers laments, “He’s probably close to being around 60 years old. Now, he has lost everything. How do you go back in and want to start over when you’re that age? You’ve lost everything you’ve worked for all your life.”

The bad weather is salt in the wound for Arkansas’ agriculture community. By the spring of 2019, tariffs from the United States’ trade war with China had been devaluing produce exports for months. Whether or not the economic conflict proves to be a sound long-term strategy for America — and a preferable alternative to military conflict with Beijing — its short-term effects are a bitter pill for farmers to swallow.

“Along with the weather, the tariffs — the trade wars — are another nail in the coffin of most agriculture entities in Arkansas to a large extent,” Carruthers notes, “Even if we sign something with the Chinese today, they have moved to other sellers. You don’t change your partners unless you’re forced to… They have moved on to Brazil, Argentina, Mexico, Canada and other countries.” 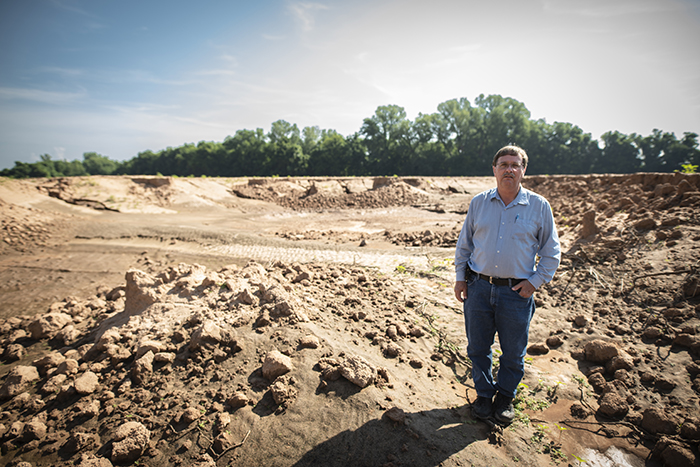 What used to be a ready-to-farm field is now more akin to the surface of the moon.

In the corporate world, if disaster strikes a place of business, many may simply call their insurance agency. In the agriculture industry, things are much more complicated. While most other business owners would never borrow massive sums for their day-to-day operations, many modern farmers have to do so every year. A grower’s assets may be worth $500,000, but he or she can owe as much as $400,000 in loans.

The remaining $100,000 may sound like a lot at first, but — it bears repeating — these situations are extremely complicated.

You may also have a foot or more of silt or sand in your barn (and everywhere), radically lowering the value of your property, Carruthers notes. Figure in damaged farm equipment and the big picture begins to set in. Even if banks forgive the loans of some, the very amount that is forgiven immediately becomes considered taxable, and you cannot declare bankruptcy against that. 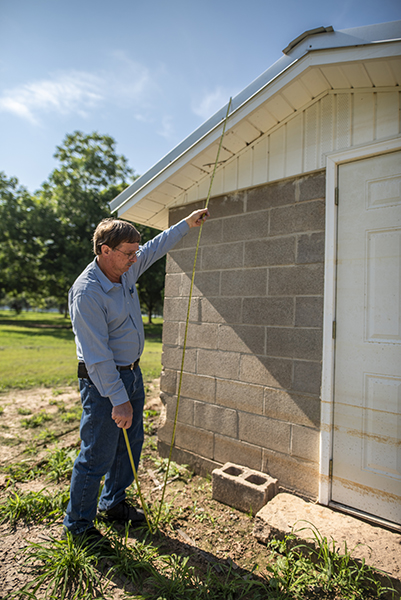 Carruthers holds up a tape measure to show how high the water level was at the peak of the flooding. The stains on the building provide proof of his visualization.

The floods mostly hit areas affected by the Arkansas River and her tributaries, so thankfully there are growers and ranchers that suffered few, if any, losses. Nevertheless, the sudden ruin that many now face is almost reminiscent of the Dust Bowl days of the early 1930s, when farms of the Great Plains were erased overnight.

“I’m afraid that we’ll see more people that are so depressed…,” Carruthers fears. “I know some that are… Because there’s no way out. There’s just no way out.”

Kevin McGilton, Vice President of Government Affairs with agricultural cooperative Riceland Foods, says that rice farmers are stressed, too. Excess moisture in 2018 meant harvesting ruined soybeans along with the grain. This caused exporters to discount the commodity, which is grown every other year to replace the nitrogen that rice consumes from the soil.

Now, in 2019, the weather has delayed things so much that the current rice crop may be the latest-planted anyone can remember. Late plantings mean lowered yield expectations.

McGilton says that preparing for 2020 has also been challenging. Many normally-more-reliable trade indicators that farmers plan the coming year by are obscured by smoke from the financial battlefield.

“It’s been very hard to read those market signals because of the trade war,” McGilton says, “If you have traditionally, say, planted half of your 3,000-acre farm, it’s been very difficult to make that decision as you watch the news and you see the back-and-forth negotiations that are going on. One week it looks like a trade deal is very close to being done, and then over the weekend something happens and blows up. The next thing you know, there’s no trade deal.”

This does not mean that Natural State farmers are giving up. If the United States-Mexico-Canada Agreement (USMCA – NAFTA’s possible descendant to-be) is ratified, McGilton hopes that robust trade with Mexico and Canada could resume this year. Given time, fences could also be mended elsewhere.

“Today we are not selling any rice to China,” McGilton says, “It’s obviously a very, very political crop over there — the industry has been working on it for many, many years — and we feel like we’re very close. Today China is not a market for U.S. rice, but we would hope it would be very soon.”

Despite the rough start, this is not Arkansas’ last growing season. Travis Justice, the Arkansas Farm Bureau Federation’s Director of Commodity and Regulatory Affairs (and chief economist), advocates keeping things in perspective.

“Overall global market reactions and so forth may be a little intense this year, but we’ve seen that before,” Justice observes, “If the weather changes up, we could go on to have a decent crop this year. If we sign some of these trade deals here… that whole picture could just reverse. There’s potential out there. [But] right now, while we’re paying the bills today, it’s difficult. But certainly, the potential for improvement is there.” 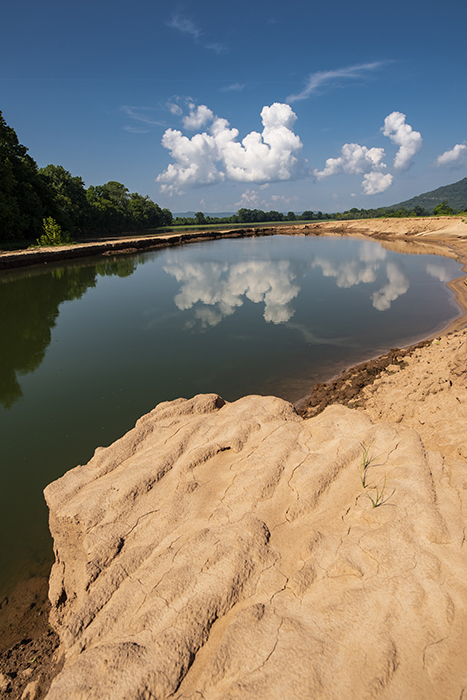 A water-filled crater lake resides within a landscape that would be farmland.

While noting that repeat flooding in 2020 would be a disaster for Arkansas agriculture, Justice is quick to tout the resilience of state farmers: many are still producing crops. Despite the tariffs’ impact, the farm industry’s stalk is hanging on, beneath the withered foliage.

“Everybody’s hanging their hat on China, and that is a significant factor in this whole equation,” Justice says. “They have not been playing by the rules that they agreed to on a number of areas, including some in agriculture. Now we’re in serious negotiations with them and exchanging tariffs is part of that negotiation tool, which has interrupted normal flows. But that’s the system that we’ve engaged in to negotiate. At least we are still negotiating.”

The federal government has issued subsidies to farmers across the nation in an effort to dampen the blow of the ongoing trade war and repay tariff losses. In Arkansas, the total has reached nearly $300 million, according to federal records and the Environmental Working Group.