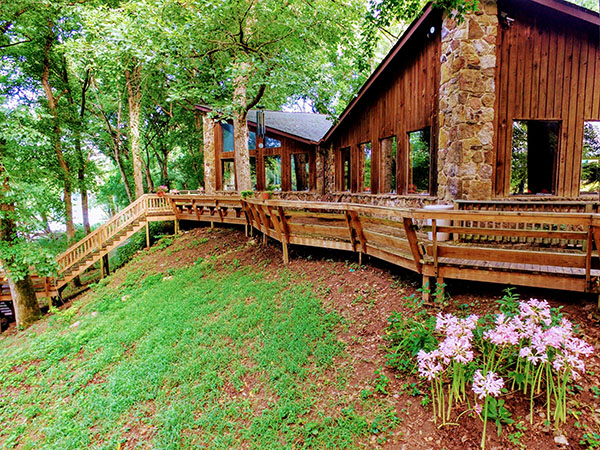 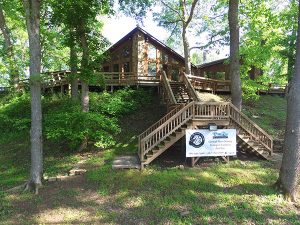 Six miles from Norfork, nestled in the wilderness overlooking a tranquil stretch of the White River, is River Run, a renowned restaurant that is part of PJ’s White River Lodge.
Despite its remote location, weekends are often  booked so reservations are strongly encouraged. The wrap-around deck, with views of the river, is a popular place to sip a glass of wine and nibble on an appetizer before dinner.
The business is family owned by Charlie Pasquan,his wife, two sons, daughter and son-in-law. The family moved here from Temecula Valley, Calif., and since relocating have welcomed a grandchild and have another on the way.  Their daughter Ann, who is the executive chef, is seven months pregnant. 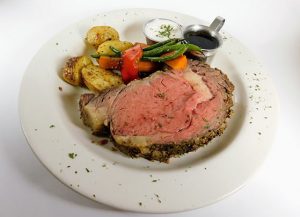 Some of the signature dishes include a smoked trout appetizer; a six layer coconut cake; and prime rib.
“The last coconut cake we donated to a church auction last spring went for $2,000. I am serious. Our prime rib has won awards, it won Best of Taste of Twin Lakes. You won’t find a finer steak in Northern Arkansas, than right here. Our ribeye is very popular. All steaks are hand cut. A hidden gem on the menu are pork chops. People rant and rave about them,” says Charlie.
The lodge was founded in 1986 by Paul and Joyce Campbell, hence the  PJ in the name.  The second owners built the restaurant business and while the Pasquans have added to the menu, they didn’t want to completely revamp it because it was already successful.
Since taking over in 2015, they launched a pub menu and open for Sunday brunch. 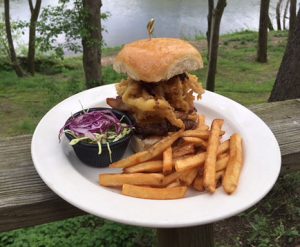 “We do fish tacos, shrimp tacos, a White River cheesesteak, burgers, duck fat fries (for the pub menu). It’s a little bit less expensive. It’s very popular. We did it because we have a reputation for being a little expensive, but you get what you pay for,” Charlie says.
Last year, they started a wildly popular chef’s dinner series which was limited to 30 patrons. The dinners were seven to nine course meals paired with wines and ranged from $90-$130 per person. Since the executive chef is pregnant, those dinners are on hold this summer, and Charlie hopes to resume them in the fall.
Ann is married to  Jimmie Green, who runs the restaurant. Each family member has their job.  The lodge was actually Jimmie’s dream. An avid fisherman, he always wanted to own a fishing lodge and looked around the country, before deciding to visit Arkansas. He fell in love with the spot and the rest of the family decided they wanted a change and to get out of California, so they all went into business together.
In Arkansas, they have found the friendly, small town feel they were looking for. 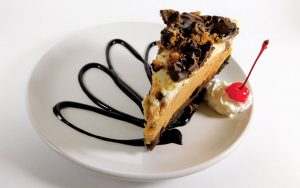 “This is our little slice of heaven,” says Charlie. “ It’s just beautiful down here. The river is just beautiful. My wife and I enjoy sitting out on the deck having coffee in the morning and the only traffic we hear are the birds.”
Information:
PJ’s also has a lodge, hosts weddings and offers guided fishing trips. There are seven rooms that range from $99-$119, with two night minimum. Add $10 for single night. The rooms do not have river views.
The restaurant is open 4-8 p.m., Thursday- Saturday; from 10 a.m. to 2 p.m. for Sunday brunch. Reservations strongly recommended.  Charlie says even if people cannot pin down a time they plan to dine, it helps to call and let the owners know they are coming, so they can adequately staff the restaurant.
PJ’s White River Lodge, 384 Lodge Lane, Norfork, Arkansas. (870) 499-7500; https://www.pjslodge.com/
READ MORE: Nyx Café Restaurant and Bar