Built in 1939, Robinson Center suffered from old, inefficient mechanical systems, difficult loading and access and poor acoustics; but with the new renovations, Robinson is capable of “doing every possible show that tours,” said Ed Payton, CEO of Celebrity Attractions.

The center’s additions include a performance hall with enhanced acoustics, technology and dressing room upgrades, full ADA access and an expanded loading dock and storage. Additionally, guests will enjoy expanded public lobbies and a new Grand Ballroom with views of the Arkansas River, among other additions.

The 2016-2017 season will feature Robinson’s biggest show of all time, Peyton said, “a show that has a cultural and economic impact.”

The show, Cameron Mackintosh’s production of Andrew Lloyd Webber’s “The Phantom of the Opera,” will make its Arkansas premiere at the Robinson Center Music Hall. The production will run March 8-19, 2017.

The new version of “The Phantom of the Opera” is performed by a cast and orchestra of 52, making this one of the largest productions on tour in North America.  Season subscribers to Celebrity Attractions’ 2015-2016 Broadway Season will have priority in securing their seats in the newly renovated Robinson Center for the 2016-2017 Broadway Season.

The show, from original producer Cameron Mackintosh, retains the story and score of Andrew Lloyd Webber. The sets, lighting and sound have been redesigned for the new production, while retaining the original Tony Award-winning costumes.

Mackintosh’s production of “Phantom” is “even more spectacular and incredible than ever before,” Peyton said. When the production ran in Oklahoma City, it had an impact of over $11 million during its 2-week engagement. “We expect that same kind of economic impact [in Little Rock],” Peyton said.

“We talked a lot about making sure this new performance hall was Phantom-ready,” said Gretchen Hall, president and CEO of the Little Rock Convention & Visitors Bureau and owner’s representative for the Robinson Center renovation.

“Broadway entertainment is in many ways synonymous with ‘The Phantom of the Opera.’ We are so excited that, for the first time, this amazing Broadway production is coming to Little Rock,” Hall said. “The $70 million renovation of Robinson Center will now provide the staging and state-of-the-art facility needed to host such a large production,” she said.

“As we stand here today, we are on time and on budget, and we will reopen in Nov. of 2016,” Hall said, adding if you build it, they will come. “We’re building it, and they are coming,” Hall said. 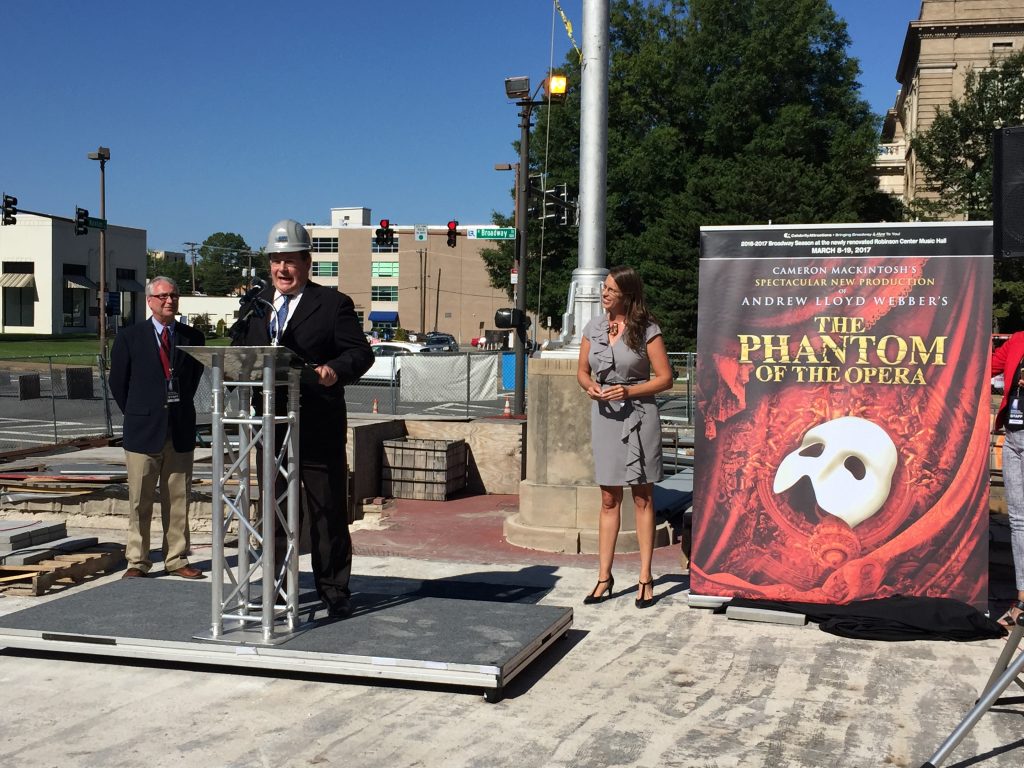 The magnitude of this production will draw people from all over the region, said Little Rock Mayor Mark Stodola. Robinson Center is a monument to the past and the future, Stodola said, “the future of culture in our city.”

Theater-goers can expect many additional announcements to come. Season tickets for the 2016-2017 season will be available in late Spring 2016, and individual tickets for “The Phantom of the Opera” will go on sale later that year. 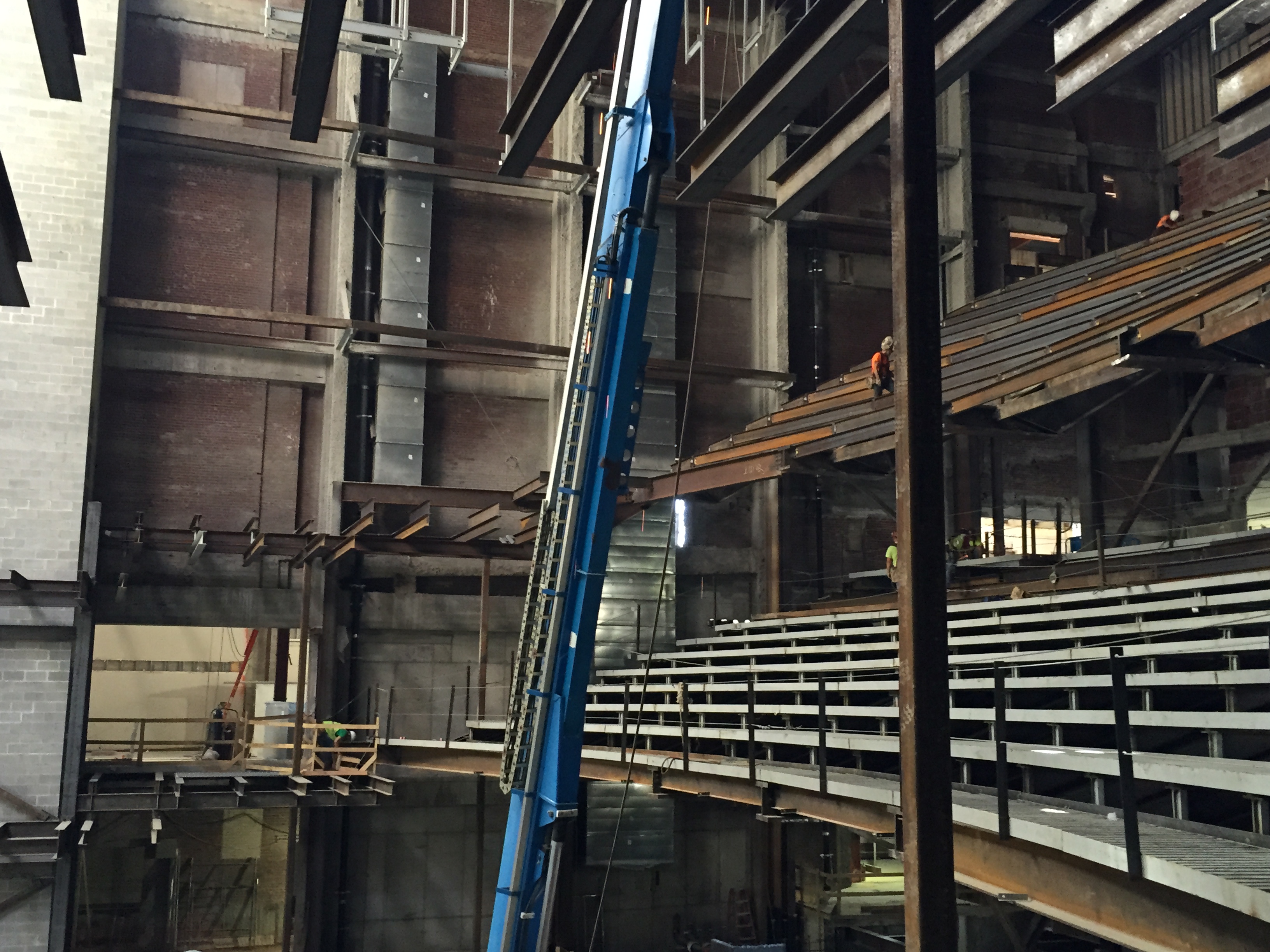 To the right, new balcony seating is under construction. Ahead, box seating is being built. 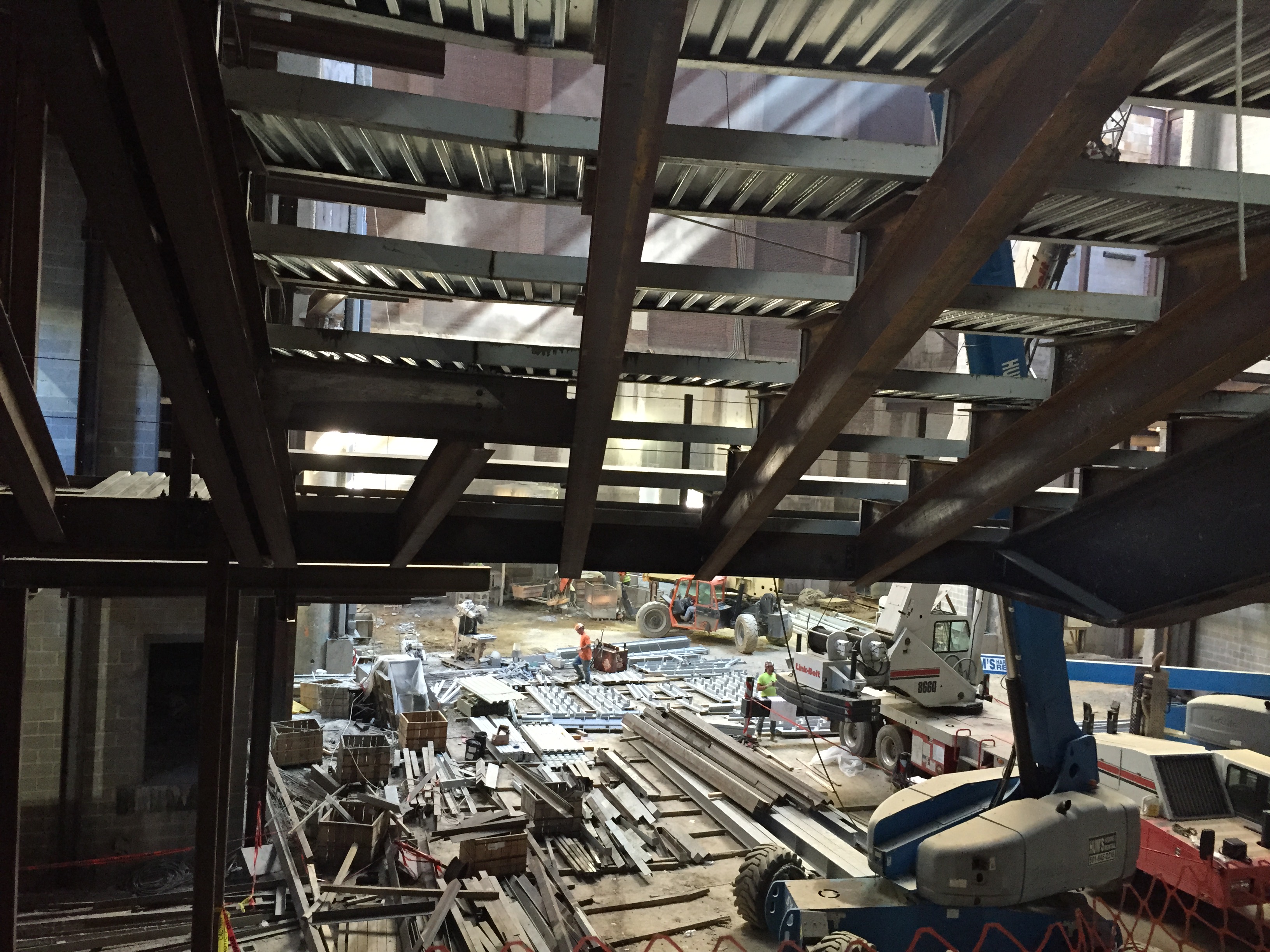 From this vantage point, a viewer is on the “street level” looking from the seats toward the stage. 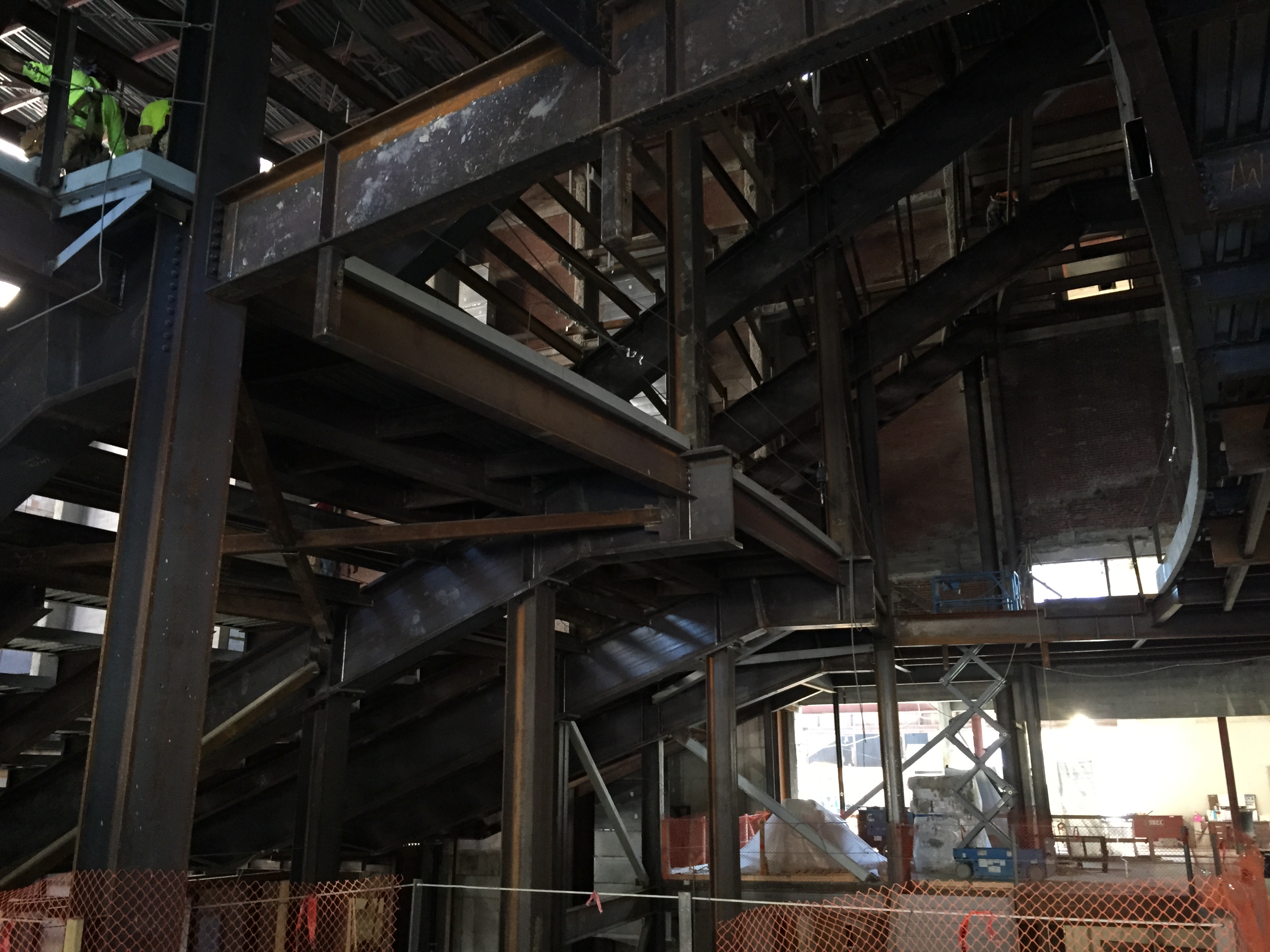 This is the future home of the centrally located grand stair, which will link multiple lobby levels. 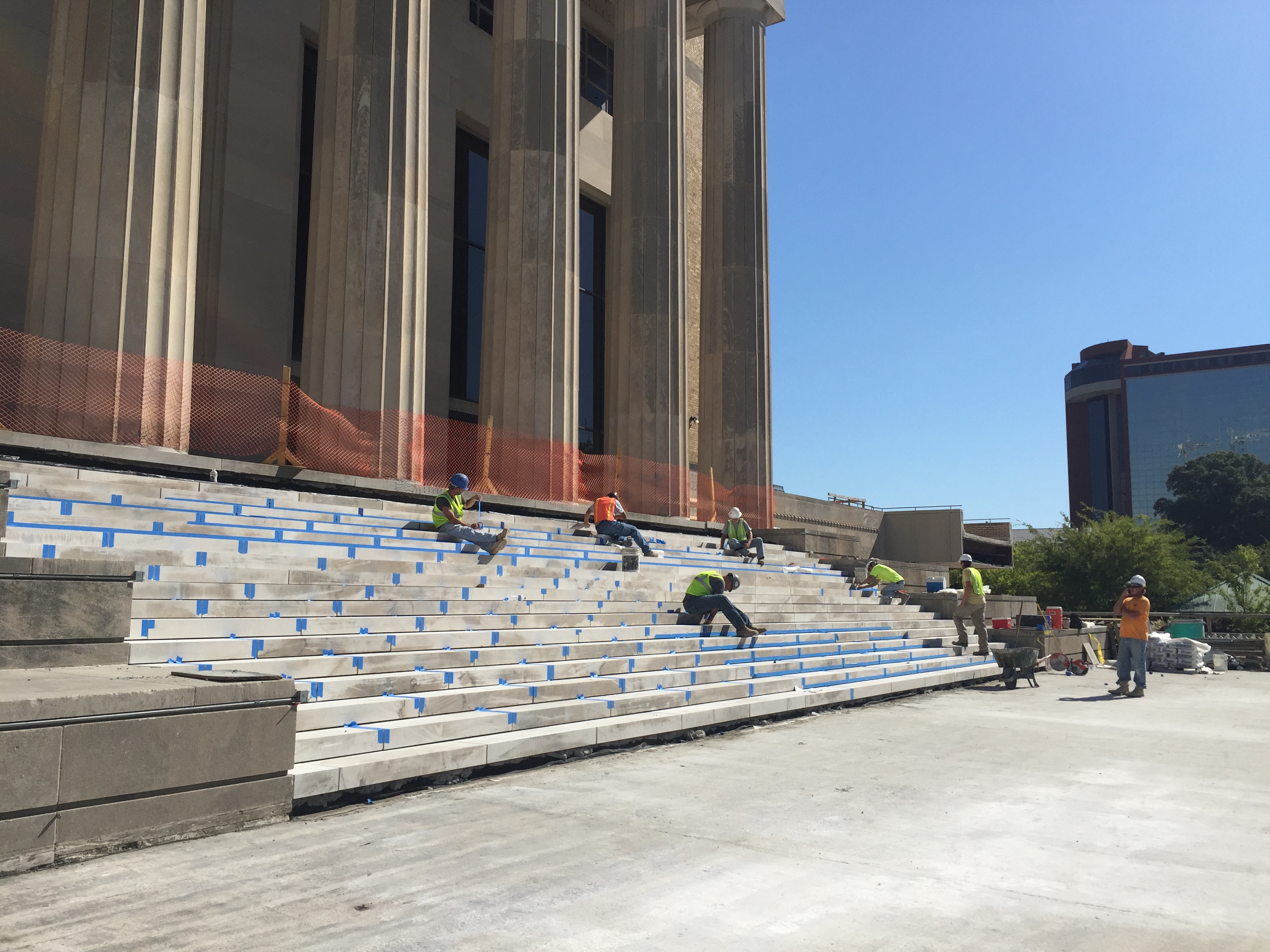 New limestone steps are underway. Improvements to Robinson Center will respect and enhance the historic structure, which is listed in the U.S. National Register of Historic Places.