A Romantic Chateaubriand for Two 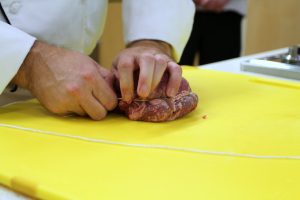 WHAT IS CHATEAUBRIAND? It’s the center section of a tenderloin of beef; perhaps the most tender of preparations. Its unique flavor comes not only in the cut but its preparation. It is always seared and roasted, and should be prepared on the rare end of the scale.

Salt and pepper to taste

Take the tenderloin cut and compress it with your hands into a large disk. Truss it so that it holds its shape. Heat the oil and butter together in a skillet. Season the steak with salt and pepper. When the skillet is hot and the oil is almost smoking, place the steak in the pan and cook until that side of the steak has browned. Turn the steak in the pan and put the pan in the oven to finish cooking (prepare sauce at this time). Remove the steak from the oven when it is done. Allow it to rest for about 5 minutes before cutting it. 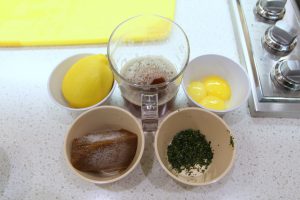 Salt and pepper to taste

Combine the wine and shallots in a pan and cook until the wine is reduced to a very thick syrup. There will be very little liquid left in the pan. 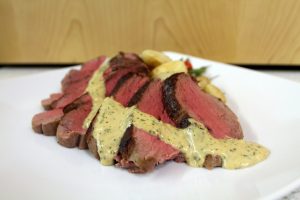 Put the egg yolks in the pitcher of a blender and season with salt and pepper. Add the wine and shallot reduction and begin to blend. Slowly stream the hot butter in until a thick emulsion sauce forms. Squeeze in lemon juice to taste and add the tarragon and Glace de Viande. Taste the sauce and adjust the seasoning as necessary.

When the steak is ready, mix in the drippings from its pan to the sauce. 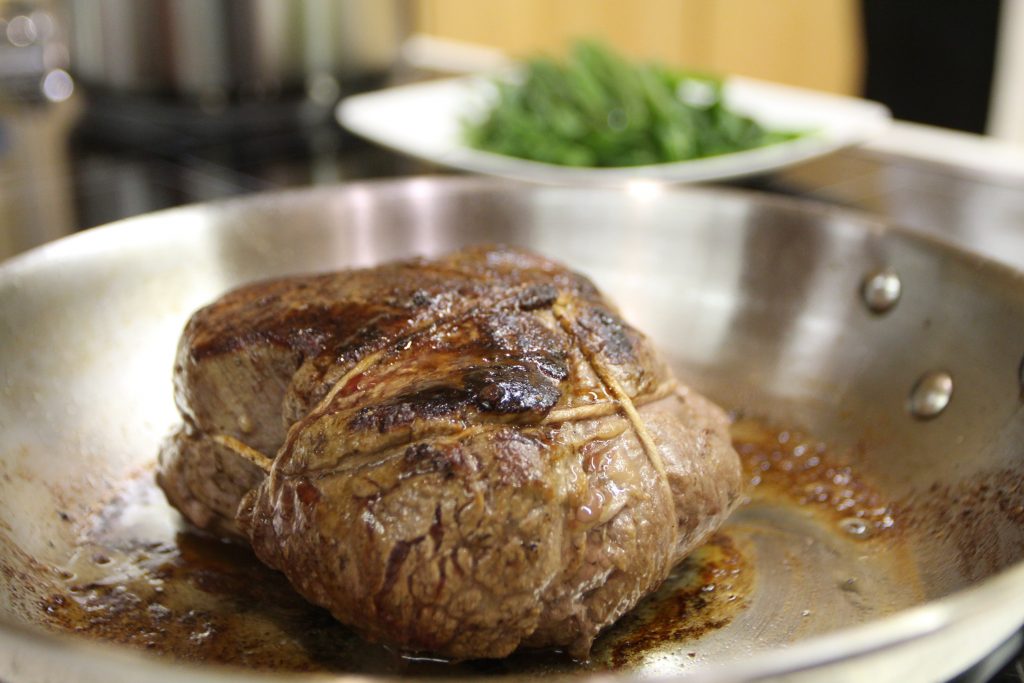 Origin of the name Chateaubriand

From François-René, Vicomte de Chateaubriand (1768-1848), a writer, aristocrat and gourmand who escaped France at the age of 25 to avoid being beheaded by the guillotine. Though almost penniless, Chateaubriand traveled extensively, giving French lessons to pay the bills. He spent nearly six months in the United States, mostly with Native Americans. His writings from his time on the Mohawk Trail and in the scantly populated American South are attributed as influential to the start of the Romantic movement in French literature. He eventually returned to France, married, served in the Royalist Army, was wounded, exiled to England, converted to his childhood Catholicism, allowed back in France, was appointed minister of Valais by Napoleon Bonaparte, resigned, given a great deal of money by a Russian tsarina, became a world-traveling diplomat, upset Napoleon and a whole lot of other people – Chateaubriand was an interesting character, to say the least.

The preparation here, though, was created by his personal chef, Montmireil, whom history only recalls today for his name and this particular steak.