Running With the Long Haulers 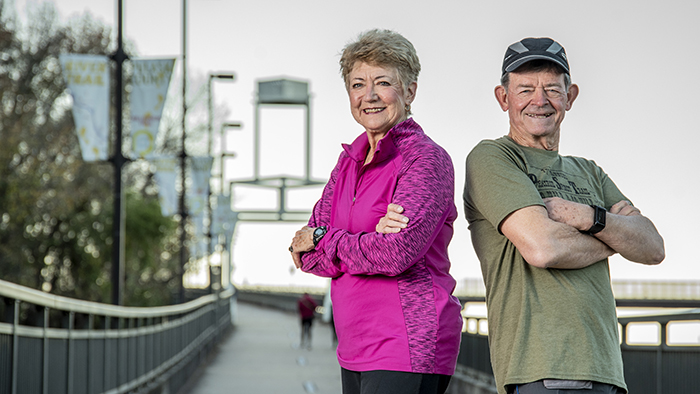 Running With the Long Haulers

Dear fellow couch potatoes — we are about to get schooled. It’s all good though. This COVID-19-induced caloric haze can’t end well for us. Little Rock’s Lou Peyton and Benton’s Maurice Robinson are two long haulers in life and sport who have plenty of motivation to share. Both enthusiastically defy their age and bodies — Peyton is 76 years young, and Robinson is staring down his 79th birthday. With their noteworthy footwork, these two runners are a part of a special breed who live to ultramarathon.

The Boston Marathon: most of us are familiar with that race. A legacy from the Greeks, a standard marathon like that is more than 26 miles; 26.219, to be exact. The legendary Tarahumara runners wouldn’t even bother to strap on their sandals for a distance that paltry. A native tribe of Mexico, the Tarahumara men — and women — routinely run hundreds of miles at a time. Sandwiched in between the marathons and the Tarahumara are the ultramarathons. Technically speaking, ultramarathons are any footrace longer than a marathon. Commonly, these races range from approximately 31 to 100 miles.

Ultramarathons consist of three types. One is based on achieving a specific distance in which participants run, walk, walk/run or in some races, wheel chair. The second type gives participants a set time — hours or days — to complete the course. Truly designed for the masochistic is the third type, known as a “self-supported race.” For the entire race, these competitors don backpacks filled with the sum total of their necessities, including food. The catch? These races can go as long as a week. Be assured this amount of misery is limited. Other ultramarathons have strategically placed aid stations. There, runners find everything needed, including strong doses of encouragement and empathy. Sincere I-hate-my-life moments are not uncommon at certain phases of these runs.

“I never liked running in high school. I didn’t like running when I started running,” Robinson says.

Colorado’s Pikes Peak did it. Robinson’s son-in-law invited him to climb it with him, which they did, even spending the night on the side of the mountain. Something about that experience sparked the inner athlete that was perhaps a little dormant at this point in his life. Before his decades as an engineer for Arkansas Electric Cooperative Corporation, Robinson had played football for what is now Ouachita Baptist University. Within two years of his Pikes Peak climb, he boomeranged back there, this time for a marathon. His athletic ability was not even remotely sidelined any longer. Among senior runners, classified as 60 or older, Robinson owned first place in that race.

Robinson’s transformation from marathons to ultramarathons was not quite as fast. Continuing to compete in various races, Robinson’s capabilities expanded until his distances, too, began to easily increase. Ultramarathons were a natural progression. But why do it at all, particularly at an age when couching with the chips could so easily be self-condoned? 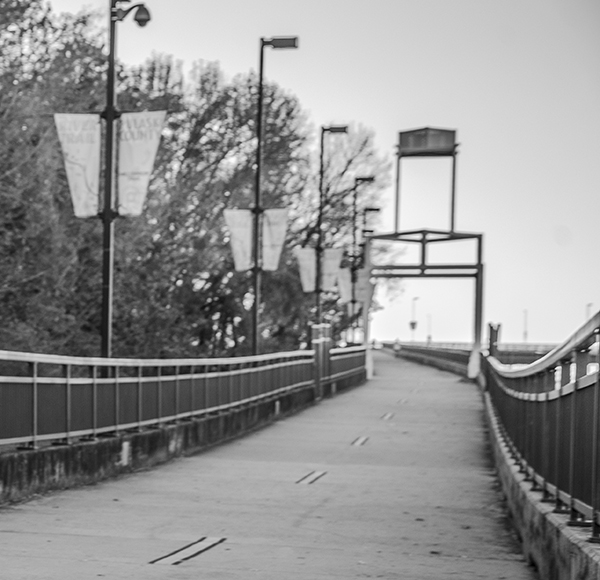 “Running long continuous distances brings forth moments in time where, in my mind, I realize that I’m doing something that I never thought I would be capable of doing,” Robinson explains. “And afterward, many times I discover according to the records that there are only a handful of people in America or even in the world that have ever done such a thing.”

That would be a fact. Last year at Kansas’ Prairie Spirit Trail 100 mile Race, Robinson finished with an official time of 28 hours, 42 minutes. That number put him in the top 10 in the world, all-time, for runners 75 and older in 100-mile races. But being 77 years old narrowed those numbers down further, resulting in Robinson actually being ranked in the top 5 in the world, all-time. Daddy got bragging rights, folks.

Thus Robinson’s logbook of races and rankings became even more impressive. His running club, the Saline County Striders, has acknowledged his feet/feats with membership in its Hall of Fame. Admittedly, racing has also brought him an addiction to and a joy for the sport. Robinson shares other traits commonly found among the ultra running community — a modesty and willingness to share the achievements of others.

“Lou is one of the groundbreakers of women running ultramarathons. She is one of the first women in the nation to finish the Grand Slam of Ultra Running,” he offers.

Like Robinson, Lou Peyton has quite literally run her way into history. While Robinson started running in his 60s, Payton started in the ’60s And that alone took some nerve.

Eyebrows were raised at the 1966 Boston Marathon when a woman — the first — ran. She sneaked in. The next year, the race’s first officially registered gender addition ran. It did not go well. The race manager stayed next to this female runner of his, but not to offer support. He actually hit her repeatedly throughout the race in an attempt to stop her from finishing. She did finish, ensuring that more women were to follow, including in 1985 with one equally tenacious Peyton.

In the ’60s, Peyton was the cultural expectation — a wife and stay-at-home mom. Well, for a short time anyway. Six weeks after Peyton became a mom, she broke out of the house and went “jogging.” At this time, running as a sport was in its infancy as well, certainly not defined, organized and marketed as it is today. “Jogging” wasn’t even a common term, and many people felt women needed to just get their sneakers straight and backtrack on home. Peyton didn’t see herself as an athlete, just a mom in need of a break.

“The reason I loved it was you couldn’t be worried about diapers or cleaning the house or what you left at home. You were just concentrating on breathing and finishing the run. It just blocked out everything, and it still does,” she explains.

Eventually, the school months allowed her to work part-time at Little Rock’s Gary Smith’s Easy Runner, a once staple for runners in the Heights. Meeting other runners fueled her dream — well, why couldn’t she run the Boston Marathon? The lottery system for determining participants slowed her down, but didn’t stop her from laying her name down on that finish line.

Mission accomplished, but it was just hors d’oeuvres for her. The next year she became an official ultra marathoner in California’s Western States 100. Mother Nature is known to have thrown down her best and worst on this course. Starting at 5 a.m., going into the night, runners literally hit highs and lows geographically and temperature-wise. The Sierra Nevada’s ascents and descents alone are enough to make a mountain goat turn tail. Payton did 80 miles her first time out, but of course, that wouldn’t do. So another year saw her adding this 100-mile victory to her list. The challenge might not have been her only reason for returning. 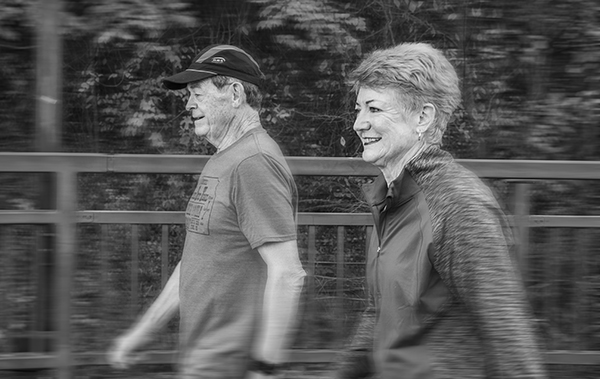 “I met women who were so very interesting,” she says.

Very interesting indeed, especially that small group of women who were plotting to run the Grand Slam. This big mama of ultramarathons requires runners to complete not one, but four 100-mile races. Did we mention? These races have to be completed within 3 months. Runners can select their races from five offered, which are in California, Colorado, Utah, Vermont and Virginia. No matter which four of the five races a runner chooses, there is no opting out of the extensive training, planning and traveling the Grand Slam demands.

“Men had been doing this for a few years, but no woman had done it,” Peyton says, “And we did.”

Having blazed a trail for other women to follow, Peyton also found inspiration of another sort. “I talked my husband into it,” she explains of their creation of the ultramarathon The Arkansas Traveller. At the Western 100, other runners kept asking, “How are you Arkansas people coming out here and finishing these 100-mile races through the mountains?” The Peytons wanted to showcase their state for these runners. But they didn’t know “… if people would come to it. And they did. They loved it.” So much so, that almost 30 years later, it remains a source of pride for the Natural State to annually host the event’s runners, who represent multiple states and countries. Peyton’s logbook, kept since 1968, is full of notations to be proud of. Here’s another reason  — a Lifetime Achievement Award from the Arkansas Ultra Runners Association.

Wow, look at you! So motivated that you’ve already got your online shopping cart full of logos designed to dazzle? Heads up: We’re about to get schooled here, too. Neither Robinson nor Peyton are focused on brands. Peyton does emphasize the importance of being properly fitted for your shoes. It’s crucial, because as Robinson explains, “In a 100-mile race, my feet will strike the ground at least a quarter of a million times on the surface, the rocks, whatever.” The legendary Tarahumara traditionally wore sandals made of rawhide, later upgraded to discarded tire tread. That first woman at the Boston Marathon, the one who snuck in? She wore white leather Red Cross nurses’ shoes. Why? Women’s running shoes simply did not exist then.

The Tarahumara women do their own thing too, like running in their dresses. Some of their men have gone western, but most still wear loose tops and a skirt — and no, that’s not an error. The practicality of the latter outfit no doubt makes for quick pit stops, something Peyton says has to be factored in, just as the need for staying hydrated. Each runner will develop a sense of what clothing will work for them.  Diet? For Peyton and Robinson, there are no special diets. Robinson, also a beekeeper, likes to add some of his own honey to his carbohydrates. Peyton doesn’t do alcohol or desserts, but as she says, “Anything else is fair game. I don’t believe in being hungry”.

Amen, sister. You have all of us chip-snorting couch potatoes with you on that. Speaking of fair game, these athletes define it differently — very differently — than those in many other sports. As Peyton suggests, “Do not train to beat someone, that’s not the point. It’s to get yourself to the finish line.”

Robinson points out the logbook isn’t his only reason for running. It is, he says, “… the social side to running. I enjoy being around the people, enjoy their support — so friendly and super nice.”

Sounds like Robinson and Peyton would be a lot of fun to hang out with. But maybe running just isn’t where your tootsies are going? That’s fine too. Like the old Nike ad says, “Just do it.” Walk, dance, rollerblade, bike … Whatever your inner child whispers is probably going to be just perfect for you.

OK now, fellow couch potatoes, who is ready to race me to the mailbox? If we’re really lucky  (meaning we still have a pulse upon arrival) we might just spot some super cool long hauler breezing by. I stand to be schooled.

READ MORE: Making The Most Out Of The Arkansas Outdoors