Runway for a Cause Celebrates 15th Year

Sissy Jones has supported Komen fundraisers for years. In 2015, she became part of the cause.

“I never thought I would be one of those people benefiting from it,” says Jones, founder of the iconic, family-owned jewelry store chain Sissy’s Log Cabin. Sissy’s is a presenting sponsor of this year’s Runway for the Cure, a fashion show held to raise money for the Arkansas affiliate of Susan G. Komen.

Jones, who has been in remission since March, will be among the 49 breast cancer survivors who model fashions from local retailers, including Feinsteins, Vesta’s, Outlets, Dillard’s, Indigo, Steamroller Blues, Kristin Chase, Beyond Cotton 2 and Companions.

The annual luncheon and style show – the brainchild of Vicki Vowell, CEO of Vowell Inc., the parent company of AY Magazine – is set for 11 a.m. to 1 p.m. Thursday, Sept. 14, at the Clear Channel Metroplex.

A Special Day for Survivors

As a model, Jones will be served lunch and offered a mimosa or a Bloody Mary. Someone from Paul Mitchell will style her hair, she will have her makeup done and be dressed in beautiful clothes, and she will have a chance to bond with other cancer survivors.

Breast cancer steals your health, your calm and even your hair. This event aims to empower women who have fought it. As the Komen motto this year says, they are “More Than Pink.”

Jones was diagnosed with triple-negative breast cancer in 2015 after she noticed swelling under her arm and went in for a biopsy.

“It was as bad as you can have and it was in the fourth or fifth stage by then,” she says. “They scheduled the surgery for the next Tuesday, as quick as they could.”

Jones’s son, Bill, called the director of the Boston University School of Medicine Cancer Research Center and had a plane waiting to take her there for treatment that very day, but she opted to stay close to home, seeking care from her friend Dr. Omar Atiq at the Arkansas Cancer Institute in Pine Bluff.
She took Adriamycin, known as “Red Devil,” and then suffered a bad reaction to, ironically for a jeweler, the platinum in a new drug combination Atiq and his colleagues at the University of Arkansas for Medical Sciences and M.D. Anderson developed for her.

“It’s a journey you have to go through and sometimes the valleys get awful dark and awful muddy, but you know you can get out of it if you just keep trying,” she says. “You’ve got to keep a positive attitude through this or you will not make it.” 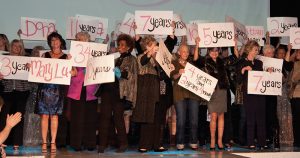 Breast cancer survivors walk at a previous Runway for the Cure event. The women hold up signs showing the amount of years they have been survivors.

Amy Stephens, Runway chairman, knows first-hand how difficult the journey can be. She was diagnosed in 2008 with invasive ductal carcinoma, discovering a lump in her breast when her daughter accidentally kneed her getting into bed to read a story.

She was nervous the first time she modeled, battle-weary and self-conscious, her hair still not having grown back. She didn’t know many of the other women and the idea of walking the runway in front of all those people made her anxious.

“It was a little nerve-wracking,” she says, “but it was the best experience.”

A meet and greet is now held for the models a month or so before the show so they can get to know the other survivors they will be walking with.

“I met a girl my first time and she’s one of my favorite people ever,” says Stephens.

First-time Runway model Bill Robertson of Bradford is feeling a bit anxious about his debut, even about the meet and greet.

“I won’t even be able to take my wife,” says Robertson, the first male breast cancer survivor to model for the event.

Robertson felt a lump in his breast in early 2010 but concluded it was nothing to be concerned about. He was working for the National Cotton Council in Memphis then and went on a business trip to China, and after giving a presentation he went back to his room and noticed a dark stain on his shirt.

“I thought my pen had leaked but then I realized my pocket was on the other side,” he says.
Robertson isn’t sure what he will wear on the runway. In his day job he works with growers through the University of Arkansas Cooperative Extension Services and he and his wife have a farm with cattle, sheep, poultry, rabbits, pigs, goats and more. His typical “uniform” is a long-sleeved shirt, Wrangler jeans and boots.

“I strive to buy 100 percent cotton because I really love cotton,” says Robertson, who stopped shaving and cutting his hair when it began growing back after treatment. He now has a bushy beard and is growing his hair out for donation to Wigs for Kids. “Whatever they give me to wear I’m just going to smile and try to walk the way they want me to walk. I think it’s a great cause. It is going to be an experience that gets me completely outside of my box.”

Suzanne Guymon, who heads up the model committee, decided to volunteer with the event while she was working for Dillard’s and dressing models for the show.

“We really want every woman who is willing to be able to have this experience because it is such a special experience for them,” Guymon says. “They’ve been through so much but there is just this feeling of joy and their passion for life is infectious and contagious.”

Faith for a Cure

Lifting people’s spirits is Sissy Jones’s goal. She has plenty to be down about. Three months after her diagnosis, her husband, Murphy, was told that he, too, had cancer. He lost his fight in April.

“My husband was a great cheerleader for me. He really kept me going,” she says.
But she is grateful for the time they were quarantined together, seeing only each other, their family and healthcare professionals.

“These 18 months were the most calming time because even as bad as it was, it was time that I got to spend with him, getting to know him on a different basis than I did before,” she says. “There’s always a silver lining on every cloud.”

Jones lingered in treatment rooms, offering encouragement to other patients. “There were people there who were much worse off than I was. I met so many nice people. I started giving out gift cards for Sissy’s Log Cabin,” Jones says.

She keeps in touch with many of the friends she has made along the way. She hopes to meet people through this event, too. “I like to do that,” says Jones. “And I believe in this. We need a cure.”

Giving Back to Arkansas

Runway for the Cure raised $90,000 last year. “Seventy-five percent of the money will stay right here in Arkansas. Through a grants process, service providers use the funds for mammograms, treatment, education and survivor support services,” says Sherrye McBride, executive director of Komen Arkansas. “The other 25 percent is pooled with all the other Race for the Cure Affiliates to fund research to find better treatments and ultimately to find the cure for breast cancer. This past spring, we granted over $662,000 to local service providers and gave over $321,000 for research.” 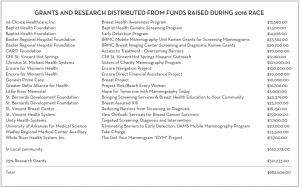