By Kody Ford | Photos by Kat Wilson
Northwest Arkansas artists bring a 300-foot-long wall to life with new mural on College Avenue.
As Arkansas comes to embrace public art as not just an urban adornment, but rather a true way of expressing the culture, it seems like almost every week photos pop up on Instagram or Facebook of a new project. Fayetteville, while initially behind the curve, is quickly catching up.
Fort Smith’s The Unexpected brought a taste of international flavor to Fayetteville when the group had Alexis Diaz paint a meticulously detailed (and free-handed) owl on the remaining wall of the old Mountain Inn. Experience Fayetteville teamed up with JustKids, The Unexpected’s curators, for Green Candy last summer, which not only brought big names like Bordalo II to town, but also embraced Northwest Arkansas artists like Jason Jones and Gina Gallina. A tribute to the Cherokee and the Trail of Tears popped up on the Razorback Greenway in 2017, skillfully crafted by artist Stacy Bee. Now, College Avenue is getting a dash of color thanks to artists Matt Miller and Cannon McNair.
A staple in the Fayetteville scene for years, Miller’s studio on the Downtown Square has often hosted events and he has generously donated works to charities as he has built up his name in the region. Acrylic is Miller’s go-to medium and he paints strong subjects that hint at introspection. He describes his work as “vibrant in color, abstract by nature, curious in concept and reflective by subject.” 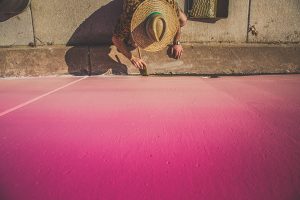 McNair tipped Miller off about the project shortly before the deadline.
“We sat down, talked about why we wanted it, visited the space to find out what it truly needed and went from there,” says McNair. “The first step was the ‘Why.’ We wrote everything from Matt’s personal perspective as he has the art career everyone knows here. We dove into why that wall needed calming colors and simple shapes: people are in a hurry on that stretch of College Avenue and we wanted to calm them down with a little color therapy. Each piece has a meaning, and we supported each design with an example of Matt’s work [for the application].”
It was the duo’s second time planning a project together, but their first acceptance. According to Fayetteville Arts Council President Donna Smith, the city received over 40 entries from local, national and international artists. Of that group, three were selected to submit more detailed renderings of their ideas. The pair took the feedback from the arts council and found a compromise for their piece. Then they came out on top.
At 300 feet long and 1,600 total square feet, Miller decided to be ambitious with his 10th mural. The design needed to focus on the space and what it needed. “Considering over 28,000 people pass by in their cars daily, it is quite a hectic space,” he says. “We wanted it to be a functional aesthetic, engaging a moment of calm for the onlooker and something to look forward to on their commute. The theme of the mural is that ‘Nature does not hurry, yet everything still gets done.’” 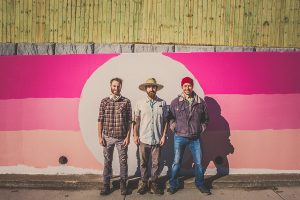 Northwest Arkansas artists Matt Miller, Cannon McNair and Jason Jones stand in front of their work-in-progress on the busiest strip of College Avenue.

Some delays pushed the painting back to winter, which has caused the painting process to go somewhat slower than they had anticipated. Still, they weren’t discouraged. After enlisting Jason Jones, another veteran muralist, the three artists took to the street – or the sidewalk in this case – brushes in hand. Miller credits Jones’ assistance and expertise for making the process run smoothly.
“The painting process is the easy part for me,” says Miller. “It is also the most fulfilling aspect too, which is why it probably feels easy. Once the paint is on the brush, it is just one step at a time, really.”
The only hurdle they have run into is cold, and sometimes humid weather. The paint they use must be applied in low humidity and above 50 degrees. So far, they have spent under a week painting throughout December and January, but they’re hoping for sunny days in February so they can wrap up the project.
McNair is proud of the addition they’re making to the cultural landscape of Fayetteville. “Art helps us appreciate our spaces, our people and our freewill to let our weird ideas out of our minds,” he says. “Public art should be sacred to the people. It started with the Native Americans, right? We’re just an extension of them, drawing on caves, but our paint and caves have advanced since those days.” 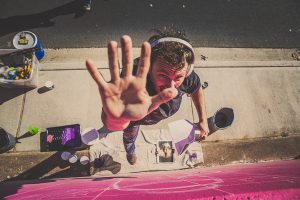 Molly Rawn, director of the Fayetteville Visitors Bureau, is proud to see another addition to the murals around town and feels it brings the city attention. She says, “Public art makes our city more attractive to guests, who come here to experience our unique culture, which includes a vibrant arts scene. It helps draw attention to other aspects of our artistic culture, such as the performing arts and live music offerings.”
For the artists, this wall isn’t just another aesthetic benefit to the city, but a way to start a conversation.
“This mural will become a part of our history, our folk, one of our most visible expressions of who we are as a community,” Miller says. “I am using vibrant color to represent a thriving ecosystem and imagery that represents a reflective culture. I enjoy creating art because it is truly the window to the human conversation. This mural will give pause to the hustle and bustle of our city and create a moment of inspiration that one can carry throughout their day. I hope it inspires anyone that holds creativity within them to express it in their own unique form.”