The rivalry between Saline County’s two largest cities, Benton and Bryant, touches down at War Memorial Stadium, on Friday. The theme of this year’s 45th annual Salt Bowl has been dubbed “Salty Tradition” by the committee in charge of the clash.

Despite their geography as next-door neighbors, this high profile head-to-head matchup has not always existed. Back in 1973, Fort Smith Southside dropped out of a contract with the Benton Panthers, and the Bryant Hornets, following recent promotion to 3-A, were in the market for a new rival. The two schools agreed to play each other the following year.

But the best rivalries are not made with a pen and pad. They need a little history or, if you will, some “seasoning.” And the night before their first matchup, that is exactly what the school’s got.

On September 19, 1974, a group of students from Bryant doused the Benton High School’s panther statue with pink paint. Not to be outdone, Benton retaliated by dumping a mound of pink marshmallows onto Bryant’s football field from a helicopter. When the two finally met on the gridiron on September 20, Benton’s band had found a new fight song: the Pink Panther theme song. Over the years, Benton has continued to play this song after every touchdown they score against Bryant. Though the scoreboard in 1974 was a 28-0 thrashing in Benton’s favor, a rivalry was born. 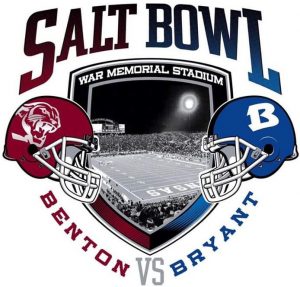 By 2000, the popularity of the affair had reached such a scale that neither of the two schools could host the game anymore. They needed a bigger salt shaker, as it were. Both parties agreed that future iterations of the rivalry would commence at War Memorial Stadium. But it needed a name… Salt Bowl, honoring the county’s 19th-century salt making.

And the antics of fuel that ignited this rivalry did not stop 45 years ago. Over the years, ammunition has not been hard to come by. Just in this decade, a $30,000 panther statue was vandalized in 2016, and last year a fight broke out at the stadium that led to a knocked over barricade being misunderstood as gunfire, resulting in a chaotic flood of 38,000 people fleeing War Memorial.

The Benton Panthers dominated the pre-Salt Bowl era, winning 22 of the 26 games from 1974-1999. From 2000-now, since it officially became the Salt Bowl, the Bryant Hornets have won 15 games to Benton’s two, and there have been two ties. The game has become the highest attended high school football game in Arkansas each and every year.

This year’s Salt Bowl is on Friday, August 30, at 7:30 p.m. Tickets can be purchased for $12 at Big Red stores (which includes a free t-shirt), or at the stadium box office on the day of the game for $15 (and no t-shirt). Specialty tickets like indoor club level and VIP parking passes can be bought from either the Benton or Bryant Chambers of Commerce.