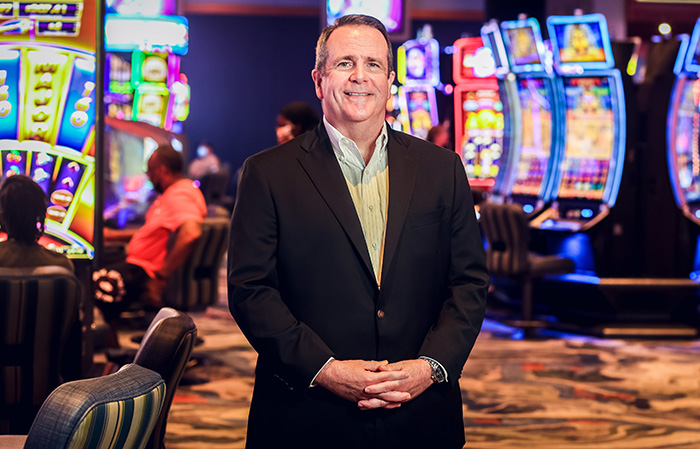 Matt Harkness has decades of gaming experience under his belt, from the craps tables in Atlantic City to the slot machines of Trump Plaza. It’s no surprise, then, that as the general manager at Saracen Casino Resort in Pine Bluff, the gaming world in the southeastern corner of the state is seeing unprecedented success.

Harkness has been working in the industry for more than 40 years, having started in 1979 as a craps dealer in Atlantic City, New Jersey. After a 25-year stint, Harkness would go on to build up the gaming scene at Trump Plaza, the last five years of which he served as the general manager. The Four Winds Casino in Michigan would become his next home. After working overseas and in Las Vegas, he was eager for a new opportunity. Then, his phone rang.

“I met with the Quapaw Tribal Council, which also acts as the Saracen Development Authority, and started in October of last year as the general manager of Saracen,” Harkness says.

He shares that before his latest career opportunity, he had never been to Arkansas but was reminded of his childhood home in the Carolinas, and soon found himself feeling at home.

Met with a new task at the start of every shift, Harkness is thankful that his job allows him to meet with so many different groups of people and departments.

“The fun thing about this job is that it really is different every day,” he says. “I work with all of the different departments and areas. I’ve been a general manager and chief operations officer for 20 years now, and meeting with people is the part that I really enjoy. You get to learn about what’s going on with your staff and operations. But the most important part of what I do is trying to figure out what our staff’s needs are so that we can best deliver to our guests, so I meet with our employees often. A manager’s job is to figure out what exactly their staff needs — whether that’s tools or motivation — in order to get the job done properly. All of that leads to a great guest experience, which leads to repeat business.”

Harkness acknowledges that several factors make Saracen unique, including ownership by a tribal nation, access to major interstates, a gorgeous drive on the way to Pine Bluff and state-of-the-art dining and lodging — unlike anything the state has seen before.

“The staff that we have here is invested in the well-being of Saracen because they’re local,” Harkness says. “This business helps the community to succeed, and it helps our staff members as individuals. Additionally, there is not a lot of gaming opportunity in this area, so Saracen is a tremendous opportunity for people. It will be a great career for many people, and it’s been a great career for me.”