Searcy Needs Your Vote for the Small Business Revolution Competition 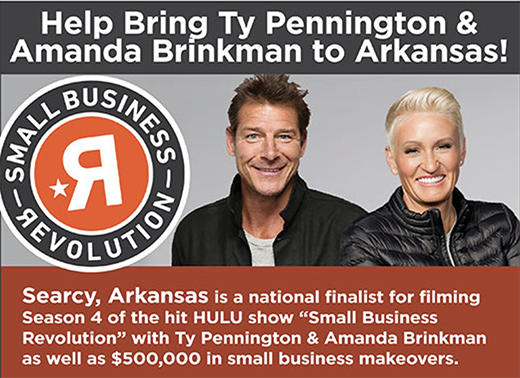 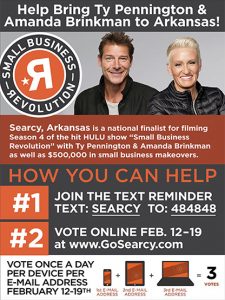 How to vote for Searcy

One Arkansas town is poised to make its small-screen debut soon.
Searcy is in the final running to win a spot on season 4 of Small Business Revolution, the Hulu show starring Amanda Brinkman and Ty Pennington. Small Business Revolution and Deluxe announced today that Searcy is one of the top six finalists for the show.
Now, it is up to America to decide the winner of the competition. You can now visit Deluxe.comto cast your vote for your favorite city to win. In fact, you can cast multiple votes per day, according to Mat Faulkner, president of Think Idea Studio in Searcy. Voters can cast up to three votes per day – they can cast one vote per e-mail address and per device in a day.
“[The] nationwide vote for the top city will also start February 12 and go through February 18. Anyone is able to vote three times every day during this time from any device,” Faulkner says. “If we make the top five, it goes to national voting. We’ll have a week of intense of voting and then the top community is really based on the top number of votes.”
Thousands of towns were nominated to participate in the program, and now only six remain.The other five cities stretch across the map of the United States. They include Cama, WA.; Cañon City, CO.; Corsicana, TX; Durant, OK; and Washington, NC.
Voting last one week and ends Tuesday, February 19, at 10 p.m. (CST).
“We’re going to need everybody to help fight for us and vote for us. It’ll be a great shining light on Arkansas and Searcy specifically,” says Faulkner.
If Searcy is chosen, the city will be featured in eight episodes and several Searcy small businesses will get a makeover that will help revitalize the town’s Main Street. A panel of celebrity experts will be brought in to provide makeovers on the show.
City leaders are hopeful about the competition but are calling on Arkansans to support the city. If they win, these leaders hope to show the resources Searcy has to offer.
“We need to show that we have support all over the country,” says Buck Layne, President of Searcy Regional Chamber of Commerce. “Being showcased on a national level in the Hulu series would put Searcy and our great small businesses on the map!”
Click here to cast your vote for Searcy.
Additional writing and reporting by Tyler Hale
By Matthew KingFebruary 12, 2019
Share this post
Share on FacebookShare on Facebook TweetShare on Twitter Pin itShare on Pinterest Share on LinkedInShare on LinkedIn Share on WhatsAppShare on WhatsApp