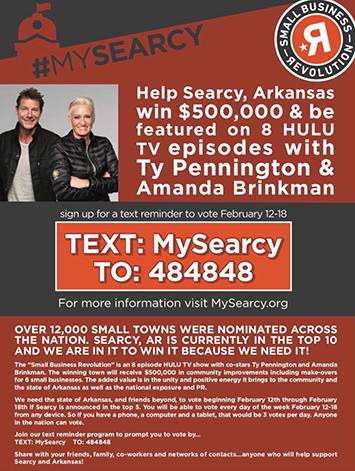 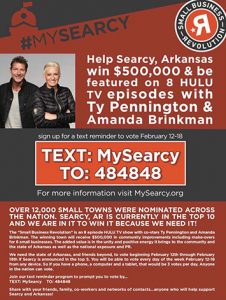 Searcy recently made the cut for the top 10 cities for the Hulu show Small Business Revolution starring Amanda Brinkman and Ty Pennington. The winning city of the Small Business Revolution competition will be featured in eight episodes for the show’s fourth season.
“Searcy is the only community to represent Arkansas, so this definitely will be a statewide push…reaching out to those outside of Arkansas especially once it gets to the voting stage,” says Mat Faulkner, president of Think Idea Studio.
Since the announcement, producers from the show have come to Searcy to meet with business owners and city leaders to get a better understanding of the community and what their needs are. Searcy officials are currently waiting to know if they made the cut for the top five.
“They choose who the top five are,” says Faulkner. “[The] nationwide vote for the top city will also start February 12 and go through February 18. Anyone is able to vote three times every day during this time from any device. If we make the top five, it goes to national voting. We’ll have a week of intense of voting and then the top community is really based on the top number of votes.”
The top five cities will be announced on February 12.
“We’re going to need everybody to help fight for us and vote for us. It’ll be a great shining light on Arkansas and Searcy specifically,” says Faulkner.
To get text reminders to vote, text “MySearcy” to 484848.
“We need to show that we have support all over the country,” says Buck Layne, President of Searcy Regional Chamber of Commerce.“Being showcased on a national level in the Hulu series would put Searcy and our great small businesses on the map!”
For more information, visit Searcy.com’s landing page here. Also visit the Deluxe Corporation siteto learn more.
READ MORE: Searcy Advances to Top 10 in Hulu Series Competition