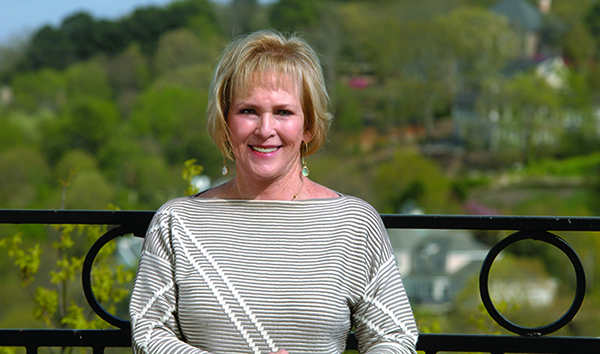 Like many people involved with Ronald McDonald House Charities of Arkansas, Donna Clark has never had to utilize the services the organization provides. She’s never sat in a NICU (neonatal intensive care unit) hospital room and watched her gravely ill infant hooked up to a babbling gallery of machines; never had to make do with a waiting room settee and vending machine food for days on end; or clutch her hands in prayer that her child lives through the night after an invasive surgical procedure.

But what Clark does have is two healthy adult children and three healthy grandchildren, and that’s enough to inspire the former teacher to pour herself into the mission of Ronald McDonald House.

“I look at my grandchildren and their healthy little selves and think, ‘I’m so lucky that my family never had a need of a Ronald McDonald House,’” she says. “There’s really nothing more dramatic than that; I just thought the organization did good stuff.”

And in return, Clark has done good stuff for the organization — and lots of it. Over the past five years, she’s been an active supporter of Ronald McDonald House, which provides a home away from home to families of children receiving medical treatment in Little Rock. For three of those years, she’s sat on the organization’s Board of Directors, distinguishing herself as a rainmaker when it comes to fundraising, from cookies and milk with Santa at Christmastime to resuscitating a social event affiliated with the group’s golf tournament.

“The annual golf scramble had always been accompanied by a party the night before the tournament,” she says. “It had gotten progressively less and less interesting, less and less well-attended and less and less exciting. It was more trouble than it was worth.

“I suggested we either need to just not have anything or break loose and do something really fun, which is what it had been years ago. It worked like a charm; we hit upon the idea of doing a casino night, which turned out to be a $40,000 success. So, that’s my big claim to fame.”

Clark says the organization has a stellar record of fiscal responsibility managing the funds that are raised. That and connection to the staff is what’s inspired her to participate at the level she does.

“The statistics that are published about Ronald McDonald House indicate that all the money goes where it’s supposed to,” she says. “They have that reputation, and so people are just happy to get on board, usually, with anything that we do.

“I can’t talk about my participation, honestly, without mentioning [executive director] Janell Mason. We clicked the first time I ever met her. She would say she’s encouraged me, and I would say she prodded me, but nonetheless, she’s pointed out many opportunities for me to be involved. It’s just one of those feel-good kinds of things where there aren’t any downsides.”

Mason doesn’t hesitate to reciprocate praise. “When I need fresh eyes on an idea, Donna is one of my go-to people. She’s not afraid to say ‘are you serious,’ followed by three solid reasons why it’s a ‘no.’ The next time she will say ‘I’ve been thinking’ and I know she will share some great ideas. Donna makes things happen, as evidenced by several new programs here. Everything she does is for the families, and I love her for that.”

For all that’s been accomplished, challenges still abound, especially in the midst of a pandemic. Safety concerns related to coronavirus radically changed Ronald McDonald House’s operations for a chunk of 2020. And while those operations are slowly getting back to normal, the group’s ability to fundraise — through events and otherwise — remains severely limited.

It’s a situation that Clark, who chairs the organization’s Development Committee, knows all too well.

“I think what’s most misunderstood about Ronald McDonald House is that we are not supported by McDonald’s,” Clark says. “Most people think because it’s called the Ronald McDonald House that we are. Now, we do get support from the local franchisees and from a global perspective as well, but it’s not near what the budget requires. All of our little fundraising activities are what keeps this house afloat.”

“A lot of the ongoing programs that were to the benefit of Ronald McDonald House and families had to be suspended. We had Ronald’s Red Carpet, a boutique we opened every other week with donated new clothes for the ladies to shop. If they left home in the middle of the night with nothing, they could come get outfits, clothes, in addition to just doing something ‘normal.’ We can’t do that right now, and I think that’s sad. A lot of people miss those things.”

Earlier this year, Clark was honored for her service during Chocolate Fantasy Ball, Ronald McDonald House’s main annual fundraiser. And while the recognition was nice, she’s far more consumed with future galas, not past ones.

“The big question mark in everybody’s mind is, ‘Will we be able to have The Chocolate Fantasy Ball?’ That’s a huge source of our revenue in any given year. If we can’t, then what do we do to make up for it?” she says. “I feel a really strong responsibility to help figure that out. That’s mostly what pushes me.”