Shepherd to the The Lambs

Rev. Jay Clark stood in the Pulaski Heights United Methodist Church pulpit and scanned a sea of grief-stricken faces gathered to mourn a young member of the congregation who took his own life. It was a human landscape he’d surveyed before, made up of the people left behind struggling to understand.

The last time he stood up here to preach under these circumstances, he was numb from head to toe. This time, he was mad. He charged the living to learn from the dead, to love one another enough to ensure this never happened again.

That sermon turned into what he now calls 3People4Life, a mission developed by congregant William McCaslin and Clark, the longtime youth pastor, husband and father. Today, on the back of his business card, there are blank lines for writing down those three life-saving names and numbers. He hands them out like candy on Halloween, those business cards, tokens that rest as lightly in his hands as his ministry sometimes weighs on his heart.

“Suicide always just turns your world upside down, as you can imagine,” he says. “Not only for that family, but if they’re involved in the church, the church family as well and especially kids that are trying to make sense of what happened. We’ve experienced that a few times during my years.”

Clark has been in youth ministry for 30 years, 12 of them at Pulaski Heights. In that time, he’s watched other interests and activities steadily encroach upon Sunday attendance, seen the rise and influence of social media yes and, buried young people whose despair cloaked the redeeming light of Christ he’d worked so hard to radiate to them.

In many ways, his role still fits the archetype:  A gentle, patient adult who leads young people to a life moored to faith through youth gatherings, summer adventures and other activities. In other ways, he’s become a surrogate father figure and mentor to his charges on topics secular as well as sacred.

“I always tell kids or even parents, I remind them I’m not a professional when it comes to being a counselor,” he says. “I’m a professional listener. It’s mostly letting them have an outlet to talk about what they’re experiencing and sometimes say things for the first time. Then we talk about where to go from there. It’s a big step when they realize that they have an issue that’s big enough to talk to someone outside their family unit.

“I try to encourage other youth ministers and pastors never to say they’re a counselor because it gives the wrong impression. For many generations, including mine, going to see a counselor was taboo. Now, I want to say, it’s commonplace. It should be on everyone’s radar to have a venue to release what’s inside of them.”

Not all of the conversations he has with his young charges rise to the level of crisis. Some of the rap sessions he conducts with kids are just helping them sort out their feelings on a given topic or giving them the means to grasp how faith fits into real life. He’s learned to be prepared for a little bit of anything.

“I always tell a story about a senior high girl several years ago; she was probably a tenth-grader,” he says. “She came into my office and said, ‘I have a question for you. There’s nothing I can do that would separate me from the love of God, right?’ I said, ‘That’s right. That’s what I believe.’ She kind of smiled.

“And I said, ‘But don’t you want to meet God halfway?’ She thought about it for a minute and said, ‘Yeah, I guess that would be what I should do.’ I said, ‘Well then what are you going to try to do that’s going to remove you from the love of God?’ There’s not anything that can do that, but you should want to try a little harder when you have a relationship with God and say you’re a Christian. You should try to walk the walk and talk the talk, too.”

Clark says most people would probably be surprised at the top thing dragging at kids’ spirits these days. 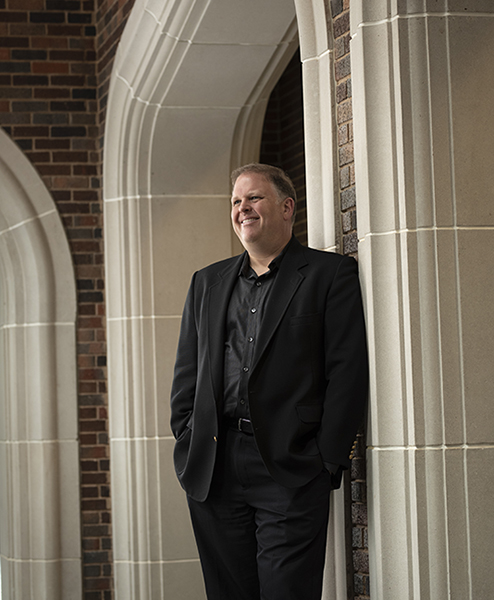 For many generations, including mine, going to see a counselor was taboo. Now, I want to say, it’s commonplace. It should be on everyone’s radar to have a venue to release what’s inside of them.

“Stress also comes with society’s assumption that because kids are churched, they don’t feel the same insecurities or need the same attention as their peers. The problem gets worse when a family places more value on their reputation than being transparent and asking for help.

“We have a good range of diversity at this church, but we are in an affluent neighborhood and sometimes that brings a different set of problems,” Clark adds. “I want to say that we take every problem seriously, but the biggest thing is that when some families are more affluent, they are more guarded. They don’t want to air their dirty laundry.”

However, of all the families Clark has reached out to or tried to counsel, the vast majority have welcomed his efforts, even if it has taken some coaching along the way.

“Parents appreciate having another adult; they always say it takes a village, whether it’s teachers or pastors or friends’ parents because parents can’t raise kids on their own anymore,” he says. “But parents need to have some trust too and say, ‘This is going on with my child,’ and not wait until it’s too late. Don’t wait until it’s in crisis mode. Let us work with you from the beginning when you first notice it. There’s no embarrassment there, even though some parents want to keep things under wraps and take care of it in-house.”

As Clark’s son has gotten older – he’s now 12 – the pastor has joined the ranks of parents taking things one day at a time when it comes to raising a family. Like many of the people he serves as a minister, Clark worries about the amount of time his son spends on video games or online and how to balance that with other activities and interests. He strives to maintain in his household the same lines of communication he’s honed with other peoples’ kids. With each new experience, he gains a measure of perspective that makes him that much more effective shepherding his young flock.

But there’s one foundational element to his vocation that’s never changed, he says, a singular tenet that has proven sound throughout a career that began in his teens.