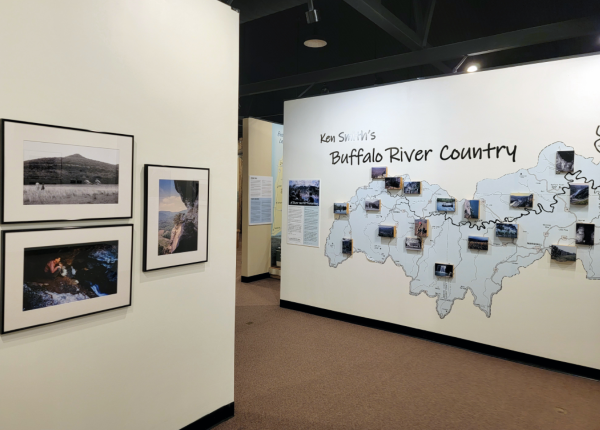 Shiloh Museum of Ozark History has announced the presentation of Ken Smith’s Buffalo River Country in observance of the Buffalo River’s 50th anniversary. This exhibit celebrates the work of those inspired by the Arkansas Ozarks waterway.

Running through Dec. 31, the exhibit showcases photos and artifacts from the Buffalo National River during Smith’s survey and watershed in the 1960s. Twenty two of the 24 photographs are Smith’s. Smith also released a book, The Buffalo River Country, in 1967.

Smith’s book brings awareness to the watershed, published in The Ozark Society, photographs, maps and trail narratives played a role in the mission to have the Buffalo designated as a national river — the first to be granted this distinction.

“This exhibit is a celebration of the work of the many people who were inspired by the beauty and importance of the Buffalo River to advocate for its preservation and exploration,” says Angie Albright, director of the Shiloh Museum. “Ken Smith is one of the dedicated people whose work on the ground and in print helped bring this first-of-its-kind designation to Arkansas and our beloved Buffalo River.”

The gallery will also include a 12-minute video of Smith displaying personal items, including his Leica camera, his Olympia portable typewriter, pen and ink illustrations, a report for the Nature Conservancy about the Clark Creek Watershed in Newton County and tools he used for building trails for the Buffalo National River in 1985.

To learn more about this exhibit or the Shiloh Museum of Ozark history, click here or call 479-750-8165.