By Joe David Rice  |  Photography by Meredith Mashburn
Students of the Bible may recall a reference to the Pool of Siloam, an ancient water source near Old Jerusalem. Some 2,700 years after its construction and about 6,725 miles to the west, American pioneers establishing a townsite along an attractive, spring-fed creek in northwestern Arkansas turned to the scriptures for inspiration, naming their community Siloam Springs.
Much like the original Siloam, its namesake in Arkansas developed a reputation as a fount of healing waters. Although the initial settlers in the area put down their roots in the late 1830s, the town wasn’t officially platted until 1880, about the time the first health resort went into operation. Speculation that a rail line would soon pass through the community contributed to a flourishing economy, driving the town’s population to 3,000 within the year. When that rumor proved to be unfounded, fully half of the residents moved away.
But the arrival of the Kansas City, Pittsburg and Gulf Railroad (now the Kansas City Southern) in Siloam Springs in late 1893 was a vote of confidence, triggering a building boom in the city’s central business district — and many of these structures still stand today in Historic Downtown Siloam Springs. A bulletin issued by the railroad in 1924 nicely summarized the community:
Siloam Springs is a picturesque little city of 4,000 people. Running through the town, separating the greater part of the residence district from the business portion is Sager Creek, which is crossed by several bridges and forms a small lake used for boating and bathing.
In the summer season, standing on the bluff overlooking the town, one sees a mass of foliage through which a glimpse of the houses in town can be obtained. The townsite looks like a huge park with several hundred buildings stuck in like strawberries in a shortcake.
There are about twenty springs of pure water within the townsite, which on account of their purity are deemed highly efficient in the relief of rheumatism in its several forms, disorders of the stomach, liver complaint and various other ailments.
Nearly a century later, Siloam Springs retains that distinctive charm, especially along Sager Creek as it meanders through the historic district. Although boating no longer occurs on that small lake, city officials are contemplating plans to bring it back. 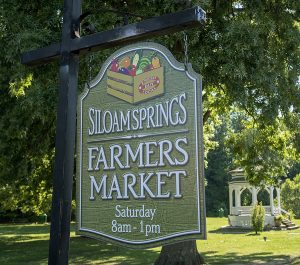 The Siloam Springs Farmers Market is open every Saturday through October.

That close relationship between local leaders — city government, the chamber of commerce, and Main Street Siloam Springs — has made the community one of Arkansas’ up-and-coming stars. Throw in the many significant contributions of John Brown University and the result is a wildly successful partnership.
For proof, just take a quick look at these accolades for Siloam Springs:
• 2012 – One of the Best Small Towns in America –
Smithsonian magazine
• 2014 – One of the Top 10 Main Streets in the Country –
Parade magazine
• 2017 – One of the Best Places to Live in the United States –
Money magazine
• 2017 – The Most Beautiful Town in Arkansas –
Culturetrip.com
• 2018 – The Cutest City in Arkansas – MSN.com
• 2018 – Top 5 Downtowns in America – Small Business
Revolution
Although located only 25 miles west of Northwest Arkansas’ bustling Interstate 49 corridor, Siloam Springs has managed to retain its strong sense of identity. Wayne Mays, president of the Chamber of Commerce, credits the cooperative approach taken by the city’s leadership. “We all believe in place-building — where a community makes the most of what it has,” he says.
And Siloam certainly has a lot going for it. John Brown University, for instance, will celebrate its 100th anniversary next year. John Brown III, whose grandfather established the school nearly a century ago, is particularly proud of the diversity of the 1,200 students enrolled in undergraduate programs. Not only do they come from 45 states, 15 percent of the enrollment is international, with 20 to 25 countries represented. The Walton Latin American Scholars Program alone provides the means for 60 foreign students to attend the university. Brown also notes that many graduates, captivated by the Northwest Arkansas quality of life, choose to remain in the area once their degrees are awarded.
An immediate indicator of that quality of life can be found in downtown Siloam Springs. It’s a clean, vibrant and walkable district, boasting a 90 percent occupancy rate. Calling downtown home are 9 eateries, 26 retail shops, over a dozen businesses delivering professional services, the weekly Farmers Market (every Saturday through October 13) and the annual Dogwood Festival, which occurs the last full weekend in April). More developments in the works include the Ivory Bill Brewing Company, slated to open later this summer. 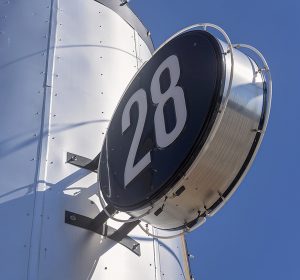 28 Springs is among the top-rated restaurants in Siloam Springs. 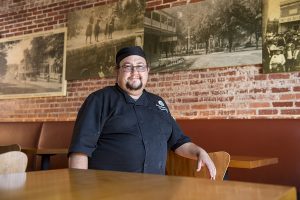 Among the prominent establishments is 28 Springs, TripAdvisor’s top-rated restaurant in the city. Dating from 2012, it features a comforting menu with local meat and produce and home-made breads and a delightfully welcoming bar with 16 beers on tap. Although the talented team in the kitchen won the 2014 World Champion Squirrel Cookoff in nearby Bentonville with an appropriate meatloaf recipe, don’t look for squirrel among the entrées. According to Bryan McKenzie, 28 Springs’ general manager, the Simmons family opened the restaurant to demonstrate their commitment to a renewal of the downtown area. Six years later, 28 Springs has indeed anchored an urban renaissance while garnering a solid reputation in the regional food scene along the way. Among its eclectic offering are avocado fries, a cream cheese gelato and the to-die-for bourbon chocolate pecan pie.

Siloam Springs has a growing reputation for fine cuisine.

Kelsey Howard, executive director of Main Street Siloam Springs, feels her bailiwick is “the hidden gem of Arkansas.” A native of Siloam Springs and a John Brown University (JBU) alumna, she did her post-graduate work at the University of London before deciding to return home, where she could follow her passion for downtown revitalization and sustainability. “The unique combination of a town in a beautiful setting and people who care about their community has resulted in a thriving historic and economic district,” she says.
Another major factor in Siloam’s quality of life is the local parks system. There’s a popular Family Aquatics Center that gets lots of use during the summer months. Residents and visitors alike enjoy the Dogwood Springs Walking Trail that connects downtown with the JBU campus, more or less paralleling Sager Creek. And the City Lake Project, scheduled for completion next year, will include walking and mountain bike trails, a disc golf course, fishing dock and a bird blind. 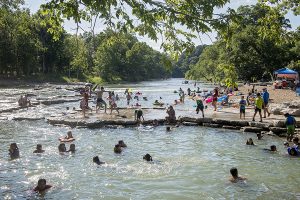 Siloam Springs springs to life in the summertime.

But what really separates the Siloam Springs Parks & Recreation Department from others across the state is the Kayak Park. Located about four miles south of town on the Illinois River, this one-of-a-kind attraction draws tons of visitors to experience the “engineered rapids” by canoe, kayak or inner tube. Opening in the spring of 2014 and made possible by a grant from the Walton Family Foundation, the park was an instant success story. Admission is free, but you’ll need to supply your own watercraft, life jackets and sunscreen.
The electorate in Siloam Springs apparently feels pretty good about the city and its future. By a 73/27 margin, they recently voted to renew a 3/8-cent sales tax earmarked for quality-of-life improvements for the town’s 16,000-plus residents.
Likewise, the editors of Smithsonian magazine feel pretty good about Siloam Springs, describing it as “a town that could model for a postage stamp commemorating the American heartland.” And that, my friends, is a tough description to beat.

A Small Town in the Arkansas Delta Continues to be Reborn
August 3, 2022